So because of Hour of the Wolf’s pre-emption last week, my review of TRANSCENDENCE, the science fiction romantic thriller in which Johnny Depp’s consciousness is loosed on the Web and a number of people — including Rebecca Hall, Morgan Freeman and Cillian Murphy — fret about what that means for the fate of humankind (hint: How do you feel about nanobots everywhere?), was held for airing on this week’s show. Which is cool — I mean, the film, unfortunately, doesn’t live up to the promises of its premise, but the notion of what happens to humanity as it begins to intersect more and more with technology is so potent that I feel an examination of what director Wally Pfister did right and wrong in exploring the concept is still worthwhile. So, tardy though it may be, please enjoy this latest segment.
(Interestingly, HotWolf host Jim Freund so liked last week’s review of 23:59 — which was intended only to run on the Web — that he also included it in this week’s show. So we were actually ahead of the curve in that sense. BTW: If you tried to listen to that segment earlier this week and the player was broken, it’s now fixed. Give it a shot & enjoy!)
Click on the player to hear the review.


It’s some kind of irony that the experience of watching a film called TRANSCENDENCE is far from transcendent. Not that director Wally Pfister doesn’t try: The story of a scientist working in A.I. research (Johnny Depp) who has his own consciousness transferred to the Web is lushly mounted (as befits a big-studio production from the man who previously served as Christopher Nolan’s director of photography), reliant on an atypically grounded mise en scene that emphasizes the love story between Depp’s scientist and his colleague wife (Rebecca Hall),  and chock full of actors who can deliver skilled performances (joining Depp and Hall are Morgan Freeman, Cillian Murphy, Kate Mara and Paul Bettany). Unfortunately, it’s that restraint, along with poor plotting (Really? We’re supposed to empathize with anti-technology terrorists whom we’ve previously seen murdering a roomful of innocent people with poisoned cake? Really?), that leaves the film as a promise unfulfilled.
The Cinefantastique Online team of Steve Biodrowski, Lawrence French, and Dan Persons get together to weigh what went right and what wrong with this ambitious attempt at  dramatic science fiction. Click on the player to hear the show.

Every now and then, we pause in awe of the people we’ve had the opportunity to spend time with. Doug Trumbull, John Kricfalusi, and Paul Verhoeven in earlier years, Armin Shimerman and Frank Oz more recently — now it’s Martin Landau’s turn, and we couldn’t be happier.
In an extended and wide-ranging interview, we got a chance to discuss the length and breadth of Martin’s career. In the course of talking about his roles in NORTH BY NORTHWEST, MISSION: IMPOSSIBLE, and his Oscar-winning portrayal of Bela Lugois in ED WOOD — and much, much more — Martin provides insights on the art of acting, shares anecdotes from the set, and talks about the sometimes seamy politics that drive the film industry. It is, all told, a fascinating exploration of the life of an actor — click on the player to hear the show.

Two hundred years is a long time to revive a vampire, but then again, forty years is long time to revive the first horror soap opera (not counting an earlier, feature adaptation and a TV revival in the ’90s). In Tim Burton’s DARK SHADOWS, Barnabas Collins (Johnny Depp) is cursed into vampirehood by spurned lover Angelique (Eva Green) in the 18th century and is buried alive (undead?) to await his unearthing in the 1970’s. What he finds is the family fishing empire in ruins, the occupants of stately Collinswood manor — including Michelle Pfeiffer as matriarch, Helena Bonham Carter as a drunk doctor, Jackie Earle Haley as a drunker handyman, and Bella Heathcote as a nanny who bears a striking resemblance to Barnabas’ lost love Josette — devolved into feckless dissolution, and Carpenters music everywhere.
Cinefantastique Online’s Steve Biodrowski, Lawrence French, and Dan Persons have seen the film, and sit down to discuss whether Burton’s more comedic take on DARK SHADOWS’ melodramatics are worth the trip back to the Me Decade. Also in this show: What’s coming to theaters.

Here’s the first picture released of Johnny Depp as kind of ‘ghost-warrior’ Tonto and a slightly city-fied Armie Hammer as the Masked Man in THE LONE RANGER.
Radio Ranger actor Brace Beemer often wore a black & white outfit in his public appearances as the character, so it’s not entirely without precedence.
Directed by Gore Verbinski (PIRATES OF THE CARRIBEAN) THE LONE RANGER is due out in 2013 by Jerry Bruckheimer and Walt Disney Films.
Continuing in the western theme, DOCTOR WHO will go West in the third episode of the new season of the revived series, Written by Toby Whithouse (BEING HUMAN).
Actually, it’s south, as Spain is subbing for the American West in the BBC production.

Here’s a pic of Matt Smith donning a Stetson once again for the show, in which Ben Browder (FARSCAPE, STARGATE SG-1) will guest star. Saul Metzstein is directing.
Photo via Whovians.net

Entertainment Weekly is featuring the first official promotion still from Tim Burton and Johnny Depp’s take on the 1960’s Dan Curtis Gothic Soap Opera DARK SHADOWS.
One unauthorized pic of Depp in a dead white make-up and sporting dark glasses and a wide-brimmed fedora had given the impression that the filmmakers might have been going for a Willy Wonka/Michael Jackson look, but this staged group shot offers a more traditional look at the character, though he’s somewhat in the background.
The photo has a look very similar to publicity photos of the ABC original series, and this is completely intentional, according to director Tim Burton.

“I remember seeing a group photograph of the cast of the original series… For me it captured the weird Dark Shadows vibe in a single image.
I had a brief window of opportunity to have our cast present at the same time, the day before principle photography began. We decided to stage a similar picture instead of rehearsing, to see if we captured the Dark Shadows feeling.”

I’d say they succeeded in this photograph, anyway.

According to
Johnny Depp (PIRATES OF THE CARRIBEAN) has been long-signed to play the masked man’s Native American friend and crime-fighting partner in the Jerry Bruckhiemer Production. PIRATES helmer Gore Verbinski (RANGO) is set to direct, from a screenplay by Justin Haythe (REVOLUTIONARY ROAD).
Johnny Depp will first have to complete his role in DARK SHADOWS, due to roll very soon with director Tim Burton. Yet Disney still hopes to ready THE LONE RANGER for release in 2012.
This isn’t the first time Armie Hammer’s been up for a superhero role, he was set to play The Batman in Warner Brothers’ aborted JUSTICE LEAGUE movie. 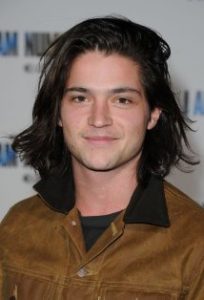