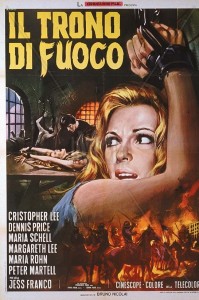 “You are all condemned, for crimes against king and kingdom, to hang… to dangle until you are but dead, to be then cut down still alive, to have your entrails drawn out and thrust into your own mouths, to be further hanged, then quartered like the carcasses of beef you are. You number five hundred, but even if you were five thousand, the execution of this sentence would be just before God Almighty… and may He have mercy upon your souls.” – Lord George Jeffreys.

There is perhaps no more enduring mystery in the world of cinema than the cult reputation of Jesus Franco. Certainly, no filmmaker ever did less to earn more respect from people who should know better. A purveyor of exploitation trash, Franco is viewed as a talent who transcended genre obligations and meager resources, and Exhibit A in his case is The Bloody Judge (original title: Il trono di fuoco), a 1970 production that sees the director for once working with something like a reasonable budget. Sadly, this means only that Franco’s usual cinematic shortcoming are elevated to the level of garden-variety incompetence.
Like 1966’s Psycho-Circus, The Bloody Judge is one of Christopher Lee’s non-horror “horror” films – which is to say, it has enough genre trappings to capitalize on the actor’s status as horror star, but these elements are simply window dressing on a story  that is really something else:  a wanna-be historical epic of political intrigue, upheaval, and warfare. (This misrepresentation of the film as a horror-thriller was compounded in the U.S., where the release was irrelevantly re-titled Night of the Blood Monster.)
Lee plays Judge Jeffreys, a real-life historical character, who is initially seen presiding over the trials of accused witches, who are tortured to extract confessions. Just when viewers think they are seeing Lee’s version of Witchfinder General (1968), the narrative shifts: the witch-hunting turns out to be a gratuitous sideshow; the remaining running time focuses on political foes seeking to overthrow the current regime in England, and most of the people before Jeffreys’ court stand accused of treason. At times, Jeffries seems less like the lead character than a Greek chorus, delivering exposition to explain action taking place elsewhere, though he does occasionally take some action to squelch the uprising.  In short, this is another one of producer Harry Alan Towers’s scatter-shot scenarios (he co-wrote the story as “Peter Welbeck”) and also an example of a modestly budgeted film that couldn’t afford to keep its star around for the duration of production, resulting in a fragmented, unfocused mess, which abandons its most interesting idea to waste time on secondary characters. 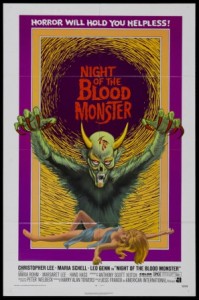 Strangely, there is an interesting idea at the heart of the film – well, not at the heart, but pulsing in one of the outer arteries, blocked from circulating throughout the rest of the system. Though Jeffreys is presented as a merciless judge in public, he privately frets about the severity of the sentences he hands down, continuing in his work only because he believes it is his duty before God and Country, regardless of his personal feelings. This leads to a nice confrontation wherein Lord Wessex (Leo Genn) admonishes Jeffreys, wishing that for once the judge would see one of his abominable sentences carried out, so that his abstract justifications might be tempered by a collision with the awful reality.
In a nifty bit of accidental art, Wessex’s admonition rings true precisely because The Bloody Judge belongs to that breed of exploitation film which, for reasons of budget and schedule, keeps its star well segregated in his own little portion of the film, never allowing him into the torture scenes, which seem to have been filmed separately, with an eye for inclusion on a country-by-country basis, depending on local audience preference for depraved debauchery. Thus, Jeffreys truly does seem completely oblivious to the horrors inflicted because of his judgments.
At the conclusion, Jeffreys – arrested and in jail, awaiting the sort of punishment he has handed out to others – looks out his cell window and for the first time beholds an execution – a sight which provokes a heart attack in the previously stolid judge, who collapses, gasping, “You were right, Wessex. I never knew!”  It’s a strangely affecting moment, well stage and acted, evoking pity for a character who bestowed so little pity on others – a hint of what The Bloody Judge could have been, had its focus remained on the title character.
Sadly, the film spends just about as much time on this dramatic arc as I have spent describing it here; the impact is considerably diluted by the rest of the movie, with its political machinations, espionage, warfare, attempted rapes, aimless brutality, and torture scenes forming a bloody stew of mismatched ingredients.
Had these other scenes been executed with aplomb, their inclusion might have been forgivable, but often they are simply absurd. One “highlight” features Lord Wessex’s son visiting an oracular woman living in a cave: she vaguely warns him of “danger” but neglects to mention that, not sixty seconds previously, the king’s men were in the cave searching for him and are presumably still outside waiting. When he leaves, he almost literally walks right into their arms. (Of course, how young Wessex managed to get past them and into the cave is a question best left unasked, because the film will not bother to explain it.)
Franco admirers cite the mid-film battle sequence as an example of what the director could achieve, given decent resources, but the result is not exactly David Lean in scope; it looks more like a competently executed second-unit scene, whose moderate impact is undermined by foreshadowing that completely oversells the event: a character refers to an army “10,000 strong,” which – even allowing for hyperbole – is laughably wrong. What we see looks more like 50 men on horseback, fended off by half a dozen unsupported canons. Photographing the same horsemen from three or four different angles doesn’t make them seem like 150 or 200 men; it makes them look like the same men photographed from three or four different angles.
Even worse, the geography of the battlefield is so haphazardly presented that it’s never clear why the horseman ride directly toward the canons instead of simply circumventing them and attacking from behind. A few do ride up from behind, but the editing quickly obscures this, in order to keep the scene going, because it’s clear that, even with their small numbers, the horsemen could easily overwhelm the cannoneers  while they pause to reload.
As if this were not bad enough, midway through the sequence, Franco violates the 180-degree rule, switching to a 180-degree reverse angle, so that the cannons suddenly seem to be firing from left to right onscreen instead of right to left. Viewers cannot tell whether the canons have been re-aimed in the opposite direction or whether there is a different battery of canon. Confusion is aggravated by the fact that the cannoneers’ uniforms change from blue to red, and they seem to be shooting at other soldiers in red uniforms. A triumph of cinematic mise-en-scene, it ain’t.
As lame as these cinematic stumbles are, they look like exemplars of cinematic form compared to the torture scenes, which pretend to be the physical manifestation of Jeffreys’ harsh judgments but feel more like gratuitous torture porn. The allegedly serious intent is hardly enhanced by the presence of actor Howard Vernon as the chief torturer Jack Ketch: his skinny frame, dressed in a black-hooded costume, suggests a reject from a Monty Python sketch. 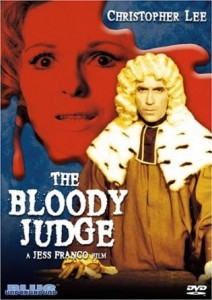 Some of this footage was omitted in the 84-minute version of the film released in 1970, but it’s been lovingly restored in the 103-minute version currently available on DVD and streaming services. The key sequence involves Mary Gray (Maria Rohm), an accused woman who has caught the eye of the judge, who summons her to his quarters. For reasons the film never explores, Ketch does not immediately bring her from the torture chamber as ordered; he has a little fun with her first, apparently unconcerned that his boss might be a little impatient.
Ketch’s “fun” consists of shoving Mary into a cell with a tortured woman, who is either unconscious or dead, and then waiting to see what Mary does. Literally, he gives no orders, forces her to do nothing. Instead, she takes the initiative on her own, kissing and licking the other woman’s wounds. In the liner notes for the DVD, Tim Lucas calls this scene “incredible, transgressive erotica,” but a more accurate description would be risible nonsense. What is presumably supposed to register as horrible humiliation and degradation instead reads as silly soft-core foreplay, as actress Rohm exhibits neither reluctance nor revulsion. It should go without saying that none of her subsequent scenes show any hint that the character has been scarred by this experience, because it is precisely the kind of scene intended to be included only in versions of the film released to specific countries that want a little extra schlock (a theory supported by the fact that, unlike the rest of the film, the restored scene is dubbed in German, with English subtitles – suggesting that the footage was never intended for English-speaking countries).
If this is the evidence that’s supposed to prove Franco’s genius, I remain unconvinced, but in spite of its manifest shortcomings, The Bloody Judge did keep me watching until the end, if only for the benefit of seeing Lee in a mildly interesting role in a historical film. The Bloody Judge lacks the class and craftsmanship of the Hammer Film productions that made Lee famous, and the Jeffreys lacks the iconic stature of Lee’s Count Dracula, but at least the villainous judge is given a tiny note of interest. (Fortunately for Lee, the actor would appear in a high-class period costume piece a few years later, The Three Musketeers.) Apart from Lee, The Bloody Judge has little to recommend it to anyone who has not already succumbed to the dubious allure of Franco. It’s beautifully shot but inept in storytelling and execution, and even its sleazy excesses are more laughable than shocking. This Judge has been weighed on the scales of cinematic justice and found wanting.
THE BLOODY JUDGE (Original title: Il trono di fuoco [“The Throne of Fire”]; also known as NIGHT OF THE BLOOD MONSTER, 1970) Produced by Arturo Marcos, Harry Alan Towers. Directed by Jesus Franco. Written by Enrico Colombo, Jesus Franco, Michael Haller; story by Harry Alan Towers, Anthony Scott Veitch. Cast: Christopher Lee, Maria Schell, Leo Genn, Hans Hass Jr., Maria Rohm, Margaret Lee, Howard Vernon. 103 minutes.