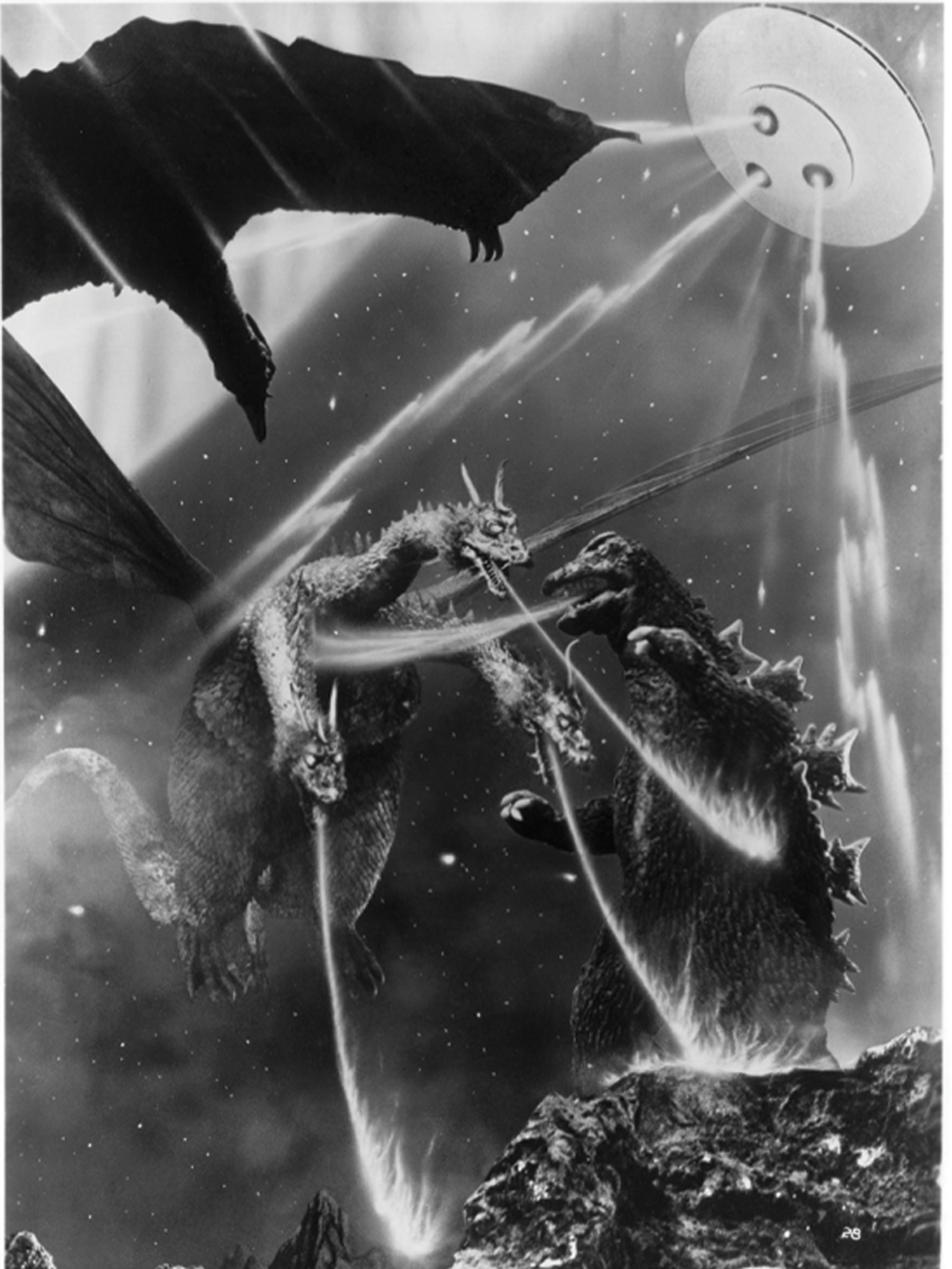 This sequel to GHIDORAH, THE THREE-HEADED MONSTER is one of the best entries in the long-running series of Godzilla films from Japan’s Toho Studios. Although the serious tone of the original GODZILLA (a.k.a. GOJIRA, 1954) were long gone, INVASION OF ASTRO MONSTER (originally released in the U.S. as MONSTER ZERO) stands out as a colorful, fun, and exciting romp of a movie. The special effects are spectacular if not altogether convincing; the action is outrageous; the story is fast-paced. And best of all there is some genuinely charming character interaction, thanks in large part to the presence of American co-star Nick Adams, who has wonderful chemsistry with Japanese star Akira Takarada and generates firey romantic sparks with leading lady Kumi Mizuno. The plot has the inhabitants of the newly discovered Planet X requesting help from Earth: the loan of the monsters Godzilla and Rodan to defeat the interplanetar menace Ghidorah, known on Planet X as “Monster Zero.” The duplicitous X-ians then double-cross Earth, demanding that it submit to Planet X or else face the wrath of all three monstes, whom the X-ians control with radio waves. This leads to a frantic effort by Earth’s forces to destroy the X-ians control of the monsters and drive the invaders from our planet.
MONSTER ZERO is atypical for the Godzilla series in that the monsters play a subordinate role, with most of the screen time devoted to the human characters and their conflict with Planet X. Except for a couple of brief skirmishes, Godzilla, Rodan, and Ghidorah barely appear in the first half; the film saves them for the climactic battle at the end. This approach bears some fruit: with fewer scenes to work on, the special effects crew seems to do a better job, although, unfortunately, some stock footage is used (from RODAN and MOTHRA) to augment the miniature destruction scenes.

The film’s original Japanes title “Kaiju Daisenso” translates as “Giant Monster War.” “Invasion of Astro Monster” was the “International Release” title used when Toho sold the film overseas. In the U.S., the film was released to theatres in 1970 (on a double bill with WAR OF THE GARGAUNTUAS) as MONSTER ZERO. For later release on VHS, laserdisc, and DVD, the title was expanded in the box artwork to GODZILLA VS. MONSTER ZERO.
The Toho Masters Collection box artwork uses the International release title “Invasion of Astro Monster,” but the English subtitles for the Japanese version of the film translate the title as “Invasion of the Astro-Monster” (an understandable discrepancy, as the Japanese language does not contian articles like “a,” “an,” and “the,” so translators must insert them at their own discretion). The English-language version of the film on the DVD retains the old U.S. title MONSTER ZERO.
MONSTER ZERO is one of the first Godzilla films to reach U.S. shores with only minor editorial alterations for U.S. release (besides the English-dubbing, of course). The opening credits substituted an eerie, ominous theme in place of the original’s rousing military march (a common element in scores by series stalwart Akira Ifukube). Some Japanese language writing and newspaper headlines were changed to English. And the Controller of Planet X is no longer heard speaking in his native tongue. Toho prepared an English-dubbed version of INVASION OF ASTRO MONSTER that retains these missing pieces, plus a brief shot featuring the original sound recorded on set, pre-dubbing, so that you hear Akira Takarada speaking in Japanese while Nick Adams responds in English

The Toho Masters Collection DVD (ASIN: B000OCY7IK) offers the original Japanese version of the film, with optional subtitles, under its international release title INVASION OF ASTRO MONSTER, plus The Americanized English-language version, known as MONSTER ZERO. Also included are: 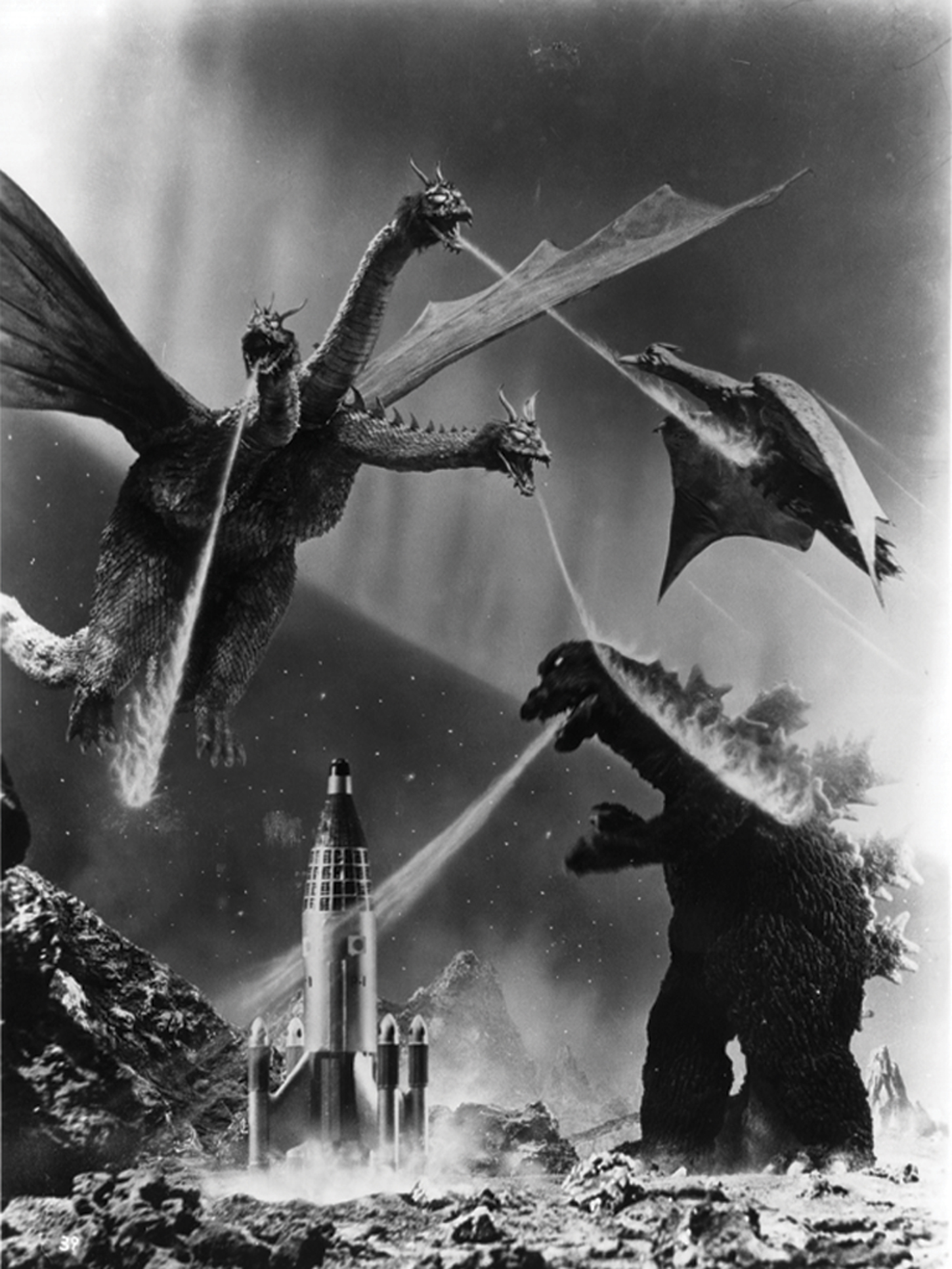 Like the other Toho Masters DVDs, this one comes in a shiny, hard DVD case with a colorful Japanese poster on the front and a nice black-and-white still photograph on the inside front cover.
The transfers for both version of the film offer a clear colorful widescreen image with good sound. In general the picture quality is comparable with the out-of-print Scimitar DVD from the 1990s.
There is a slight improvement in that the Toho Masters disc has a few more chapter stops, but as with the Scimitar DVD, the chapter stops do not do a much improved job of helping you jump to your favorite moments. For example, both DVDs have a chapter stop for the three-way battle on Planet X that begins with a boat arriving at an island on Earth, followed by an extensive dialogue scene, before finally shifting to outer space for the promised action.
The trailers offers a nice glimpse of what filming must have been like. Edited together before the film had been dubbed, the trailer includes live sound takes from the filming, with American star Nick Adams speaking English to his Japanese co-stars, who respond in their native language.
The image galleries are small but impressive. Unlike most DVD galleries, these feature informative captions that induce you to actually stop and look at each individual image, instead of thumbing through all of them without pause. The information for the posters is especially useful, because the film was released several times: in Japan, in American, then in Japan again (in an edited form as part of a series of kiddie matinees called the “Champtionship Festival”). It’s nice to have the different art work identified according to which campaign it supported.
The video biography of Tanaka is on par with biographies on other Toho Masters DVDs: it’s reasonably informative, provides some interesting background details, and hits the high marks in the producer’s career. Long-time fans may not learn much new, but they will find it interesting.
Unfortunately, Gailbraith’s audio commentary is a disappointment. Although thoroughly well-versed in the subject, he seems to have little to offer in terms of analysis; instead, he falls into the trap of filling the time by identifying each and every Toho stock player who walks on screen, then giving an extensive biography and filmography. This may be justified in the cases of Akira Takarada and Kumi Mizuno, who had long associations with the Godzilla franchise, but after awhile it wears thin.
We would have been more interested in hearing details of the differences between the two versions of the film: although MONSTER ZERO is one of the least re-edited Godzilla movies, the Japanese cut still runs over a minute longer than the American version.
Galbraith also derides the English-dubbing of the film. More often than not, the original Japanese versions of the Godzilla films are preferable, but in this case we should make some allowances for the fact that there is an English-speaking star in the lead. The English audio track is marred by some notable groaners (e.g., the hysterical, unidentified cry of “Look out the window!” when a flying saucer appears over the Earth space headquarters). More often than not, however, it works. It was certainly an eccentric choice to give the undercover aliens on Earth voices that sound like movie gangsters, but they do dress and act a lot like gangsters, so why not? Galbraith complains (as he did in Monsters Are Attacking Tokyo) the Yoshio Tsuchiya’s vocal performance as the Controller of Planet X is lost in translation, but the real strength of his performance lies in his gaggle of eccentric hand gestures; the only thing truly lost are the few moments when he spouts his (reportedly improvised) alien language.
Even if you already own the ouit-of-print Scimitar DVD (which was re-released by another company shortly after Scimitar went out of business), it may be worth you while to pick up the Toho Masters Collection Disc. The bonus features are much better, and it is nice to finally have an opportunity to see the original Japanese version of the film; even if the differences are only minor, fans will want to check them out. 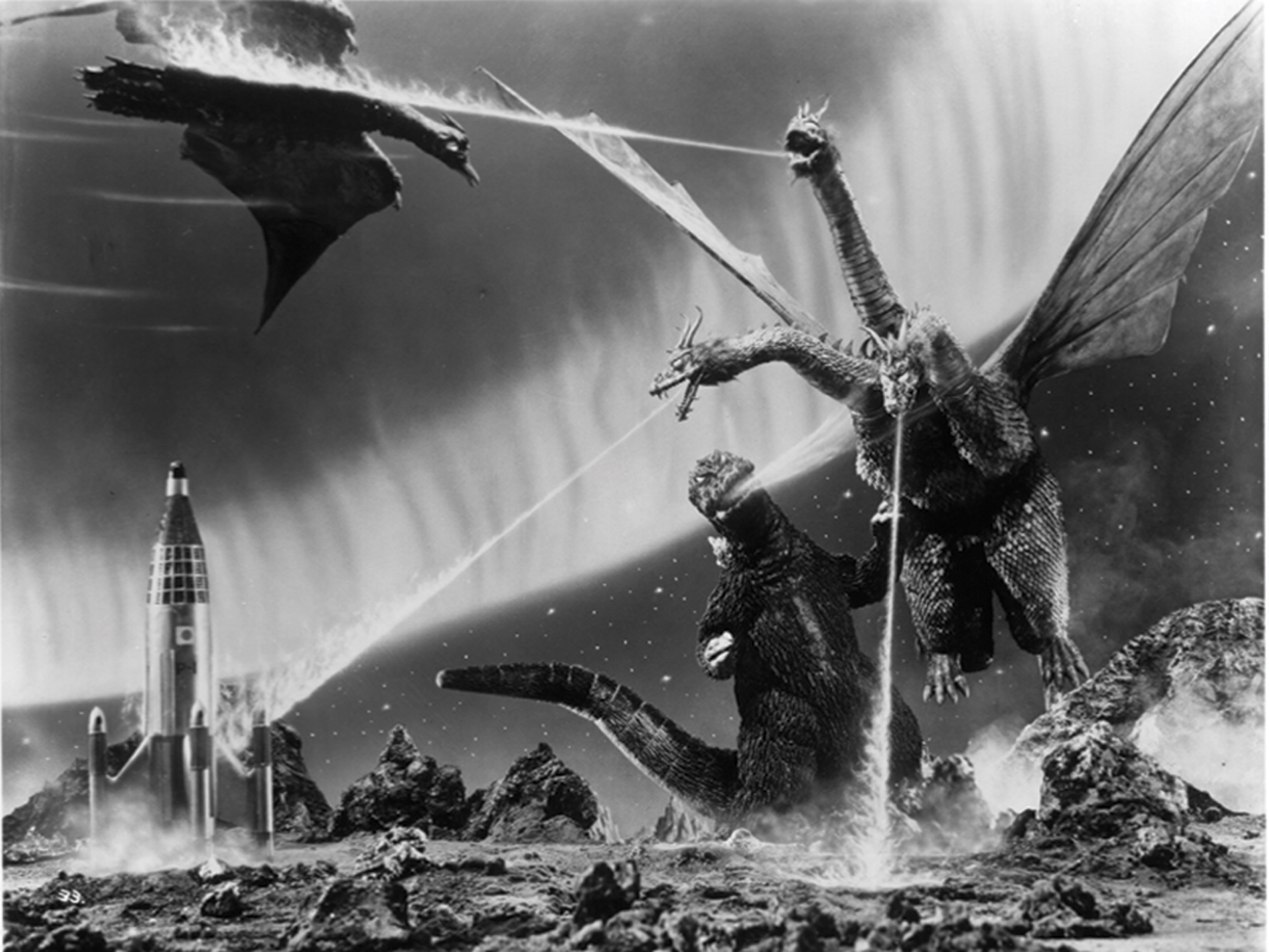