Deadline reports that 20th Century Fox, is developing  a live-action feature film version of adaptation of Issac Asimov’s 1954 novel The Caves of Steel.
Simon Kinberg,  (X-MEN writer) is producing via his Genre Films production company, based at Fox. Henry Hobson is attached as director, with John Scott 3 (yep, that’s his moniker)  set to write the screenplay.
Hobson is know primarily as a titles designer for films such as SHERLOCK HOLMES and RANGO, while Scott 3 works with the Chandra X-Ray Observatory, Seems like an odd pairing, but the two are first collaborating on a teenage Zombie film entitled MAGGIE.
Asimov’s The Caves of Steel was first published as a serial in Galaxy Magazine in 1963, and quickly picked up as a novel by Doubleday.
The tale is a murder mystery sent on an over-populated Earth about three thousand years in the  future. Here agoraphoic humans live in domed cities and rarely if ever see the outside world.
The rich and powerful Spacers’ (people whose ancestors left Earth for other planets) ambassador has been murdered and police detective Elijah Baley is forced to work with their chosen investigator,  the humanoid robot R. Daneel Olivaw.
This is a double-edged insult, as the Spacers are generally too disdainful and suspicious of Earthmen to spend time in their presence, and robots are equally distrusted and restricted on  Earth. Bailey and R. Daneel slowly come to bond during the potentially explosive investigation.
The book was a great success, and lead to the sequels  The Naked Sun and The Robots of Dawn . The  characters have ties to Asimov’s Robots series and, more loosely to the Foundation series.
THE CAVES OF STEEL was previously adapted for live action on BBC televsion in 1964 starring Peter Cushing as police detective Elijah Baley and John Carson as R. Daneel Olivaw. That version, directed by Peter Sasdy, with a teleplay Terry Nation (DOCTOR WHO, BLAKES 7),  is considered lost, with only a few fragments remaining.


Tuesday, October 5 is overflowing with horror, fantasy, and science fiction titles of all shapes and sizes arriving on home video in various formats: DVD, Blu-ray, and iTunes downloads. The best of the new releases is SPLICE, which arrives in two versions, DVD and Blu-ray. When it hit theatres earlier this year, Vincenzo Natali’s sci-fi horror opus was a bit misrepresented by its advertising campaign, which suggested a SPECIES-type monster movie. Instead, audiences got a thoughtful science fiction film with an overlay of dark satire.
Also out this week is A NIGHTMARE ON ELM STREET, the unnecessary (and unnecessarily dull) remake of writer-director Wes Craven’s 1984 classic. The new version is slickly made but typically soulless. Somewhat less typically, it is also almost entirely devoid of shocks and suspense. Give this one a pass.

This is one of those rare weeks when classic titles are overwhelming new releases, thanks to some deluxe editions that surpass and eclipse previous home video versions. Horror fans disappointed by the ELM STREET remake can take solace in Warner Brothers Home Video release a two-disc Blu-ray of THE EXORCIST (1973), which includes the original theatrical cut and the so-called “Extended Director’s Cut,” plus three new documentaries. The film is also being made available for download via iTunes for the first time. The extended cut is just a new name for the 2000 theatrical re-issue of the film, which at the time was dubbed “The Version You ‘ve Never Seen” – a sobriquet that hardly makes sense ten years later. Even if (like me) you have previously purchased both versions of the film on DVD (including the excellent 25th anniversary edition), you will find much worth viewing on this disc, thanks to previously unreleased behind-the-scenes footage that provides an amazing glimpse at the making of this horror classic.

If your tastes run more toward fairy tale fantasy, you are in luck: Walt Disney Home Video is releasing a 3-disc Diamond Edition of BEAUTY AND THE BEAST, their 1991 Oscar-nominated blockbuster, which has been unavailable in any form since 2003. (This combo pack will be followed seven weeks later by a 2-Disc standard definition DVD on November 23.) The 3-disc set includes one DVD and two Blu-rays. The DVD features an all-new digital restoration, three versions of the film, sing-along mode (with subtitles for the lyrics), and an audio commentary. The first Blu-ray disc includes the DVD bonus features and the three versions of the film (in high-def, of course), plus more extras, including previously unseen alternate opening and a deleted scene. The second Blu-ray disc offers the bonus features from the old Platinum Edition DVD, plus some new Blu-ray extras, including “Beyond Beauty – The Untold Stories,” “Enchanted Musical Challenge Game,” and “Bonjour, Who is This” – a game in which you use your phone to receive secret messages and guess players’ identities before they guess yours.

In a move no one could ever have expected, the abysmal TROLL 2 receives a Blu-ray release this week; the format seems altogether too refined by the cheezy little movie, which has gained some cult notoriety this year, thanks to the art house release of BEST WORST MOVIE, the documentary tracing the lives and reunion of some of the TROLL 2 cast members.
MGM Home Video offers the MGM Sci-Fi Movie Collection. Unfortunately, the company’s 1956 classic FORBIDDEN PLANET is nowhere to be seen. Instead, we get one  (WAR GAMES) and a bunch of forgettable duds (SOLAR BABIES, ALIEN FROM L.A. with Kathy Ireland, HACKERS with a  young Angelina Jolie film, SPACE CAMP, and a WAR GAMES sequel).

Apparently, bargain days have arrived this week, with several previous available titles re-released in two-packs: GROUNDHOG DAY and SO I MARRIED AN AXE MURDERER, HANCOCK and GHOST RIDER, THE GRUDGE and SILENT HILL, BRAM STOKER’S DRACULA and WOLF, FANTASTIC FOUR and X-MEN, THE DAY THE EARTH STOOD STILL and I ROBOT, plus several others.
But wait, there’s more! Also on store shelves this week:

And the list goes on and on… All are available in the Cinefantastique Online Store. Click the links below to check them out, or go here.
[serialposts]

The L.A. Times says “sources” tell them that John Davis, a 20th Century Fox-based producer who was involved with ALIEN Vs. PREDATOR and the will Smith vehicle I, ROBOT has optioned the rights to Ray Bradbury’s The Martian Chronicles.
The book is a loosely connected selection of short stories, some that have little to do with the planet, others that are more refelctions on Bradbury’s feelings about a view of Mars that he read about and loved as a child, and knew as an adult writer had no substance in reality. So many of them are delicate fables, morality tales, or slight slices of subdued nightmare.
Trying to adapt them into a cohesive science fiction narrative is somewhat akin to attaching a jet engine to a child’s kite made of newspaper and balsa wood. 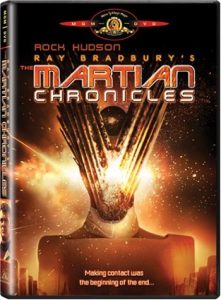 Richard Matheson made a game attempt in the TV mini-series THE MARTIAN CRONICLES (1980).
Despite a cast that included Rock Hudson, Roddy McDowall, Darren McGavin, Barry Morse, Bernadette Peters, and Fritz Weaver, the production was generally turgid and disappointing, though with a few moments that captured the magic of some of the stories. Variable production design (from imaginitive to extemely bland), and substandard FX work gave it a slightly cheezey look.
Various stories from The Martian Chronicles that appeared on the very low-budget RAY BRADBURY THEATER worked as well or better, freed of the need to link together.
So, the idea of a major feature film version of a short story collection does not strike me as a very good idea. Could the rights have been obtained to make a film like I, ROBOT (2004)?
That film was based on a screenplay called Hardwired that Fox liked, and had some similarity to Issac Asimov’s robot stories. So, since they had the rights to the I, Robot collection, the Susan Clavin character and Asimov’s Three Laws of Robotics were inserted into the story.
The results were an entertaining Sci-Fi action-murder mystery that held little savor for readers of the original stories.
Will the same road be taken? Only time will tell.