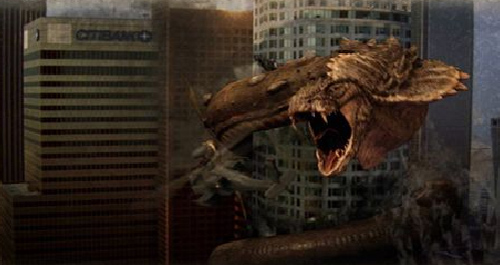 Thanks to the American Cinematheque and Freestyle releasing, Hollywood horror fans got a sneak peak at DRAGON WARS, the Korean produced fantasy film opening Friday. A premiere was held at the venerable Egyptian Theatre, home of the Cinematheque, with many of the cast and crew in attendance: writer-director Hyung-rae Shim and actors Jason Behr, Amanda Brooks, and Robert Forster.
Outside the theatre, the courtyard was filled with paparazzi snapping photos and shooting video of the celebrities, posed in front of a wall of poster art from the Korean-produced film. The usual casual attire seen at Cinematheque screenings was replaced by sleek, black suits and swanky dresses, creating the aura of a genuine event – the people behind this film really seem to think it will do some business.
Inside, Keith Aiken (of scifijapan.com) briefly introduced the film. Two representatives from Freestyle Releasing, the film’s American distributor, made some comments, filling in details about how D-WAR (as it’s known in its native land) managed to earn a wide release stateside. The gist of the tale is that, after the release of THE HOST (which did okay on the art house circuit but did not break out to wide circulation), someone brought a DVD of D-WAR to Freestyle, hoping for a 1,000-theatre opening. Initial skepticism on the part of Freestyle gave way after viewing a sample of the spectacular effects scenes, but what really sold the company was when D-WAR’s debut in Korea earned $20.5-million worth of tickets in its first five days, going on to tally over eight million tickets sold – enough to indicate that the film had the makings of a blockbuster. Consequently, the proposed 1,000 theatre release was expanded to over 2,000.
After the prefatory remarks, DRAGON WARS unspooled for the enthusiastic audience. Without getting into a full-length review here, it became apparent all too soon that the most compelling story about DRAGON WARS is the behind-the-scenes tale of how the Korean film managed to secure a wide release in the U.S. It’s unusual for a foreign production to receive this treatment, but DRAGON WARS is not your typical art house effort. Shot largely in Los Angeles, with English-speaking actors, the film seems deliberately designed to avoid the fate of most foreign hits (e.g., RING, JU-ON): that is, having the remake rights sold while the original is shunted off to video. DRAGON WARS is obviously intended as an American-style blockbuster; unfortunately, the film suffers from the flaws that mar American spectacles: the story is weak when it’s not outright silly; there is little if any attention lavished on the characters and performances; and all the real imagination seems to have been devoted to the special effects.

The good news is that, despite the dramatic weaknesses and gaping plot holes (no doubt due to removing fifteen minutes to speed up the pace of the U.S. cut), DRAGON WARS works because it delivers spectacular monster action. The special effects set pieces are brilliantly conceived and executed; it not utterly convincing, they are less cartoony than similar footage in many American films, and there is an impressive attempt at using light and shadow to make the beast seem truly like a part of the environment.
The audience ate it up, delivering ringing rounds of applause, and actor Robert Forster, who was sitting across the aisle from me, expressed his enthusiastic endorsement. (Despite his short screen-time and a conflict with a current acting gig, he had made a special effort to attend the screening.)
At the reception afterwards, most of the comments were positive, although the flaws did not go unnoticed. The general consensus was that DRAGON WARS is front-loaded with complex exposition that might not be clear to American viewers, and some of the big dramatic moments might have more resonance with Korean viewers (as when a mystical talisman, at a crucial moment, comes to life with a powerful, glowing burst of energy that saves the hero). I eagerly championed this theory, based on the evidence of two Korean gentlemen who had been sitting beside me during the screening: they had gasped in awe-struck simultaneous whispers recognition at each such juncture as we were describing: “OHHHHHHHHHHHHHHHHH!” I remembered feeling vaguely jealous that they were obviously getting more of the film than I was.
Of course, premiere audience reactions, with the filmmakers – and their friends and family – in attendance, can be misleading. It will be interesting to see how DRAGON WARS goes down with a general audience, but it does have the potential to be a sleeper hit with audiences eager for more TRANSFORMERS-type battle action in the streets of a major city. And we all know that the rest of the country – jealous of Los Angeles because we have the film industry, good weather, beaches filled with beautiful women – are probably eager to see the town destroyed by rampaging reptiles.
[serialposts]