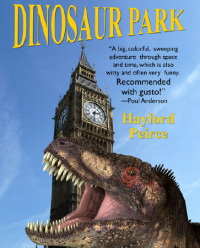 The convoluted plot of Dinosaur Park is kicked of by a prank played by a ten-year-old Kerryl Ryson of the dinosaur planet Stohlson’s Redemption.
Egged on by his seven-year-old bride to be, he causes a dinosaur to upchuck on a visiting offworlder, the Immaculate Ultim of Aberdown. This isn’t taken as a youthful indiscretion; a soldier is killed in the ensuing melee, leading to a trial in which results his father is executed by a Tyrannosaurus, and his clan’s sacred fetish lost as they are given into slavery to the Ultim.
Kerryl’s taken by the religious Jairaben dinosaur breeders to their enclave to serve as a probationer–essentially a slave, until his final judgement/conversion on reaching maturity.  He’s nearing that stage when the arrival of the Contractionites, in their ship the Divine Providence, arrives–providentially.
He’s been honing his wiles over the years, gaining a measure of revenge against his fanatical tormentors, and after saving some of the Contractionites’ child missionaries from death, sees his chance to escape with the space-traveling evangelists and begin his plan to somehow save his kinsmen and avenge his father’s death.
His training continues as part of the military arm of the (theoretically) well-intentioned group — they’re out to try to stop the very contraction of the universe, as they encounter planets and religions every bit as crackpot as their own.
As you may have guessed, Dinosaur Park is a farce from beginning to end, taking aim at religion, bureaucracy, hypocrisy, pomposity, and arrogant (and deadly) elitism. Apparently, it’s intended as a direct parody of Jack Vance’s space operas–and I suspect it will read a lot funnier to those intimately familiar with his work (such as The Dragon Masters, The Last Castle and other awar-winners).
For the rest of us, the language and intricate descriptions of inconsequentials, and elaborate build-ups of matters that turn out to have little or no bearing on the plot get a little heavy and tiresome at times. The gallows humor is generally more risible than laugh-inducing, and often fairly predictable.
Fortunately, just about at the point where one’s patience with the style and Kerryl Ryson’s trials might well become exhausted, an actually interesting science fictional idea is presented. This, along with a new character, makes the last third of the book a real pleasure to read. This new character? A “blurg” named Yveena Soolis, who arrives just in time to become Kerryl’s love interest — twice.
Originally released in 1989, the novel was also known as The Thirteenth Majestral, a title that makes a great deal more sense within the context of the story than the very misleading Dinosaur Park.
DINOSAUR PARK, by Hayford Peirce
Wildside Press, 258 pages / trade paperback
U.S. $9.95 (trade pb), U.S. $6.99 (ebook / multiplatform availability)
Pub date: 3/31/2010
ISBN: 1-4344-1249-0
Distribution channels:
Paperback: Ingram, Baker & Taylor (all online bookstores)
Ebook: Fictionwise, Amazon Kindle, Mobipocket, DrivethruRPG, Content Reserve
Wildside Press web site: WildsidePress
A note to the curious: No scene remotely like the one depicted on the cover takes place in the book.