Ever since WHITE ZOMBIE (1932) introduced movie audiences to the classic image of the zombie (a mindless revived corpse, directed by a Voodoo houngan [priest]), the restless dead have been shambling across the silver screen in various shapes and sizes, eventually throwing off the shackles of their masters and developing strange new appetites (first for human flesh, then for brains). Here is a representative sample.

WHITE ZOMBIE (1932): Murder Legendre (Bela Lugosi, left) directs his mindless minions. The corpses have no will of their own; the film’s true monster is their master.
*

REVOLT OF THE ZOMBIES (1936): This week follow-up to WHITE ZOMBIE posits the idea of an unstoppable undead army in WWI – offering the first suggestion of zombies as a worldwide threat.
*

THE GHOST BREAKERS (1940): This is probably the first zombie film to mix horror and comedy. Although the zombie (Noble Johnson) is revealed to be a fake planted to scare away Bob Hope and Paulette Goddard, his scenes are played for scares more than laughs.
*

KING OF THE ZOMBIES (1941): Comic actor Mantan Moreland gets some laughs from his reaction to traditional-looking zombies, who turn out to be under the direction of a Nazi scientist.
*

I WALKED WITH A ZOMBIE (1943): Darby Jones as the zombie Carrefour, in the classic produced by Val Lewton. The Voodoo element is strongly represented here. Directed by Jacques Tourneur, this is probably the greatest film every made using the traditional zombie theme.
*

ZOMBIES OF MORA TAU (1957): This low-budget effort is memorably only for the novel concept of water-logged zombies guarding a sunken treasure.
*

NIGHT OF THE LIVING DEAD (1968): Though the word “zombie” is never mentioned, George A. Romero’s film changed the genre forever, reinventing the walking dead as cannibal corpses, driven by instinct to consume the living. Romero wrote but did not direct the 1990 color remake – a worthwhile film, but not classic.
*

TOMBS OF THE BLIND DEAD (1971): Amando de Ossorio’s film introduced the zombie-like Knights Templar, who would return in three sequels. Despite their desiccated appearance, the Templars were more of an undead cult than mindless corpses.
*

LET SLEEPING CORPSES LIE (a.k.a., THE LIVING DEAD AT MANCHESTER MORGUE, 1974): This Spanish film, obviously inspired by NIGHT OF THE LIVING DEAD, is the first to show zombie cannibal carnage in color.
*

DAWN OF THE DEAD (1978): George A. Romero’s sequel to NIGHT OF THE LIVING DEAD offers cinema’s first vision of the zombie apocalypse, which plays out in the microcosm of a shopping mall. Tom Savini’s graphic makeup effects, including exploding heads and disemboweled intestines, set the standard for all zombie films to follow.
*

ZOMBIE (a.k.a., ZOMBIE 2, 1979): Directed by Lucio Fulci, this Italian film combines the graphic splatter approach of DAWN OF THE DEAD with the zombies’ more traditional roots in Voodoo. The result, presented as an ersatz sequel to DAWN OF THE DEAD (which was released as ZOMBIE in Europe) launched an army of Italian zombie gorefests.
*

THE BEYOND (1981): Director Lucio Fulci offers two kinds of living dead: corporeal walking corpses and a more magical variety, able to appear and disappear at will.
*

THE EVIL DEAD (1981): Sam Raimi’s sleeper hit features human bodies possessed and sometimes resurrected by evil spirits. The grim, low-budget intensity echoes THE TEXAS CHAINSAW MASSACRE. The 2013 remake emphasized the possession angle, so that there were few if any walking corpses on screen.
*

DAY OF THE DEAD (1985): Romero’s third living dead film presents us with the world’s first “domesticated” zombie, Bub (Sherman Howard), capable of some primitive human thought. Romero would continue to explore the zombie apocalypse in LAND OF THE DEAD, DIARY OF THE DEAD, and SURVIVAL OF THE DEAD.
*

THE SERPENT AND THE RAINBOW (1988): Wes Craven’s film, based on a non-fiction book, returned zombies to their West Indies roots, suggesting a realistic explanation: drugs to induce mindless catatonia.
*

28 DAYS LATER (2002): Instead of traditional zombies, director Danny Boyle’s film featured living people infected by a virus that drives them to mindless homicidal rage – an idea used by George A. Romero way back in THE CRAZIES (1973). The sequel 28 WEEKS LATER expands upon and surpasses the original.
*

DAWN OF THE DEAD (2004): This remake of Romero’s classic substitutes speedy zombies in place of the familiar shambling walkers. It’s entertaining in a slick professional way, with some good characterization, but it lacks the social satire of the original.
*

SHAUN OF THE DEAD (2004): Riffing off Romero’s films, this comedy combines the zombie apocalypse with a love story; the end offers another glimpse of a domesticated zombie.
*

[REC] [ (2007): This Spanish film filtered zombies through the lens of a hand-held shaky-cam, in the style of “found footage” films. The explanation for the zombies is a combination of virus and supernatural evil, an idea explored in the first of two sequels. There was also an American remake, QUARANTINE.
*

I AM LEGEND (2007): Are they vampires or zombies? It’s not clear, but thanks to the star power of Will Smith, this adaptation of Richard Matheson’s novel reached a wider audience than any zombie movie before.
*

DEAD SNOW (2009): Nazis-had been done before but never better than in this somewhat comic horror film from Norway
*

ZOMBIELAND (2009): This took the 28 DAYS LATER concept of zombies as virus-infected-humans, and mainstreamed it for the masses with a comedic approach, achieving blockbuster success.
*

THE CRAZIES (2010): This remake of George A. Romero’s 1973 film offers another version of viral zombies – not the living dead, but infected humans.
*

THE WALKING DEAD (2010-2013): This AMC series, based on Robert Kirkman’s graphic novel, hews close to the zombie concept laid down by Romero but appealed to non-genre fans with its characterization and story-telling. The graphic make up and effects are courtesy of Greg Nicotero, who had assisted Tom Savini on DAY OF THE DEAD.
*

WARM BODIES (2013): This comedy-romance gives us zombies with a heart as “R” (Nicholas Hoult) finds his human emotions revived when he falls in love with Julie (Teresa Palmer).
*

WORLD WAR Z (2013): This big-budget blockbuster played out the zombie apocalypse on a bigger scale than ever before.
[serialposts] 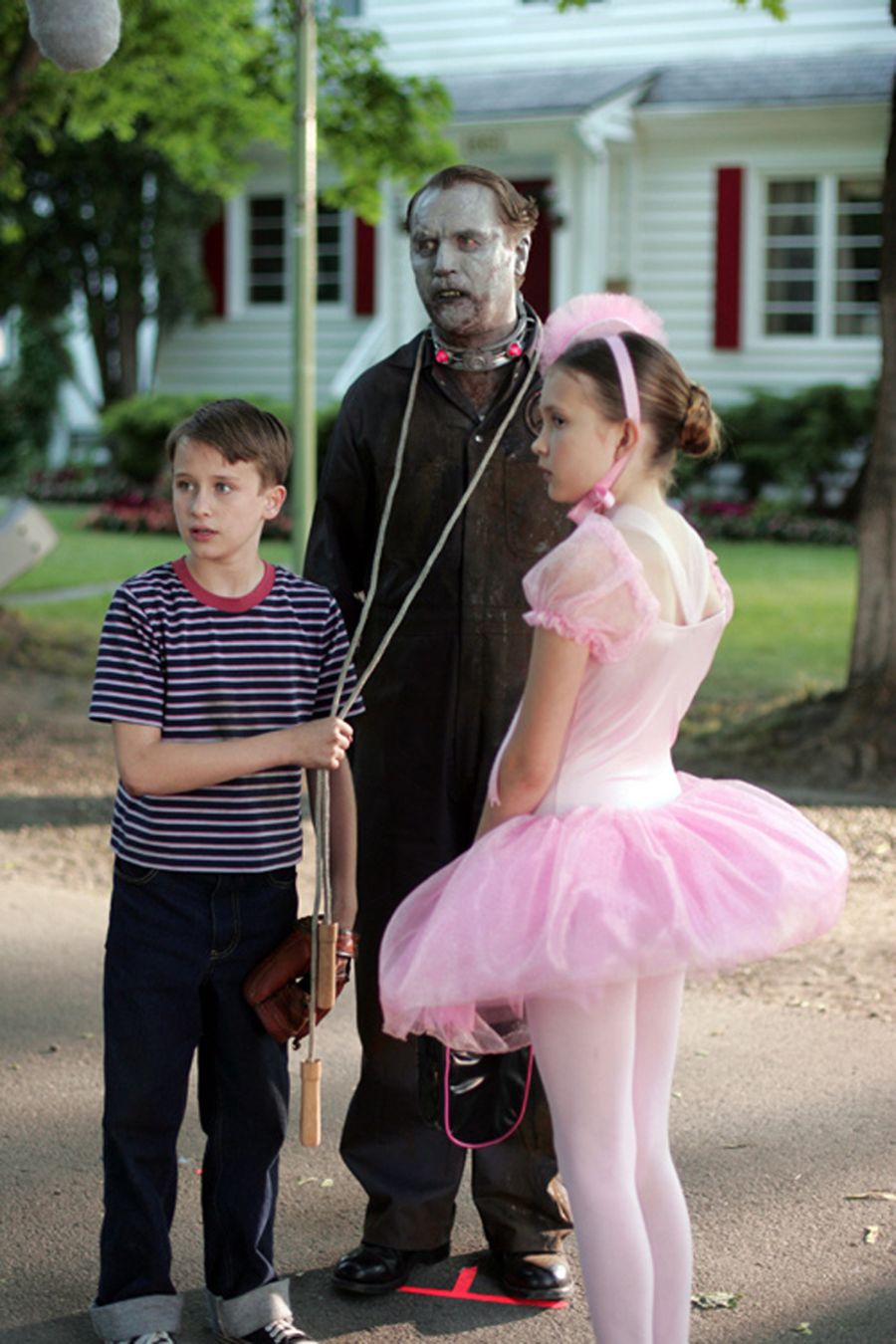