Hard enough bringing a science fiction novel as beloved, respected, and influential as ENDER’S GAME to the screen — the scenario in which a young boy is groomed for leadership in an interstellar war through a psychological process that both isolates him and nurtures his proclivity for violence would be a challenge for the finest of directors. Then, throw in author Orson Scott Card going on record with some repugnant thoughts about gay rights (which have been disavowed by people involved with the production), and the factors arrayed against success, both within and without the project, are raised exponentially. So it has to be said that director Gavin Hood has accomplished this not-inconsiderable challenge by rallying a respected cast — including Asa Butterfield as reluctant military mastermind Ender Wiggin, plus Harrison Ford and Ben Kingsley as the soldiers responsible for turning innocent children into remorseless killers — to an adaptation that, to a great extent, honors the book’s challenging themes. The question remains: Does that make a good film?
And that, it turns out, is a more complicated issue. In the most dramatic divergence of opinion ever heard on the Spotlight, beabetterbooktalker.com‘s Andrea Lipinski joins Cinefantastique Online’s Steve Biodrowski, Lawrence French, and Dan Persons to debate what Hood and team have gotten right in this big-budget adaptation, and where they’ve faltered. It’s an energetic, revealing debate about one of the most important tales in science fiction literature, and whether its path to a mainstream audience was a worthy one. Plus: What’s coming to theaters next week. 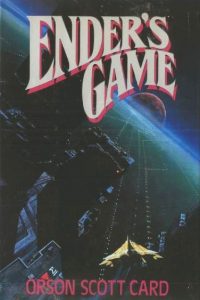