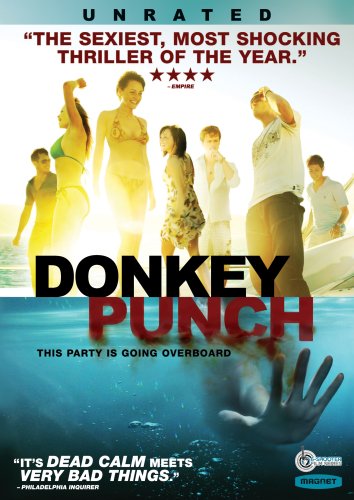 Oliver Blackburn’s horror-thriller had only limited release in the U.S. earlier this year, before arriving on DVD in April. The disc’s cover offers a comparison to DEAD CALM; unfortunately,  DONKEY PUNCH is not in the same league with Phillip Noyce’s memorable yacht-based thriller, starring Nicole Kidman, Billy Zane and Sam Neil.
Donkey Punch centers around three girls, relatively nice girl, Tammi (Nicola Burley), blond slut Lisa (Sia Breckin) and tough girl Kim (played by Ray Winstone’s daughter, Jaime Winstone). The girls are holidaying in Spain to take Tammi’s mind off her recent split from her cheating boyfriend. Within the opening minutes, they are drinking and picking up the boys. The boys in this case are Bluey ([Tom Burke), Josh (Julian Morris) and Marcus (Jay Taylor). The boys invite the girls to ‘play’ on their yacht. Actually, the yacht belongs to their boss, but while the boss is away…..
Aboard the yacht, they meet up with Josh’s brother Sean, and the party gets into full swing. After heading out to sea and weighing anchor, Bluey encourages the rest of the group to partake of his drugs stash; none of them need much encouraging, and before long they are all stoned. In a drug induced stupor, two of the girls and three of the boys head for the bedroom, leaving the most sensible pair, Tammi and Sean on the deck.
In the bedroom things quickly get heated, in one of those uncomfortable-to-watch sex scenes that a lot of horror movies deem necessary. Of course, in this instance it is necessary (although it didn’t have to be so gratuitously long), as the whole premise of the movie is that things go badly wrong during a bizarre sexual practise called a ‘Donkey Punch’. If you’ve never heard of it, that’s a good thing, and I’m certainly not going to enlighten you! Suffice it to say, the participants on this occasion live to regret it….well, not all of them, alas; bad girl Lisa does not survive.
Panic stricken and desperate to save their skins, the boys decide to throw Lisa’s body into the ocean and pretend she had too much to drink and fell overboard. This meets with violent resistance from her friends, and so begins a night of mayhem and madness.
The soundtrack, although not to my taste, was appropriate; the haziness of the music in those stoned scenes really helped to display how the characters were feeling. This is one of several good qualities about this film; it’s a shame the story wasn’t one of them. Even though Donkey Punch is very well directed, and skilfully executed, with the added bonus of the claustrophobic surroundings of the yacht, the screenplay lacks any real originality. It was easy to guess everything that was going happen from start to finish, and in the absence of any shock factor, a movie of this genre is a lost cause.
All things considered, Donkey Punch was not worth an hour and a half of my life. In retrospect, I probably should have guessed that from the title!
DONKEY PUNCH (copyright 2008, released 2009). Directed by Oliver Blackburn. Written by Oliver Blackburn, David Bloom. Cast: Robert Boulter, Sian Breckin, Tom Burke, Nichola Burley, Julian Morris, Jay Taylor, Jaime Winstone.