The Christmas season is upon us, and as we have had occasion to mention, that means ghosts and spirits. And what greater Christmas ghost story is there than Charles Dickens’ A CHRISTMAS CAROL? That is the subject of this week’s Cinefantastique Round Table Podcast: Dan Persons, guest John W. Morehead (of Theofantastique.com), and Steve Biodrowski take a look back at the original novel and the numerous film and television adaptations, both live action and animated, that have brought not only Scrooge but also Jacob Marley and the Spirits of Christmas Past, Present, and Future to life on the screen. Listen for fond remembrances of everything from the 1951 classic SCROOGE starring Alistair Sim to the 1970 musical starring Albert Finney, from George C. Scott to Patrick Stewart, not to mention Mr. Magoo, the Muppets, and Doctor Who! 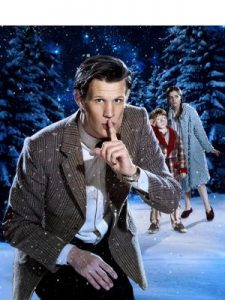 
This early sound adaptation of Charles Dickens’ immortal A Christmas Carol (1843) is slow in pace, static in execution, and sometimes shoddy in its productions values (or at least it looks that way in the run-down prints usually available – a recently restored version on DVD and VOD looks somewhat better). There are a few nice visual interpretations of the written text; otherwise, the film is of mostly historical interest, and only completists, film historians, and fans of the story are advised to seek it out.
There had been several short, silent versions of the story (including one with Seymour Hicks, who recreates his starring role here) and at least two feature length adaptation, including one directed by Rupert Julian, who went on to helm THE PHANTOM OF THE OPERA (1925) with Lon Chaney. The 1935 screenplay is reasonably faithful to Dickens, but it does takes a few liberties with the text that prefigure later adaptations. For example, a maid is added, rather pointlessly for the scene of Scrooge’s awakening on Christmas morning. Over fifteen years later, a similar addition would appear in SCROOGE (1951), starring Alistair Sim, but the scene between Ebenezer and the maid is handled much more memorable gusto and humor.
Other changes include a scene of Scrooge chasing carolers away from his business being replaced with a scene of him eating out and telling a waitress in a dusty apron to silence carolers outside. In the flashback of Scrooge losing his fiance, the tone is overwrought and melodramatic, unlike the book, which emphasized the young woman’s wistful disappointment that the man she loved has changed into a cold-hearted stranger; there is also an added scene of her at a later date, married and enjoying Christmas with her family. Finally, Scrooge himself is given Tiny Tim’s closing line: “God bless us, everyone!”
Cinematically, SCROOGE comes up short, although there are a few worthwhile touches. Some effective miniatures are used to depict air-born point of view as the Spirits whisk Ebenezer to different locations. The camera occasionally moves, but overall the action feels stage-bound, with actors filmed in profile as if through a proscenium arch.
For some reason, Scrooge’s visit to the past is shot like a flashback, glimpsed through a gauzy frame, rather than a trip through time; there is no interaction between the old Scrooge and the scenes of his younger self. This lack of interaction repeats in the future, when Scrooge is seen framed in his own shadow, watching the events but not walking among them. When Scrooge’s ultimate demise is revealed, the camera shows evil, cackling faces silhouetted in darkness as the charwoman sells items stolen from Scrooge’s deathbed – an interesting visual experiment that yields only awkward results. Later, when Scrooge struggles with the Spirit of Christmas Yet to Come, trying to rub out his name on the gravestone, we see only hand-shadows. The overall impression is of an awkward attempt at style, when a more straight-forward approach would have worked better.
SCROOGE also suffers from an overemphasis on background music to punch up the drama, along with some unnecessary songs. An early scene shows an assembled throng singing “God Save the Queen.” Later, Tiny Tim – who gives little visible evidence of chronic illness – sings, and our only reaction is “Oh brother!”
In the title role, Seymour Hicks offers an indifferent version of Scrooge who comes across more like a grumpy old neighbor yelling “Get off my lawn” than a symbol of greed depressing the human spirit. Perhaps the performance has simply not aged well: Hicks was apparently a success in the part on stage, but to modern eyes, he seems too much a one-dimensional cliche, without the subtle hints of loneliness or humanity that other actors would use to foreshadow the character’s eventual redemption.
The depictions of the Spirits of Christmas is eccentric. Christmas Past is a bright outline with a voice. Christmas present is a rotund beardless figure. The Ghost of Christmas Future is a shadow that Scrooge confronts in his bedroom, like the previous ghosts – but unlike the book and other film adaptations, which have him encounter the ominous spirit outdoors.
There are a few creepy moments. The atmosphere inside Scrooge’s dark house nicely sets up Marley’s “appearance,” which is foreshadowed by a nicely done ghost face on the knocker of the front door – the subtle disappearance suggests an optical illusion, making it easy to believe that Scrooge would shrug off this first supernatural manifestation. Curiously, when Marley does arrive for his chat with Scrooge, he is entirely invisible, his presence revealed only by objects that appear to be moving themselves and by his voice – which in a further irony, resembles that of Claude Rains, who starred as THE INVISIBLE MAN (1933) two years earlier.

The 1935 SCROOGE has long been available only in a severely truncated form, with large chunks of the story cut out, such as flashbacks of Scrooge’s sister and Scrooge’s acid-tongue comment to a charity collector about descreasing “the surpluss population. The later is a particularly glaring omission, considering that this cut retains the later scene wherein the Ghost of Christmas Present disparagingly quotes Scrooge’s words back to him!
Care should be exercised when renting or purchasing the film on DVD.  Discs tend to list the complete 78-minute running time, whether or not the print contained is in fact complete.


A good example is the dollar-discount disc from EastWestDVD.com, which lists the 78-minute running time even though the actual length is closer to one hour. The print is watchable but speckled and soft. The presentation is barebones, without trailers or even a scene selection menu; the transfer has been chaptered-stopped; you just have to go through it one step at a time to reach the desired scene.
However, it is not quite right to say there are no bonus features; the disc contains one surprise that seems like an accident. After SCROOGE fades out, there is another Christmas title: a 1955 television version of THE MIRACLE ON 34TH STREET, made for the 20TH CENTURY FOX HOUR and starring Macdonald Carey, Hans Conreid, and Thomas Mitchell as Kris Kringle. The title is not listed on the disc’s cover art, nor is is accessible through the DVD menu; you simply have to wait for SCROOGE to end (or advance through all the chapter-stops). It is as if EastWest ran off a bunch of discs with both films on them and labeled some SCROOGE and some THE MIRACLE ON 24TH STREET.
Another eccentricity of the East West disc is that the cover bills it as a “John Brahm Film” even though it was directed by Henry Edwards. This is an apparent attempt to earn some cache by associating the film with production supervisor Brahm, who went on to direct a few wonderful thrillers in the 1940s: THE UNDYING MONSTER (1942), THE LODGER (1944), and HANGOVER SQUARE (1945)

A colorized version of SCROOGE is available from Legend Films (a company that specializes in such releases). The Legend DVD also contains a transfer of the film in it soriginal black-and-white. Although billed as “beautifully restored,” the running time is listed as 60 minutes. The B&W print looks sharper and cleaner than the East West transfer (the speckling and scratches have been erased), but the image registration is still a little wobbly, and dimly lit scenes look a bit washed out. This black-and-white version is available for rental through our Video on Demand service (powered by Amazon.com).
Whichever version you see – on television, DVD, or VOD – you would be well advised to lower your expectations. Although Legend Films’s product description claims that SCROOGE is “considered the best adaptation of A Christmas Carol ever made,” they do not specify who considers it so, and it is difficult to imagine many viewers who would agree, in light of the many entertaining adaptations that have followed.
If you are afraid of wasting your money on the rental of the incomplete version, you can see the complete cut of SCROOGE on YouTube here, with a different opening credits sequence.
SCROOGE (1935). Directed by Henry Edwards. Screenplay by H. Fowler Mear, based on A Christmas Carol by Charles Dickens. Cast: Seymour Hicks, Donald Calthrop, Robert Cochran, Mary Glynne, Garry Marsh Oscar Asche, Marie Ney, C.V. France, Athene Seyler, Barbara Everest, Philip Frost.
[serialposts]