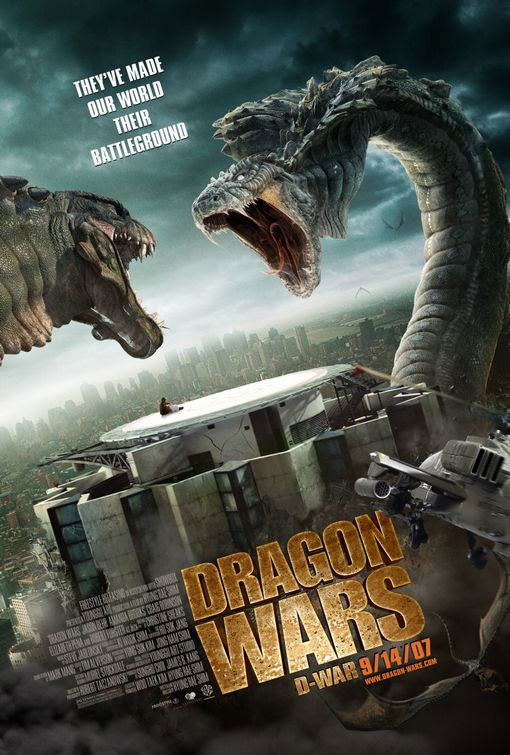 A movie does not have to be good to be entertaining. If there were any doubt about the truth of this axiom, along comes DRAGON WARS (subtitled D-WAR on screen), offering up conclusive proof. By no reasonable reckoning can the film be considered a competent piece of cinematic storytelling, yet somehow the movie transcends its silly screenplay with over-the-top action and visually imaginative battles that are good enough to qualify as mindless fun. The result is not high camp in the so-bad-it’s-funny mold of MIGHTY PEKING MAN; this is really more an example of a low-ambition popcorn movie with enough good sequences to compensate for the unintentional laughter.

DRAGON WARS quick-starts with a nice aerial view of a devastated area – the first evidence of dragon activity in a modern day metropolis. The sight of a large reptilian scale leads our hero Ethan (Jason Behr) into an abrupt childhood flashback, when an antique dealer named Jack (Robert Forster) conveniently told him (and by extension the audience) everything necessary to make sense of the plot. This clunky exposition feels like receiving a condensed crash course in Eastern mythology, and you will quickly lose track of the various oddly named entities, whose cosmology seems at least as complex as the choirs of angels in Zoroastrianism (let’s see: cherubim, seraphim, etc.).


Although the young Ethan is clearly perplexed by this deluge of information, Jack never bothers to render it in terms that might be understandable to a boy born in the 20th Century. What it boils down to is this: There is a magical power that will turn a great and worthy serpent into a heavenly dragon, but there is an evil serpent that wants to steal this power. Heaven has hidden this power in a human woman and sent two guardians to protect her (Jack and Ethan), but there is also a marauding army in the service of the evil serpent.
Ethan’s childhood flashback flashes back a further five hundred years to show all of this back story played out in Korea. This sequence captures a beautiful sense of colorful Fant-Asia sword-and-sorcery, a la A CHINESE GHOST STORY, and for awhile it seems as if DRAGON WARS may actually turn out to be good. But then the evil army attacks the peaceful village, and the first major stupid plot points emerges: the two good guys have had twenty years to prepare for this, but when the crisis hits, they seem to be out to lunch, offering little defense until after the village has been thoroughly ravaged. (Why the forces of Good have only two heroes, while the Evil side can muster an entire army, is a question that goes unanswered throughout.) 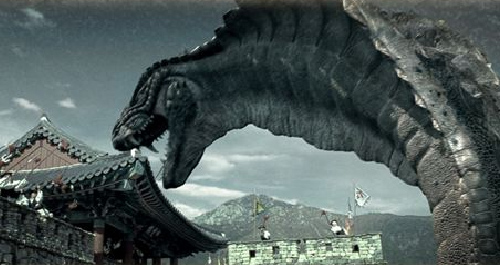 Five hundred years later, the events play out again, with the three principal characters having been reincarnated in Los Angeles. Strangely, the two guardians have not learned the lesson of the past; even after five centuries, they are still no better prepared for the attack they know is coming. There seems to be no plan, and the action consists mostly of trying to outrun the threat.
Unfortunately, this approach leads DRAGON WARS straight into one of the worst cliches of cinema: we’re supposed to identify with the lead characters and care what happens to them, but everybody else can just fend for themselves. After Ethan tracks down Sarah (Amanda Brooks), the two of them lead the evil serpent on a merry chase through the streets of Los Angeles, stopping at various houses, restaurants, and office buildings, all of which are promptly destroyed. Yet the couple never for a moment shows any sense of guilt or regret about exposing untold innocent by-standers to the danger that is following them.
We in the audience are not supposed to care about this; we are supposed to sit back and simply enjoy the ride. The movie itself feels little concern about barreling ahead at full-speed regardless of logic. This has some benefits. There is an obligatory scene of a zookeeper put in a straitjacket after describing a giant serpent eating the elephants (you would think the zoo could at lest confirm that the elephants were missing), but the authorities quickly – if not very convincingly – realize the truth of the situation, sparing us the usual “there must be some other explanation” dialogue. Unfortunately, the gambit goes too far, with Anglo FBI officers suddenly up to speed on ancient Korean mythology – there must be a folder on it buried in the X-Files somewhere.
Movies can overcome credibility problems if they offer their audience some sort of emotional bond that will convince them to overlook leaps in logic, but even in that regard DRAGON WARS falls short. Actors Behr and Brooks are given absolutely zero to work with in terms of characterization: there is not a single distinguishing trait between the two of them; they play archetypal romantic leads, who fall in love because the script tells them to, not because there is any chemistry between them. On top of this, Behr’s Nathan is exceedingly lacking as a hero. He does little useful, nothing clever; his one achievement (taking a bullet aimed at Sarah) is undermined when – laughably – he simply stands up immediately afterward and says he’s okay, then resumes the action as if nothing had happened.
In the Merlin role, Forster comes across like a more tangible version of the ghostly Ob-Wan Kenobi. After the early flashback, he pops up at convenient moments to lend assistance, but it is never clear why he does not stick around instead of disappearing like the Lone Ranger without waiting for a thank you (a tactic that elicits laughter in at least one case, when he lurches abruptly off-camera after beating up three guys who were harassing Sarah). There is just barely a hint that the leader of the evil army may have killed Jack, which would explain why he appears and disappears like a ghost; perhaps this is one of the seventeen minutes of footage that was deleted since the 107-minute version screened at the American Film Market last November.
With all this against it, what does DRAGON WARS have to offer? It allows Korean writer-director Hyung-rae Shim to take on Los Angeles like a kid trampling a toy train set. The perennial popularity of disaster flicks and giant monster movies suggests there is a vicarious joy in depicting large-scale destruction on screen, and DRAGON WARS delivers the goods. Regardless of the story deficiencies, the film works on a visual level, thanks to the startling sight of ancient, mythical monsters let loose upon a modern metropolis. 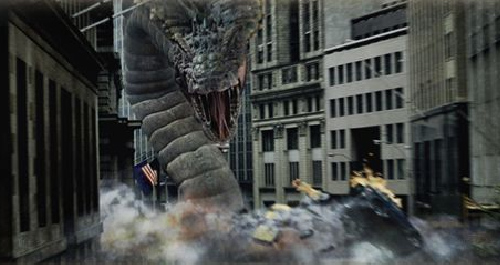 All of the genuine imagination went into this aspect of  DRAGON WARS, resulting in some memorable set pieces, such as the serpent’s attack on the U.S. Bank Building – the tallest structure in downtown L.A. Not only does the creature pull a civilian helicopter out of the sky (during a lift-off from the landing pad atop the building); the beast also ends up in the target sights of half a dozen military copters – an expertly choreographed sequence that ranks with the best monster movie action ever filmed. Impressively, the scene never degenerates into a circular firing squad; the choppers believably target the moving serpent while avoiding each other, and the computer-effects footage is brilliantly punctuated with live-action shots of Behr and Brooks huddling beneath the rain of spent shells tumbling down from the sky all around them.
This sequence is just a prologue for the epic battle that follows on the streets of the city below, featuring high-tech modern military equipment clashing with an ancient army of armored warriors mounted on reptilian monsters. The special effects may not be totally convincing, but the juxtaposition of anachronistic imagery sells the sequence spectacularly. And in all fairness, the CGI is no more cartoony-looking than that in most American blockbusters, and the action is at least as well staged as anything in this summer’s TRANSFORMERS.
A sequence like this is hard to top, but DRAGON WARS manages the feat. With the connivance of the useless Ethan (who gets knocked unconscious while trying to drive Sarah to safety), the screenplay gets our heroes into the villains’ lair for the climax, a scene that seems equal parts KING KONG and RAIDERS OF THE LOST ARK. Sarah is tied to an altar, to be sacrificed to the serpent god, but a magic amulet finally sparks to life and zaps a bunch of the bad guys. Finally, the Good Serpent (about whom we have heard so much) makes a belated entry to battle his dark counterpart, and the film leaps to a whole new level of outrageous action when the creature absorbs the magic power that transmogrifies it into a Heavenly Dragon. The snake-like, animalistic appearance is replaced by horns and whiskers suggesting ancient Asian dragons, and the body movement takes on an entirely different characteristic: no longer a belly-crawling serpent, this dragon floats majestically on air.
Of course, the outcome of the confrontation is a foregone conclusion, but these clever visual touches make the scene enchanting as well as thrilling, and there is even a touch of pathos at the end. Against all odds, Behr’s final close-up manages to generate a genuine, emotional response; for at least a moment, you will forget the incredible story and buy into the character. This is as close as the human element ever comes to matching the special effects; it is not enough to redeem the shabby dramaturgy of the rest of the film, but it does send the audience away on a good note. In the end, you must be willing to forgive many egregious flaws in order to enjoy DRAGON WARS, but for sci-fi fans who make the sacrifice, the rewards are worth it.

Although a South Korean production, D-WAR (as it was known in its native land) was shot largely in Los Angeles with an American cast. The budge is rumored to be in excess of $75-million, which includes money spent on developing the facilities necessary to produce the elaborate, computer-generated effects in Korea.
Although many reptilian beasts appear in the film, one could argue that only one qualifies as a true dragon – the one that undergoes the metamorphosis at the end.
DRAGON WARS: D-WAR (a.k.a. “D-War,” 2007). Written and directed by Hung-rae Shim. Cast: Jason Behr, Amanda Brooks, Robert Forster, Aimee Garcia, Craig Robinson, Chris Mulkey, John Ales, Elizabeth Pena, Billy Gardell, Holmes Osborne