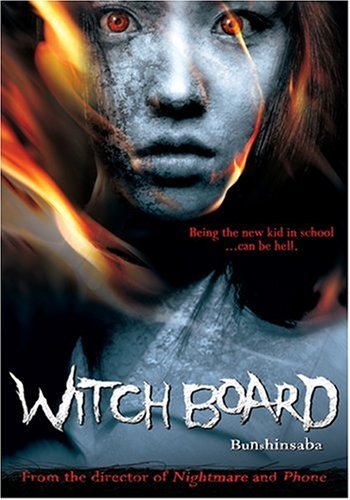 Despite some effective scare scenes WITCH BOARD: BUNSHISABA is a disappointing horror film from South Korean writer-director Byeong-ki Ahn, whose PHONE is one of the best of the Asian ghost movies to follow in the wake of RING. All the familiar elements are back in place (the dark-haired ghost girl, the girls-school setting, etc), and Ahn manipulates them as well as ever, but his scenario is a jumbled mess that doesn’t come close to holding together as a coherent movie. By the time the ending wraps up, even the most patient fan of Asian horror films may become fed up with the haphazard plotting.
WITCH BOARD: BUNSHISABA begins with some victimized school girls putting a curse on their tormentors, who begin bursting into flames, but this plot thread is soon resolved as the perpetrators are identified. Is the movie already over, after only a half-hour? No, Byeong-ki Ahn keeps the story going by telling us that the curse was carried about by a vengeful ghost girl. Apparently, she was obliging enough to follow orders and kill the bullies, but she also has her own agenda – and a good thing, too, otherwise it would be hard to stretch the film to feature length. As usual, there is a back story about the ghost, and some of the adult characters are hiding an evil secret about her demise. As if that were not enough the ghost girl (surprise, surprise) wants to be reborn in the flesh – just like Kayako in JU-ON: THE GRUDGE 2.
WITCH BOARD: BUNSHINSABA is so derivative that it feels like the work of a hack, shamelessly ripping off other movies. Of course, Byeong-ki Ahn has never been noted for his originality, and his previous screenplays feel as if he cherry-picked favorite elements from other horror films. At least in PHONE, he managed to synthesize these fragments into a coherent murder-mystery-drama in which the horror scenes acted as visceral punctuation marks.
Sadly, WITCH BOARD: BUNSHISABA is a throwback to Byeong-ki Ahn’s earlier effort NIGHTMARE, which (though entertaining) felt like two different movies spliced together (a psycho-thriller a la Brian DePalma or Dario Argento combined an Asian ghost story). At least the splicing pretended to serve a function there (the audience is supposed to guess whether the gruesome murders are committed by a ghost or by a lunatic). WITCH BOARD: BUNSHINSABA is even worse: it feels like three or four different movies spliced together, with no rhyme or reason at all to justify the combination. You get the feeling that every idea Ahn had while working the on script found its way onto the screen, whether it fit in or not.
Ahn still has a decent grasp of the mechanics of fear, but with an incoherent story that goes nowhere, the scare scenes wear themselves out through endless repetition, creating a film that feels almost interminable. Fortunately, there are a few nice touches to remind us that the man does have some talent, but it is on better display in PHONE.
Before WITCH BOARD: BUNSHINSABA, Byeong-ki Ahn seemed poised to become a major force in the horror genre – the Korean equivalent of Takashi Shimizu. As a debut film, NIGHTMARE was flawed but entertaining, displaying exciting potential – potential that was more full realized in his follow-up, PHONE. Unfortunately, instead of hitting his stride, he stumbled badly with WITCH BOARD, but reaction to APT (Apateu, 2006) indicates he bounced back. Next up for him is the obligatory, unnecessary American remake of PHONE, though the extent of his involvement (if any) is unclear at this point.

The Korean title “Bunshinsaba” is more or less the equivalent of “abacadabra” – a magic word meant to invoke spirits. English-subtitled prints seen at festival screenings in the U.S. rendered the title as “Ouija Board” although there is no Ouija Board on screen.