Liddle Entertainment and Roadside Attractions team up to provide a limited  theatrical run to this Spanish production, starring Javier Bardem as Uxbal, a “dour man but a devoted husband and father who, thanks to his ability to read the minds of the recently deceased, ekes out a living in Barcelona.” Reaction at festival screenings (Cannes, Telluride, Toronto) was not overwhelming, but Badem earned good notices. The genre element is small, so don’t expect to see a scary movie about someone who sees dead people.
Release Date: January 28
BIUTIFUL received an exclusive, Oscar-qualifying run in New York and Los Angeles, starting on December 29.
Official Website: Click here

Alejandro Gonzalez Iñárritu has been one of those directors who has slowly gained a larger following in recent years. His most recognizable works amongst the mainstream audience would be AMORES PERROS, 21 GRAMS, and BABEL, all movies about certain aspects of the human condition interwoven with gorgeous cinematography. After seeing the trailer for his next movie, BIUTIFUL, it doesn’t appear like that trend will be stopping anytime soon.
BIUTIFUL revolves around a Barcelona man, played by Javier Bardem (NO COUNTRY FOR OLD MEN), who makes a living anyway he can, usually involving the providing of cheap labor to sweatshops and managing the sale of black market goods. 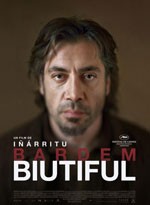 While either of those are stressful enough, he is also providing for his mentally ill wife and two children. During the course of the film, Bardem’s character learns that he has terminal cancer, a fact revealed through visions of ghosts of those he has indirectly harmed in his bid for money.
Not your typical “Ghost Story” but one worthy of a look through. BIUTIFUL is currently making it’s way through the festival circuit with fans hoping for a wide-release in the coming months.