The film BEOWULF has become the object of differing interpretations as to how depicts paganism in relation to Christianity. I recently reviewed the film in order to address these differing perspectives. Below is an excerpt of the resulting article that I posted at TheoFantastique:

I searched the Internet yesterday to familiarize myself with Christian interpretations BEOWULF and I found two views at opposite ends of the interpretive spectrum. On the one hand Christianity Today magazine included a review of the film that was very positive, so much so that it makes the claim that, “Screenwriters Gaiman and Avery have actually taken the spiritual imagery even further, heightening Christianity’s clash with the pagan Norse religions and orienting a plot that is shot through with biblical imagery.” The review goes further and states that “the animators’ inspiration was simple—a six-foot-six, incredibly muscular, Norse Jesus Christ.” On the other end of the spectrum National Review Online posted commentary with the title “Anti-Christian Crusade,” and the subtitle “Beowulf the latest installment in Hollywood’s attempt to reconfigure history.” With these radically different interpretations in mind as the film relates or doesn’t relate to Christianity, what are we to think of this artistically and technically beautiful piece of cinema that takes realistic computer generated animation to a new level?
The film, like the ancient folk epic upon which it is based, reflects a sixth century A.D. Anglo-Saxon culture, including the paganism of the time. In my viewing the film only included three direct references to Christianity, including two specific references and one general reference from the Judeo-Christian tradition. The first direct reference comes in the form of a question near the beginning where a query was made of the king which he dismissed as to whether sacrifices should be made not only to the Norse gods of paganism but also the “new Roman god Christ Jesus.” The second reference comes toward the end of the film where Beowulf as king laments the loss of the time of heroes, battles, and monsters. In Beowulf’s view the “Christ god has killed it leaving humankind with nothing but weeping martyrs…” The general reference to the Judeo-Christian tradition comes with a reference to the “sins of the fathers,” an allusion to an Old Testament passage which refers to the sins committed by the fathers visiting their children if they are not addressed properly by the fathers themselves.
With these three references to Christianity, which of the two interpretations of the film’s treatment of Christianity seem most accurate? The positive assessment, or the negative one? I’d like to argue that neither does justice and that another view is in order. Taken in the historical and cultural context of the story itself, the remarks made by the characters in relation to Christianity make perfect sense and seem to be a natural way in which sixth century Norse pagans, steeped in heroes, monsters, and battles, and deities that engaged in such eploits, would have reacted to Christianity and its offer of a new, suffering god and way of life advocating pacifism. Taken in context the remarks seem quite natural to the story and do not seem to reflect anti-Christian bias. On the other hand, in my view it is also a great stretch to see the film as inclusive of biblical imagery, and there surely is no support for the notion that Beowulf is modeled after a “Norse Jesus Christ.” The latter claim is reminiscent of Christopher Deacy’s concern over the frequet and inappropriate appropriation of Christ-figures in films where they do not exist. The reason for these differing interpretations is clear. If film viewers interpret the film in light of their presuppositions about Christianity and popular culture, then these presuppositions will result in the divergent interpretations we see represented by Christians along an interpretive spectrum.
Read the complete post at TheoFantastique. 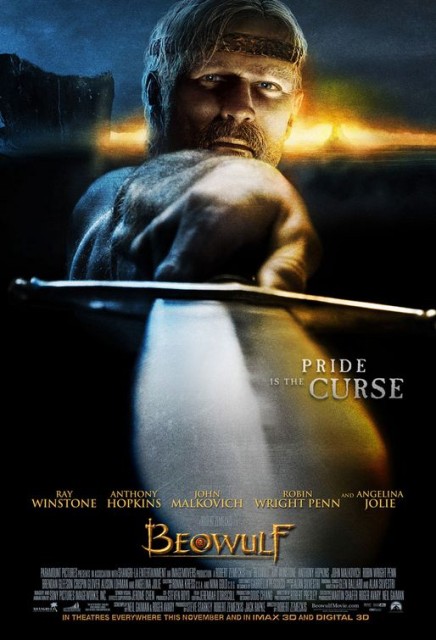 This retelling of the epic poem about a monster-slaying hero unites computer-generated imagery with live-action performances through the magic of motion-capture. Unfortunately, the marriage breeds a bizarre hybrid, as strange (if not quite as ghastly) as the half-human, half-demon Grendel that haunts the first act. Like that hideous monster, BEOWULF is an almost inexplicable mutant mishap,  as if the genetic synthesis combined – and somehow magnified – the worst rather than the best of both parents. The background designs are beautiful; the creatures are imaginatively conceived; the human characters are rendered in fine detail and enacted with spirited performances. And yet, the result is artificial and unconvincing, with all the life of a perfectly preserved corpse manipulated by marionette strings: no matter how deft the performer, no matter how elaborate the movments, what we are watching looks dead.
END_OF_DOCUMENT_TOKEN_TO_BE_REPLACED

Hey, watch where you’re pointing that sword, buddy!
You better duck, because BEOWULF is comin’ at ya in 3D. The Hollywood Reporter has an article on the growing interest in 3D exhibition of movies. 3D has had a couple of cycles of interest, first in the early 1950s, then again in the early 1980s, but thanks to advances in digital technology, this time it may be more than a fad:

“Exhibitors are more likely to do a digital install right now for movies like ‘Tim Burton’s The Nightmare Before Christmas’ or ‘Beowulf’ or any of the other announced product because they can have these blend into the deals that will be brought into the marketplace by DCIP,” Viane explained.With “Nightmare” and “Beowulf” slated for release this fall, it is expected that there will be roughly 1,000 3-D-ready digital theaters and a total of 4,000 digital cinema screens, representing 10% of the domestic market by year’s end. “By the end of next year, I would think you will be at 25%,” Viane said. “I think DCIP will really determine how quickly the tipping point comes. But the end of next year we could be at 60%. That would not shock me at all.”Katzenberg’s benchmark is the March 27, 2009, the release date for “Monsters vs. Aliens,” DreamWorks Animation’s first 3-D feature. “We need 6,000 (3-D-equipped) screens by March 27, 2009,” he said. “That’s the thing that I am most anxious about. It’s a tremendous opportunity for exhibitors. Exhibition will be able to get a meaningful premium for their 3-D experience. When we release one of our PG titles, we are in the 7,500-8,000 screen range. I’d like to see three-quarters of those be equipped with 3-D by 2009.”

Although the Reporter article does not address the issue specifically, high-quality 3D exhibition is seen as one way to get audiences away from their home entertainment and back into theatres. For example, NIGHTMARE BEFORE CHRISTMAS, which was shot in standard two-dimensional stop-motion, was re-released last year with a digital 3D upgrade, grossing $8.7-million – not bad for a movie over a decade old, that is available on VHS, laserdisc, and DVD.