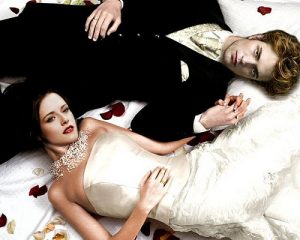 Well…the header really kind of says it all now doesn’t it?
In an interview with Popsugar.com, Melissa Rosenberg, screenwriter of the TWILIGHT series, seems to confirm that the famous (or infamous depending on how much you enjoy the books) birth of Bella and Edward’s baby will make it to the film version of the final installment THE TWILIGHT SAGA: BREAKING DAWN.

Many would agree that sinking one’s teeth into placenta is difficult to imply but if anyone can do it, most likely its a sparklingly broody Robert Pattinson. Let’s just hope that there are buckets of Tic-Tacs on stand-by.
[serialposts]