Sooner or later, it had to happen. Three months into 2014, we finally move beyond the execrable and the mediocre, to something imaginative, exciting, and just flat-out worthy of praise. NOAH allows director Darren Arnofosky to apply his characteristically iconoclastic vision to the classic Bible tale, transforming the historic setting into a fantastic world where fallen angels walk the earth in the form of lumbering rock monsters, technology has advanced enough for bear traps and projectile weapons, and the humble, pious man charged with ferrying the world’s beasts and birds safely through the watery manifestation of the Lord’s wrath becomes, courtesy of Russell Crowe’s performance and Aranofsky’s incisive read of the material, a conflicted hero tasked with determining how much of God’s judgement the Creator expects him to fulfill by his own hand.
Theofantastique.com’s John W. Morehead joins Spotlight regulars Steve Biodrowski, Lawrence French and Dan Persons as they discuss Aranofsky’s visionary approach to the story, explore what the film has to say about the nature and demands of faith, and look into the political controversies the film has stirred up. Click on the player to hear the show.

Is this the most convenient superhero movie ever?

Thor: The Dark World is not the worst superhero movie ever made, but it may be the most convenient. How convenient is it? Well, let us enumerate:

Is THOR: THE DARK WORLD entertaining enough to make you suspend disbelief and overlook this convenience? Well, it ups the ante on the de rigueur superhero plot: the film is about the end of not only this world but the entire universe. Pretty exciting, huh?
Well, no. Not unless you think the sight of a long-haired blonde guy swinging a slightly ridiculous hammer is exciting. Helmsworth is an engaging on-screen presence, but Thor is a bit of a second-rate superhero. He underwent his entire character arc in THOR (from irresponsible lout to noble warrior), which leaves little left for the actor to do with the character this time, except express some mixed feelings about ascending to his father’s throne. (Because swinging a hammer on the battlefield is suitable for a superhero; sitting on a throne is not.)
But wait, there is depth of character in this movie. For instance, Thor’s sneering brother Loki (Tom Hiddleston) is not only sardonic, smug, and sinister; he is also very annoying. Selvig isn’t just smart; he’s crazy (apparently the aftereffect of his encounter with Loki in THE AVENGERS, but really just to give Stellan Skarsgard something to play). And Jane is not just beautiful but…well, smart – we know this, because she can spin that dial on the Radio Shack device.
And not only is their depth; there is also comic relief, thanks to the quirky supporting characters. The question: What does “comic relief” mean? Is it:

If you picked Answer #2, you probably just got through watching THOR: THE DARK WORLD.
The film’s few good moments revolve around the relatively low-key family drama. The plot contrives to get Thor and Loki working side-by-side after (SPOILER) their mother (Rene Russo) is killed, fueling their mutual desire for revenge. (END SPOILER). Lokis’s shtick is getting a bit worn-out by now, but his scenes with Thor actually generate some interest, as Thor admits he wishes he could trust his brother, and Loki responds, “Trust my rage.” The script carefully avoids going too far with the reconciliation, finding just the right note and bringing the narrative thread to a satisfying conclusion.
Which turns out to be a problem, because the film is not over at that point and must continue with that whole universe-in-peril thing, even after our interest in the character interaction has been satisfied. With no drama left to fuel the film, THOR: THE DARK WORLD relies on rote spectacle – which is not quite spectacular enough to sustain the movie all on its own (though the aether effects are pretty cool).
If you manage to sit all the way through the end, you will be treated to two of the worst “yes, there will be a sequel” moments in recent memory. The first is a simple “surprise” twist in which (SPOILERS) Loki turns out not to be dead, having someone replaced Odin (Anthony Hopkins) on the throne (which come to think of it, is extremely convenient, but let that pass).
The second is one of the Marvel Comic Book movies traditional post-credits (or in this case, mid-credits) sequences, in which two of Thor’s friends place the aether in the hands of a character named The Collector (a slightly over-the-top Bencio Del Toro). Now, if I were a Marvel Comics fan, I’m sure I would know who The Collector is, but you know what? I’m not, but it doesn’t matter, because I know exactly everything I need to know about the Collector, and so will you when you see the movie, which is two things:

Loki makes occasional comments about Thor’s lack of intelligence. If Thor okayed this plan, then Loki certainly seems to be right. (END SPOILERS)
Whatever its flaws, I don’t to give the impression that THOR: THE DARK WORLD is an absolute disaster. It’s not egregiously stupid; it’s simply dull. It’s loaded with special effects and action, but it’s all rather lifeless. The end-of-the-universe scenario never builds up any suspense, and Eccleston, though he strikes a menacing figure as Maleki is never given enough to do to create the towering portrait of evil that would dramatically energize Thor’s quest to defeat him. But at least the Thor-Loki narrative thread is worth unwinding. Too bad it’s twisted up with all the overblown blockbuster nonsense. At least it’s mildly intriguing to note that THOR: THE DARK WORLD is a superhero movie in which the superheroics are the least interesting element. The character interaction outshines the effects. If only the filmmakers had realized where the film’s true strength was…
Update: By the way, I forgot to mention that THOR: THE DARK WORLD is in 3D. Draw your own conclusions.


Most Mother’s Days, loving children show their gratitude with flowers and breakfast in bed. This Mother’s Day, the kids had the option of taking Mom to the multiplex, where she could drool over the handsomely chiseled Thor in the newest, big-screen adventure out of the Marvel stable. Is THOR — directed by Kenneth Branagh, starring Chris Hemsworth as the mighty-thewed (thewed?) God of Thunder,  Natalie Portman as his potential love-interest, and Anthony Hopkins as Big Daddy Odin, with a special guest appearance by Gort’s younger, more ambitious brother — the film that will bring a Shakespearean gravitas to comic book drama, or is it just so much table setting for the impending THE AVENGERS movie? Join The Chronic Rift’s John Drew and Cinefantastique Online’s Dan Persons as they discuss the movie behind the myth.

The Cinefantastique Spotlight Podcast goes to Hell in a handbasket this week, as Dan Persons, Lawrence French, and Steve Biodrowski scourge the evil spirits possessing THE RITE, the new exorcism-themed horror film starring Oscar-winner Anthony Hopkins (THE SILENCE OF THE LAMBS). Allegedly inspired by true events, the screenplay by Michael Petroni (suggested by Matt Baglio’s book) has skeptical seminary student Michael Kovak (Colin O’Donoghue) reluctantly attending exorcism school at the Vatican, where he meets expert exorcist Father Lucas (Hopkins), who tries to convince him of the reality of the Devil. Mikael Hafstrom (1408) directed. Alice Braga, Ciaran Hinds, Rutger Hauer, and Franco Nero co-star.
Is this THE EXORCIST for the 21st Century, or is it just warmed over pea soup? Come along and find out.


All kinds of news prompt all kinds of discussion from this week’s panel: the rumored casting of Anthony Hopkins as Alfred Hitchcock in a film about the making of PSYCHO gets theofantastique.com‘s John W. Morehead, CFQ’s Steve Biodrowski, and Dan Persons musing about what behind-the-scenes events could be dramatized in a film that aren’t already well-known; while elsewhere there’s a debate about the relative quality of THE LITTLE MERMAID as compared to BEAUTY AND THE BEAST. Plus, John gives his impression of the Science Fiction episode of PIONEERS OF TELEVISION; Steve gives a rundown of ROSENCRANTZ AND GUILDENSTERN ARE UNDEAD; while Dan unleashes his animeniac on DURARARA!! and SUMMER WARS.

The Marvel movie pics keep coming, as seen in this new shot of Chris Hemsworth as THOR from Entertainment Weekly.
THOR, directed byKenneth Branagh,  is set to be released   May 6 th, 2011 in 2-D and 3-D.

Warner Brothers (the studio behind THE EXORCIST) releases this supernatural thriller through its New Line subsidiary. Allegedly inspired by true events, the plot follows skeptical seminary student Michael Kovak (Colin O’Donoghue), who reluctantly attends exorcism school at the Vatican. While in Rome, he meets an unorthodox priest, Father Lucas (Anthony Hopkins), who introduces him to the darker side of his faith. Directed by Mikael Hafstroem (“1408″), “The Rite” is a supernatural thriller that uncovers the devil’s reach to even one of the holiest places on Earth. Mikael Hafstrom (1408) directs from a screenplay by Michael Petroni, suggested by Matt Baglio’s book. Alice Braga, Ciaran Hinds, Rutger Hauer, and Franco Nero co-star.
Release Date: January 28
[serialposts]

Here’s the first Official trailer for THOR, if you haven’t seen it elsewhere already.

“Directed by Kenneth Branagh, the epic adventure THOR spans the Marvel Universe from present day Earth to the realm of Asgard.
At the center of the story is The Mighty Thor, a powerful but arrogant warrior whose reckless actions reignite an ancient war. Thor is cast down to Earth and forced to live among humans as punishment.
Once here, Thor learns what it takes to be a true hero when the most dangerous villain of his world sends the darkest forces of Asgard to invade Earth. 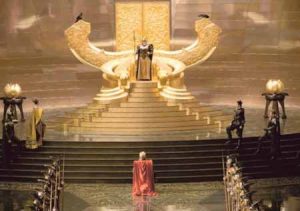