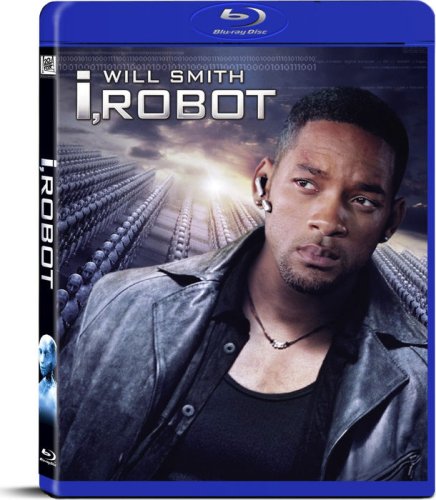 Director Alex Proyas created one of the great works of modern science fiction cinema with Dark DARK CITY in 1998. Alas, this follow-up, while entertaining on a few levels, is no match for that earlier masterpiece. Instead, it feels like an anonymous Hollywood studio film that overwhelmed the director with the demands to fashion a blockbuster vehicle for its star. The result is a technically polished piece of summer-style entertainment tha stumbles over its attempts to insert a message that will resonate with a wide cross-section of viewers. The ambition is admirable but ultimately underlines the film’s light-weight nature, which cannot  support any heavy philosophizing. Inspired by the robot stories of Isaac Asimov, I, ROBOT follows a police detective (Will Smith) convinced that robots are capable of crimes, including murder, even though Isaac Asimov’s famous Three Laws of Robotics (which include not harming a human) seem to prohibit this. As simple summer entertainment, the story is interesting; some of the action is exciting; and there are even a few halfway decent ideas on hand.

Unfortunately, the film succumbs to CGI-excess. The computer-generated robots look phony, especially when they finally go on the attack, and the scenes of robot-vs-robot fighting are totally involving. On a story level, we’re disinterested because they are machines, not human beings who can feel pain; on a visual level, we can see that all the action is being rendered with computer animation—the obvious artificiality destroys any visceral impact. It only makes things worse that the computer-generated imagery is presented as if it is the most awe-inspring visual feast ever, including slo-mo action a la THE MATRIX that will have you yearning for the good, old-fashioned wire work and martial arts of Hong Kong fantasy flicks.


Will Smith and James Cromwell give good performances, but Smith is somewhat hampered by the obvious narrative devices: his character distrusts and hates robots, so you can bet he will learn to trust and love them by the end. The idea, apparently, is for the mechanical men to symbolize the plight of slaves, with Smith as the human who is deeply but unfairly prejudiced against them (the casting of a black actor intended as an obvious piece of irony).
It’s a rather precious conceit that offers the semblance of profundity without really saying anything: it’s hard to see a direct parallel between African-Americans (real human beings whose ancestors were treated as animals) and robots (mechanical men who are treated as…well, mechanical men). Probably much of the blame goes to co-writer Akiva Goldsman, who used to churn screenplays for junk like LOST IN SPACE before inexplicably being anointed with an Oscar for A BEAUTIFUL MIND. (Goldsman went on to contribute a bad ending to another Smith sci-fi tale, I AM LEGEND.) The film pats itself on the back for introducing this dubious idea as if it were a profound insight. If the parallel – or, more accurately, the lack of parallel – could have been explored in more depth, then perhaps the film would have been onto something; as it stands, it might have been better to stick to being a summer popcorn movie.

The All-Access DVD is loaded with special features, including three audio commentary: one from Alex Proyas and Akiva Goldsman; one about the visual effects featuring production designer Patrick Tatopoulos; and one featuring composer Marco Beltrami. The second disc includes the bulk of the bonus material. “Day Out of Days: The I, ROBOT Production Diaries” is a multi-part series of behind-the-scene vignettes about shooting the film on set and location, including a surprising interview with a stunt driver (surprising, because, judging from the film, one would suspect that all that sort of action was created in the computer). Another lengthy feature is “CGI and Design,” which focuses on the computer-generated contributions to the movie, which supplied not only the robots but also much of the environment. Also included are two alternate endings.
20th Century Fox’s Blu-ray disc  of I, ROBOT (releated on March 11, 2008) features English DTS-HD master Audio 5.1, French Dolby Digital 5.1, and Spanish Dolby Digital 5.1 Sound, along with subtitles in English, Spanish, Chinese, and Korean. Of course the picture transfer offers all the clarity you’ve come to expect from the high-resolution format.
The supplemental features, many of them carried over from the two-disc DVD, are accessbile only through the Blu-ray player’s remote buttons: red, blue, green, and yellow. These include
Red Button – Behind the Camera

Cage will play a teacher who examines the contents of a time capsule unearthed at his son’s elementary school. Startling predictions in the time capsule that have already come true lead him to believe the world is going to end at the close of the week and that he and his son are somehow involved in the destruction.
[…]
Escape Artists originated the project with novelist Ryne Pearson, who pitched it and wrote the first draft. “Knowing” has been rewritten by Stiles White and Juliet Snowden; Proyas and Stuart Hazeldine did the most recent draft.