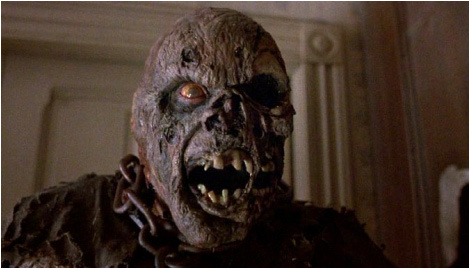 Hardly dull but not necessarily good.

This is a typically outrageous, action-packed flick from Hong Kong, in which characterization and coherence play second fiddle to throwing anything up on the screen that comes into the writer’s mind. With so much going on, the film is hardly ever dull, but that does not necessarily mean it is good. The violence and gore safely pushes the story into horror film territory, but the whole thing is too silly to take seriously, so no real thrills emerge. The cast of characters is rather generic, and the obligatory twist ending is so perfunctory it barely has any impact at all.

The film begins with a construction site where some kind of burial tomb is accidentally unearthed, unleashing a mysterious form of energy. A flashback reveals that fifty years ago, a swordsman fought and defeated a cat-demon (basically a man in makeup left over from Andrew Lloyd Weber’s musical, Cats) at the location. Now his son Master Cheung (Chia-Liang Liu) must re-fight the demon. He enlists the aid of the pretty much useless Long (Mark Cheng), who falls for Cheung’s beautiful daughter, a reporter named Siu-Cheun (Lai-Ying Tang). The cat demon possesses Long’s boss and, after the boss is dispatched, moves on to the body of the boss’s mistress. After the Evil Cat kills off a pop recording star, the heroes, along with cowardly Inspector Wu (played by the film’s writer, Jing Wong) confront the demon for a final showdown in a police station.
As is often the case with Hong Kong cinema, the story is an excuse to string together the action scenes – which is fine if the action is brilliant, but in this case, it is often merely adequate, when it is not completely ridiculous. For example, when the Evil Cat first manifests in an office building, one of its victims ends up running around holding on his severed hand – and asking someone else to hold it for him! An extended sequence in which Long tries to kill his possessed boss with a car plays out like a TERMINATOR-wannabe, as does the finale in the police station, undermining the supernatural horror with more conventional action cliches. Probably the film’s only genuinely scary moment occurs when the Evil Cat’s current human host awakens on an operating table and wipes out the surgical team.
The acting features the usual Hong Kong posturing (the Evil Cat, in whatever body) scowls and points emphatically with two fingers extended). The male lead is far from heroic, being more of a joker accidentally roped into the proceedings. As if this were not enough, Inspector Wu is even more of a joker (it’s impossible to believe he’s in a position of authority).


The manifestations of the Evil Cat are disappointing. There are two brief glimpses of it in spiritual form (accomplished with animation), and at the beginning and the end we see its human hosts transformed into catlike beings, courtesy of makeup that is, to put it politely, comical in its impact. The rest of the time, the host are required to mimic cat-like movements, which they accomplish with all the skill of an acting student performing an exercise in a first-year acting class.

The film also demonstrates some odd sexist moments. We first meet Long in the company of a woman he calls a prostitute (although we never see any evidence of this). When he gives lift to Master Cheung, they decided to get rid of the woman by tying her up to a street lamp! When Long’s boss is possessed, it takes place mostly off-screen, but when the Evil Cat’s spirit passes on to the boss’s mistress, there is an extended special effects sequence clearly designed to suggest that she is being raped (the animated energy beams focus on her pelvis while she writes on a bed). Finally, the script rather cavalierly dismisses the leading lady at the climax, just to provide a last-minute surprise (along with an “it’s over – but it’s not” twist at the end). The result undermines any good will the audience had left for the film.

For fans of Hong Kong cinema, these blemishes may simply be part of the film’s charm, but EVIL CAT never reaches the giddy heights of the best Tsui Hark productions (e.g., A CHINESE GHOST STORY). It is unusual enough to merit some interest, but that interest is hardly rewarded when the filmmakers cannot be bothered to wrap their story up in a dramatically satisfying way. You may enjoy the ride, but you will regret the destination.

When Master Cheung explains the story behind the Evil Cat, his skeptical daughter Siu-Cheun remarks that it sounds like something written by “Wisely.” Wisely is a recurring character in Chinese literature and film, an author who writes about his weird adventures encountering unusual phenomena. The character can be seen in the 1990 film THE CAT (“Lao Mao”), which is about some alien warriors on Earth, including a super-powered cat who gets into a kung fu fight with a dog!

[EDITOR’S NOTE: EVIL DEAD 2 makes another appearance on home video today, this time in the Blu-ray format, so we took this opportunity to post a retrospective-review of the film, including an interview with director Sam Raimi.
Hands down absolutely one of the greatest achievements in the horror genre—ever. This is literally one of those films that have to be seen to be believed—it’s outrageous, over-the-top, and beyond what you could possibly imagine, if you haven’t already seen it. It’s a high-octane visual assault on the senses that starts fast and keeps accelerating, slowing down only enough to change gears from scene to scene. If you’re one of those people hung up on literary values like characterization and narrative coherence (and by the way, why are you even reading this?), then this film is not for you; if, however, you really appreciate good cinema—filmmaking pushed to the limits of what can be achieved with camera techniques and editing—then you’re guaranteed to enjoy this mind-blowing roller-coaster ride. END_OF_DOCUMENT_TOKEN_TO_BE_REPLACED