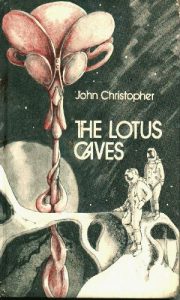 Syfy today announced it has commissioned a scripted pilot from Bryan Fuller, creator of DEAD LIKE ME and PUSHING DAISIES.
The show will be based upon the popular book The Lotus Caves by John Christopher, about colonists who rebel against the rigidity of their lunar colony by exploring beyond its proscribed boundaries and discovering a series of caves ruled by a super-intelligent, alien species.
Jim Grey (IN PLAIN SIGHT, PUSHING DAISIES) will co-write the script with Fuller.”

John Christopher is one of the pseudonyms of UK author Samuel Youd.
Under the Christopher name he also published the Tripods books, adapted by the  BBC and Austrailia’s Seven Network in 1984-85 as TRIPODS. Like that book series, The Lotus Caves novel also featured teenage protangonists. It was first published in 1969.
What this announcement might mean for the previously announced Walden Media feature film is unknown as yet.