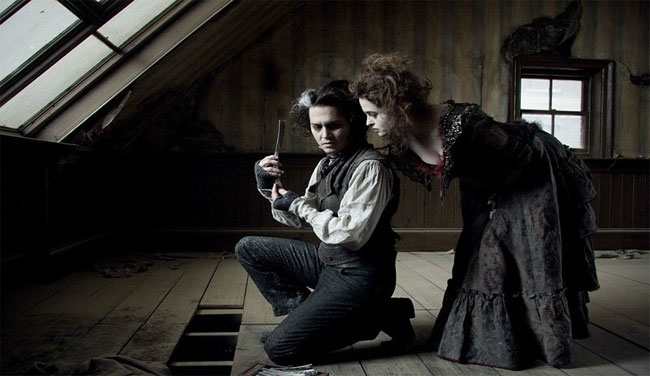 Got a sneak peak at SWEENEY TODD on Tuesday, and it is absolutely fantastic – one of the best things Tim Burton has ever directed! The film was not finished (the closingcredits were missing, and the sound mix will be tweaked over the next five weeks), but barring ratings problems, this appears to be the final cut in all its gory glory. The movie is pretty much your dream of what it would be, when you first heard that Burton and Johnny Depp would be turning the Stephen Sondheim musical into a movie: it’s a dark, brooding horror-musical-comedy that hits all the right notes.
Depp casts aside the over-the-top antics of Jack Sparrow for a much more self-contained performance as the Demon Barber of Fleet Street, in which the emotions (primarily a lust for revenge) ooze up to the surface in controlled bursts; without ever blunting the character’s razor-sharp edge, the actor demands that we sympathize and root for Sweeney as he slashes his way through half the throats in London. Alan Rickman is wonderful as the hypocritical Judge Turpin, whose machinations drove Sweeney to madness. Sacha Baron Cohen shines in a small role – you don’t have to be a  Borat fan to enjoy his work here. A special mention must go out for Timothy Spall as Beadle Bamford, Turpin’s right-hand man – a perfectly wrought performance of a  slimy character who mistakenly believes himself to be slick and smart. Hopefully, the Oscar academy will not overlook him next year even though his role is not of the showy, melodramatic kind that usually draws attention.


If there is a flaw in the movie, it is that the cinematic storytelling occasionally short circuits the musical nature of the source material. The acting performances, through close-up camera angles and cutting, convey the point of some scenes long before the songs wrap up, as when Anthony (Jamie Campbell Bower) first lays eyes on and falls in love with Sweeney’s daughter Johanna (Jayne Wisener), who is kept a virtual prisoner in Turpin’s mansion. Judging from the reaction and comments after the screening, fans of the musical will be pleased that the film is faithful to Sondheim, but SWEENEY TODD might have been even better if it had jettisoned more of the stage version, which on a few occasions feels like dead weight slowing the movie down.
The screening was followed by a session in which the marketing people asked for audience reactions. It was clear that the small audience (a bit over forty, mostly of fans of Burton and/or Johnny Depp) loved the film: over thirty called it great; eight called it very good; two said it was merely good; and no one admitted that he/she actively disliked it.
UPDATE: One of the two viewers who ranked the film as only “good” complained that the story offered “no closure,” but he did not get a chance to explain what he meant by that. (The film ties up all the plot threads; it may or may not show you exactly what happens to everybody, but it gives you enough information to figure it out satisfactorily.) This audience member also complained about Depp’s performance, saying that he had seen the actor in similar roles too often before; he called Sweeney “Edward Scissorhandspossessed by Jack Sparrow.” (“Scissorhands possessed by Jack the Ripper” would be more accurate; Sweeney has little if anything in common with the woozy pirate from CURSE OF THE BLACK PEARL, whose head seems soft from too much time in the sun.) Funnily enough, even though the “Scissorhands-Sparrow” remark had been intended as a criticism, the marketing people actually liked  it, saying they would like to put the comment in their promotional campaign.
UPDATE: One of the first questions that came up was regarding the singing voices, of the cast in general and of Johnny Depp in particular. According to a show of hands, a near unanimous majority of the audience thought Depp and his co-stars passed the test. Personally, I thought it was clear that neither Depp nor Rickman is a trained Broadway singer, but it doesn’t matter because they put so much acting into the songs that the lyrics become sung dialogue. I’m not saying their voices were off-key or flat, just that you could tell they were not going to throw back their heads and belt out notes that would shatter a champagne glass. The strength of their singing lay more in acting skill than in virtuoso vocal stylings, and the result is fully satisfying in the movie.
Several viewers raised their hands when the moderator asked whether any of the women thought there was too much blood; interestingly, none of them said this ruined the movie for them or would prevent them from recommending it to friends. A few pointed out that the highly stylized nature of the film – most of the colors are muted and almost monochromatic, like Halloween Town in NIGHTMARE BEFORE CHRISTMAS – rendered the bright-red bloodshed in a highly artificial way that muted the impact, making it more palatable, even for non-gore hounds.
UPDATE: Some people in the screening compared the violence to KILL BILL. Personally, I found it closer to one of KILL BILL’s inspirations, the “Lone Wolf” samurai movies made in Japan in the 1970s. Like those ultra-violent extravaganzas, SWEENEY TODD features blood the flows in watery geysers – the effect is so over-the-top that it becomes almost cartoony. Still, the sight of razor slicing flesh does have an impact, especially during the montage of Sweeney carving his way through at least half a dozen victims during a song.
To be clear, the session was not about gathering audience reactions in order to re-cut the film to make it safer for a general audience; the goal was trying to gauge the film’s appeal. From the various questions and statements uttered over the course of half-an-hour, it appears that the marketing people believe the film will appeal to three or four non-intersecting groups:

For some reason, there was some doubt that SWEENEY TODD would appeal to horror fans, even though it clearly is a horror movie, the songs notwithstanding. There seemed to be a misapprehension that “horror” equated with SAW, and that fans of that franchise and others of its ilk would not enjoy the Burton film.
Personally, I think nothing could be further from the truth. The blood explodes in only a few scenes of SWEENEY, but when it rains, it pours – in unbelievably graphic gouts of gushing red. I can’t remember when or if I ever saw this much red splashed across the screen in a mainstream studio movie. More important, the Sweeney character fits the classic movie monster mold: he does horrible things, but the audience identifies with and even roots for him to dispatch his victims, who more often than not deserve what they get.
It’s a mistake to think that torture-porn and/or high-octane violence are synonymous with horror. There are a few loud voices at horror movie blogs insisting that HOSTEL PART II, GRINDHOUSE, and 28 WEEKS LATER are what horror is all about, but these films can barely find an audience, if at all. Much bigger audiences will clearly turn out for scary movies – even ones with violence and blood-letting, like SILENCE OF THE LAMBS  – as long as they are done with some style and class. Certainly, SWEENEY TODD could draw in the same kind of viewers who turned SLEEPY HOLLOW into a blockbuster.
One other incident from the session deserves mention. One recurring question was whether the musical nature of SWEENEY TODD would turn off some young male viewers who might otherwise be interested in another Depp-Burton collaboration. In answer to this, an audience member recounted the following incident: after seeing a trailer for TODD before a screening of THE HEARTBREAK KID, two young men in the row in front of her turned to each other and enthusiastically cried out, ‘Fuck yeah!”
That’s not the kind of comment likely to find its way into the marketing report, so we preserve it here for historical purposes.
UPDATED AGAIN: I forgot to mention this previously, but one thought that went through my mind during the screening was that SWEENEY TODD reminds me of THE BLACK CAT, the classic 1934 horror film starring Boris Karloff and Bela Lugosi. The story has Lugosi as a man who returns for revenge after fifteen years in a Russian gulag (same amount of time Sweeney has been away). Meahwhile, Karloff’s character has married both Lugosi’s wife and – after the wife dies – Lugosi’s daughter (more or less what the Rickman character attempts to do in SWEENEY). In the end, Lugosi flays Karloff alive with a scalpel (sound familiar?). As in SWEENEY TODD, the audience is invited to identify with a demented character driven by revenge, even though his actions are almost as monstrous as those of the man he is targeting – perhaps even more so.
UPDATED AGAIN AGAIN: Some message boards linking to this report have complained that I neglected to mention Helana Bonham-Carter. I simply did not find her performance particularly remarkable. That does not mean it was bad or that I did not like her, only that I did not feel compelled to lavish suprlatives on her. For some reason, I was not concerned about her singing voice, so it was no surprise to hear her do well in that regard.  She certainly looked fantastic in the part: her lovely features covered in pale makeup that made her resemble the living dead, she was the perfect compliment to Depp’s Sweeney. Also, her name barely came up in the session after the screening, so it’s not as if I was reminded that this was a hot topic.
LATE UPDATE: Someone at the New York Post links to my article here. The brief post ends with this sentence:

Mr. Biodrowski doesn’t say if he signed the nondisclosure agreement that is standard before such screenings

No one asked me to sign a non-disclosure agreement. Nor was anyone else asked, apparently; long before I wrote my piece, the message boards at IMDB had lit up with responses from other people at the screening.
Also, I wanted to clarify a couple of points made in my original article: