Skip to content
STARGATE UNIVERSE hasn’t been an easy-to-like television series. The producers, perhaps bored with the engaging and competent characters of STARGATE SG-1 and ATLANTIS, decide to give us a ship full of frightened, angry people, most of them seeming totally unfit or incapable of dealing with their situation. The only “first-string player” was Dr. Rush (Robert Carlyle) — and he’s unpredictable, obsessive, somewhat misanthropic, probably untrustworthy, and quite possibly cracked.
Largely because of the dark (sometimes literally, to the point of not being able to make out what’s going on onscreen) and charmless quality of the episodes, I stopped watching the show regularly after a few episodes. However, friends told me that it improved as it went along, and I began watching more often when it came back after the mid-season break. 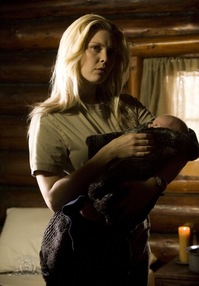 Having missed certain episodes left me in some puzzlement at the beginning of the season premiere, Intervention. The character T.J. (Lt.. Tamara Johansen, played by Alaina Huffman), the ship Destiny’s medic turned de facto doctor, wakes in a rustic cabin. This is a surprise, because when last seen she was on Destiny, shot by the Lucian Alliance invaders, with her and her unborn child’s life in the balance. Adding to the surreal quality, she meets an old acquaintance, Dr. Caine (Tygh Runyan).
She knew him, but I didn’t—apparently, in the episode Faith last season, he and others who had been trapped on the ship chose to stay behind on a planet that appeared to have been made by aliens, seemingly with the needs of humans in mind. In this “dream or reality” setting she learns her baby (a girl she names Carmen) is alive and well, while back on the ship TJ lies unconscious, the child dead.
On the Destiny, Dannic (Ian Butcher) the furious second in command of the Lucian forces, would just as soon kill all the military personnel, and all of the civilians they don’t need to run the ship, since their leader was killed. Col. Telford (Lou Diamond Philips) was responsible for that, though they still tend to believe that his brainwashing to act in their interest , rather than Earth’s, remains intact— despite some suspicion.
Cooler heads prevail, and the Earth people are sent via the ship’s Stargate to a barely habitable planet.

However, Dr. Rush has a plan, and enough control of the ship’s systems to force them to bend to his will. He’s seen to it that the ship’s shields will not hold up to another burst from the nearby pulsar, and it’s radiation will kill everyone not holed up with him in the most protected part of the ship.
Despite objections, Rush will carry out this plan, unless the high-jackers surrender. Dannic refuses, and it looks like a stalemate between two fanatic wills—until a female invader (Ginn, guest star Julie McNiven) takes matters into her own hands.
The civilians and military crew return, and Col. Young (Louis Ferreira)  is dismayed to learn it was Dr. Rush who saved the ship, once again. Young suspects Rush of having stranded them on the Ancients’ ship intentionally, and being a calculating, physical coward. Rush feels (with  justification) that Young is incompetent to command, an unstable, short-sighted bully and moral coward.
Last season, Rush tried to frame Young for a crime to get him out of the way of his work, and Young beat Rush savagely and left him for dead, stranded on a barren  planet. Only the intervention of some unpleasant aliens returned him to the Destiny, and now they’re a lurking menace, hoping to stalk and seize the ship.
Col. Young also learns of the death of the child he had inadvertently fathered with T.J.  and takes to drink, while she goes to the observation port and sees the beautiful nebula that she had been shown on the alien’s planet, perhaps comforted with the thought that her daughter might truly be alive.

STARGATE UNIVERSE took its time to develop its characters to the point that viewers were likely to care about whether they lived or died. For many episodes, only the chubby young computer genius Eli Wallace (David Blue) was a consistently likeable presence.
The show initially seemed to suggest that even before being trapped on a spacecraft sailing through another galaxy (yes, it’s that far out), many of these people were out of the their depth, and possibly borderline crazy. That was a big problem, I thought; personal picked to serve off-Earth at a research station should have been more capable, and take some time to break down under the stress of the situation over the course of a few episodes. Instead, you were left to wonder why the hell most of them were ever in their military and scientific positions at all.
Now, you’re beginning to see some of the strength and resourcefulness within them. The actors are good in their roles, and the show is getting very interesting. Maybe they’ll even get enough power to turn on a few more lights.
The recent change to Tuesday at 9:00 PM (ET) from Friday nights seemed to damage the premiere’s ratings, judging from online sources. I hope that people will tune in, even if they had given up before, like I did—because judging from Intervention, this is going to be a much more enjoyable season.
STARGATE UNIVERSE: Intervention —MGM Television, SyFy Channel.
Directed by Andy Mikita, written by producers Joseph Mallozzi and Paul Mullie.