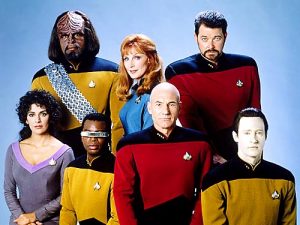 There’s been fan speculation that CBS/Paramount was planning to remaster STAR TREK: THE NEXT GENERATION in HD for Blue-Ray release. Now there’s some confirmation that a test of four episodes are being done.
LeVar Burton revealed on his twitter feed that he saw some of the work being done.

The Digital Bits reports that an un-named source told them them episodes being up-converted are the two-part premiere  Encounter At Far Point Parts 1 & 2 , Sins of the Father, and The Inner Light.
The “Sampler Disc” will reportedly be rleased in Germany on December 17th, though no formal announcement has been made by CBS/Parmount.
THE NEXT GENERATION actually poses more of a problem in HD conversion than the original series did. High quality negative and prints of that series exist in Paramount vaults. While NEXT GEN was also shot primarily on 35mm film, the series was edited and much of the effects composited on standard denfinition 525-line video (actual resolution 720X486).
In the early years of the show, the equipment used was not much more advanced than a netwrok news edit room, sometimes with rather “soft”-looking film transfers,  and  FX elements occasionaly generated directly on video. It’s unclear how much of the original materials were stored, and what condition they might be in.
One might speculatethat the episodes would have to be re-edited nearly from scratch, a formidible proposition. A simple ‘up-conversion” through line doubling and similar methods would likely yield inferior results.
In other STAR TREK news JJ Abrams told NBC that he might consider the idea of bringing STAR TREK back to television.

“It’s never really come up, frankly, but depending on what that would sort of be and how it would be done I’d be open to the idea of it. Right now we’re just sort of focusing on making a movie that’s worth people’s time.”

And regarding the sequel to his hit STAR TREK cinematic reboot:

“I’m excited. We’re working hard. We’re very close and I hope to have something to talk about concretely soon. I do feel like if ‘Trek’ happens as we hope that it will, it will be a fun return to that group of people, because it’s an amazing group.”