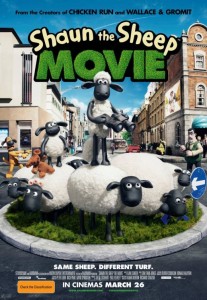 Despite some forays into computer-generated animation (Flushed Away, Arthur Christmas), Aardman Animations remains committed to the art of stop-motion, as evidenced by their most recent theatrical release, 2015’s Shaun the Sheep Movie, which sees the company struggling but ultimately succeeding at expanding their television series a feature film. The movie lurches to a shaky start, as if uncertain how to stretch its concept to full length, but after a wobbly first act, the narrative hits its stride and runs smoothly to a successful finish, delivering delightful entertainment on the way.
Personally, I was dubious about the potential of a Shaun the Sheep movie. I preferred the title character when he played a supporting role in his debut, A Close Shave, the Oscar-winning short subject starring the lovable characters Wallace and Gromit. The Shaun the Sheep television series moved the character to center stage, but there was not necessarily that much distinctive about the little fur-ball. Sometimes he was the one coming up with clever schemes, but other times he just happened to be the one swept up by the zany antics (i.e., in the first episode, he is dragged around by a hungry, high-speed goat, trailing behind like a water-skier). The show shifted the setting from town to country, placing Shaun on a farm run by another human-dog combo, the Farmer and his Sheep Dog (amusing but no match for Wallace and Gromit). A typical 20-minute episode consists of three unrelated segments, each telling a mini-story. The series cleverly eschewed dialogue, relying only on grunts, bleats, and exclamations (even from the Farmer), but the stories tended to be more juvenile in their appeal than Aardman’s best work. I will admit to being thoroughly charmed by “Who’s the Mummy” (which despite its title is not a horror movie spoof), which had Shaun bedeviled by a quartet of freshly hatched chicks who imprint on him (they resemble tribbles with tiny beaks, and they were so ridiculously cute that I had to laugh in spite of myself). Nevertheless, the question remained: could the format of 6-to-7-minute segments be stretched to full narrative length?
Shaun the Sheep Movie begins with a recreation of the show’s opening title sequence, portraying Shaun, the other sheep, the Farmer, and his dog getting up in the morning; the joke is that this sequence, which repeats weekly on the series, is repeated multiple times in the film, creating an immediate sense of an endless, boring routine, which ultimately motivates Shaun to break that routine by fooling the farmer into sleeping in late, so that the sheep can have a day off. It’s just enough of a narrative tidbit to set up a situation in which the sheep can get into some hi-jinx; basically, it’s little more than what one would see in an average episode, and it initially seems as if the script is simply going to string together several such episodes until they fill the minimum necessary running time. Things start to feel a little desperate when a camper-trailer (in which the farmer is sleeping) rolls down the hill and into nearby city, creating an excuse for one of those action-packed high-speed chases that Aardman does so well (e.g., The Wrong Trousers with Wallace and Gromit); one almost gets the feeling that Aardman is stumbling into DreamWorks Animation territory (in which an extended, gratuitous action set piece is de rigueur in the first twenty minutes of any film).
Fortunately, all of this is just preamble – a messy first act setting up the fun to follow. Once the Farmer awakens in the city, the story moves smoothly from one development to the next, and the script never again seems to be padding itself unnecessarily. The Farmer suffers amnesia, but he recollects enough of his skill with a pair of sheers (originally used on the sheep) to become a successful barber; Shaun and the other sheep, meanwhile, find that the farm doesn’t run so well without the farmer, so they embark on a mission to rescue him, which is complicated by an officer from animal control, who is every bit as threatening and efficient (but a lot less unpleasantly designed) than the one in Madagascar 3).
For its second two-thirds, Shaun the Sheep movie is pretty much a non-stop delight, in which the comic set pieces (such as the sheep disguising themselves as humans to thwart the animal control agent) are effortlessly blended into the narrative. As always, Aardman provides state-of-the-art stop-motion, effortlessly realizing sequences traditionally difficult to achieve in the medium (e.g., splashing water, quickly moving objects). Not all of these tour-de-force moments are high-octane highlights; some are just amusing throw-aways, such as the delightful sequences in which the sheep lull the Farmer into falling asleep by jumping one by one over a fence. The basic joke (counting sheep puts people to sleep, right?) is only mildly funny, but the visual execution augments the humor by having the sheep ever so subtly go into slow motion as they reach the peak of their jump, the floating effect enhancing the hypnotic quality upon their intended victim. 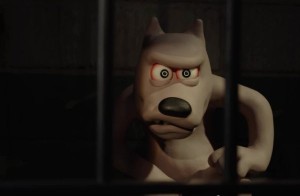 Unlike many of their computer-generated competitors, who sometimes don’t know when to modulate the animated anarchy, the Aardman team know when a simple sight gag is as entertaining as a technical tour-de-force: during a stint in jail, the sheep inmates are continually perturbed by the silent stare of an angry dog in the cell opposite; the joke is that his expression is exactly the same every time the camera cuts to him (which means of course that the animators could save time by not animating the figure). The recurring images eventually pays off with a punchline I won’t spoil, except to say that it explains the character’s total lack of movement.
In a world filled with CGI blockbusters that seem to tell the same tale over and over (little guy achieves his great destiny and/or a sense of belonging), Shaun the Sheep Movie offers a pleasant change of pace. The tactile quality of stop-motion puppetry grounds the visuals – not in reality, exactly , but in a sense of physicality that enhances the sight gags and set pieces; the narrative delivers unpretentious fun without trite lessons about letting go or finding inner self.
I don’t think I will ever love Shaun the Sheep as much as I love Wallace and Gromit, but to my surprise the little lamb’s feature-film debut is actually better than the disappointing Curse of the Were-Rabbit. Shaun the Sheep Movie improves on the television series, providing the kind of stop-motion delights that should amuse adults whether or not they have children.