As you can see, it’s Jason Mania here at Cinefantastique Online. By clicking on the tag for Friday the 13th, you can check out reviews of the old films and of the disappointing reboot that opened this weekend. One interesting aspect of the new film is that it brings into focus the human tendency to view films from one’s formative years as being the apex of cinematic achievement: everything before is just one long prologue; everything afterward is just one dull decline. This tendency is amusing in the case of the FRIDAY THE 13TH franchise – which, unlike most famous horror franchises, does not boast a single classic films among its many iterations. No matter how many disappointing sequels there were to FRANKENSTEIN (1931), HORROR OF DRACULA (1958), or A NIGHTMARE ON ELM STEET (1984), the originals continue to hold their own as great movies – something that cannot be said for 1980’s FRIDAY THE 13TH, a rather lackluster, mechanical thriller most notable for the gory special effects by Tom Savini (DAWN OF THE DEAD). 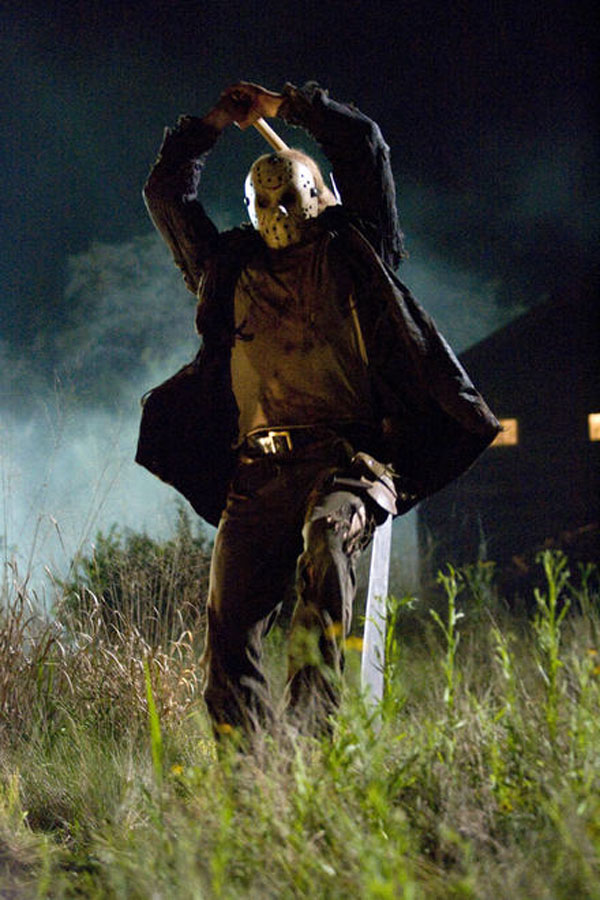 It is, therefore, with a certain wry detachment that I read heated debates on message boards about whether the new FRIDAY THE 13TH lives up to the old. All too predictably, fans who grew up watching the originals tend to give the new film a thumbs down, while the next generation of horror fans are all to happy to embrace the new incarnation of Jason Voorhees. I feel a certain sense of vindication, knowing that once upon a time these older FRIDAY fans were disparaging horror films from an earlier generation; as it always does, the pattern comes full circle, and now they reap what they used to sow, scorn from younger viewers who think horror films of their generation kick ass over boring old “classics.”
I don’t really have a dog in this contest, so I am content to let both sides claw each other bloody while I sit on the sidelines, but I do think it worth noting that the new FRIDAY promises to exactly duplicate its progenitor in at least one regard: while being critically reviled (27% at Rotten Tomatoes), it will earn a ton of money (the weekend estimate so far stands at $42.2-million).
What this means regarding critical approval versus popular taste is not a question I want to explore at the moment. Rather, I want to take a moment to step back and remind older viewers that being old does not necessarily make a film better than something new. Yes, we recall the favorites of our childhood and teenage years with fond nostalgia, but that doesn’t mean they are all classics, and we shouldn’t begrudge the current movie-going generation for enjoying films that are probably no more flawed than many that we think of as a “masterpiece.”
This may sound like something that should go without saying, but sadly it bears repeating. This truism first occurred most obviously to me several years while channel-surfing with an older friend, a fan of classic horror from the Universal era (1930s and’40s) and stumbling upon FRIDAY THE 13TH PART VII: THE NEW BLOOD. While my friend (who shall remain nameless) launched into a rant about how terrible modern horror films, I tried to point out that this particular film was at least trying to do something a little different and interesting with the old formula.
When that strategy failed to appease him, I shifted to pointing out that, for better or worse, the FRIDAY films are really not much worse than the old MUMMY movies that are considered “classics”; in fact, when you come to think of it, Jason and the Mummy have a lot in common. Both are slow-moving, silent, decaying monsters whose ability to instill fear relies much upon their implacable nature. You might be able to outrun them, but they never tire and they never quit; eventually, inevitably, you will find yourself pausing for breath or running down a blind alley with no way out. Either way, once you are targeted, you’re doomed, even if that doom arrives on striding feet that do not break into a run.


One might argue that the FRIDAY films are cruder, relying on gore rather than subtlety, but the MUMMY film are not necessarily subtle. The very first one, Universal’s1932 THE MUMMY with Boris Karloff, did keep the title character’s decayed visage and bandaged body almost entirely off-screen, but when the studio revived the concept in the 1940s, the whole point was to show this ugly, rotting monster, the very sight of whom was supposed to instill terror. 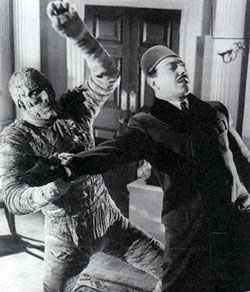 When Hammer Films remade THE MUMMY in 1959, the character took another step in Jason’s direction. Combining elements from the 1932 original and Universal’s subsequent ’40s films, Hammer’s Mummy (played by Christopher Lee) was no longer an arthritic cripple shambling along at a snail’s pace; instead, he was a striding juggernaut, smashing through windows and doors and mowing his victims down with admirable dispatch. He did not wield any sharp implements, but their was a brutal efficiency to his methods, as when he rebels against the high priest and breaks his back over his knee.
This last sequence finds an approximate corollary in FRIDAY THE 13TH PART VI: JASON LIVES, when Jason bends a sheriff backwards. I can’t say that writer-director Tom McLoughlin was making a direct reference to the 1959 MUMMY, but the film shows him to be a fan of classic movie monsters (he names a store after Boris Karloff, the original Mummy, for example).

Also a fan of old horror movies was John Carl Buechler, who directed the next FRIDAY THE 13TH film, PART VII: THE NEW BLOOD. He told me once that the slasher icons of the ’70s and ’80s (Leatherface, Michael Myers, Jason) did not have the same appeal as the previous generation of horror characters like Dracula and Frankenstein; only when Jason became one of the walking dead (in JASON LIVES) did Buechler start to find the character interesting. Indeed, one of the strengths of Bueckler’s FRIDAY film is the depiction of Jason, whose costume and makeup (when it is finally revealed) go a long way toward making him resemble a good old-fashioned movie monster.
What all this tells me is that the distinctions we might like to draw between films of different eras are not so clear cut as we might like to believe. Our love for films we saw at an impressionable age is not to be dismissed lightly, but neither should it blind us to the strengths and weaknesses of films are either older or newer than the ones we usually prefer. Here at Cinefantastique Online, we treasure classic movies not because they are old but because they are good and/or historically important. We may look askance at popular trends, and we don’t quaff each new brand of Kool-Aid that Hollywood pumps out to an undiscriminating public, but we don’t dismiss the new simply because it is new; we appreciate good work from any era. I wish the new FRIDAY THE 13TH had been a better film, one worthy of becoming the big success it seems poised to be. But I won’t let my disappointment fool me into thinking that those old Mummy movies are somehow intrinsically better in a way that a Jason film could never hope to be.

2 Replies to “Sense of Wonder: Jason vs. the Mummy”