We’ve just finished Halloween, gained an extra hour on the proverbial space time continuum and El Nino is going to hit Southern California with inclemency worse than Sharknado 4. What more could possibly make So-Cal the place to be? As nature warns Pacific Coast residents to buy flood insurance, San Diego announces the arrival anon of  the 16th Annual San Diego Asian Film Festival (SDAFF), which will flood the city with 130+ films from 20 Asiatic countries over a 10-day period, November 5-14. Of note, SDAFF is now considered to be the largest showcase of Asian cinema on the West Coast and this year’s festival is featuring some far out fantastical films.
Though Korean American Lee Ann Kim, the Pacific Arts Movement and SDAFF’s founder and executive director, has parlayed more of the SDAFF’s film programming into the hands of artistic director Brian Hu, in this time of more correct eating habits, she’s become somewhat of a cinematic vegetarian. Kim tranquilly analogizes, “My involvement in the festival is that there are so many ingredients in the salad and I’m basically the dressing…once it’s tossed, it tastes fantastic. I connect the dots and make sure that people have the right resources and right direction.” 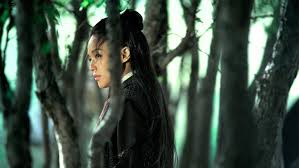 One of this year’s directions is the heralded return of SDAFF’s love affair with fant-Asia films, the only festival this year that will deliver movies wrapped in a glorious array of genres that is sure to rock your soul, craze your brain and increase your blood pressure to 150/freaked out. To me, the ultimate in fant-Asia is cutting edge period piece, martial arts extravaganzas, and what better film is there to begin the fant-Asia aspect than with a movie in the running for an Academy Award for best foreign language picture, Hou Hsiao-Hsien’s The Assassin (2015). Other times this has happened for kung fu films is with King Hu’s Come Drink With Me (1966), Ang Lee’s Crouching Tiger, Hidden Dragon (2000), Zhang Yimou’s Hero (2002) and House of Flying Daggers (2004), and Wong Kar-wai’s The Grandmaster (2013). The difference being for Taiwanese auteur director Hou, is that he received the Best Director award at Cannes this year for Assassin, as accolade-giving critics worldwide have averred that it’s not your typical wu xia epic.
With Taiwanese roots and in his fifth year with SDAFF, Chinese American Hu gleefully elaborates, “In the past we’ve tried to show martial arts films that promote different kinds of artistry, like special effects, wire work, use of 3-D and of course fight choreography. So we can see how these filmmakers are thinking when it comes to this genre and how they can do something innovative with it.

“Audiences will watch this film because it has such a bad-ass title. Yet it’s a film that’s daring as it almost has no action, almost no dialogue, almost no story, but it has an incredible amount of visual beauty and powerful ways of developing characters through peeking at them. As you watch it, you get a feeling that this is probably what it looked like during the Tang Dynasty and what it was like to spend 10 minutes with someone from that era. Martial arts films are typically wall-to-wall action, but Assassin reminds us that action happens in the context of loneliness, sadness and social pressures that lead you into a dark corner. Hou says that assassins get in there really close, kill, then get out of there and that’s it. No posing. This is what makes this a beautiful film.”
Sounds to me like the fights are what we used to see in old Akira Kurosawa samurai films and in the Shaw Brothers auteur director Chu Yuan’s kung fu classics of the 1970s. If you’ve seen Toshiro Mifune in Kurosawa’s Sanjuro (1962), the big finale duel is one simple sword-slashing strike to his opponent’s heart.

Yakuza vs. Zombies pretty much samuraizes what to expect with the Xtreme Japanese film Deadman Inferno or as it is called in Japanese, Z Island. Z stands for Zeni, a place where opposing families of yakuzas, promiscuous karate teen girls, a dorky doctor, a reggae-rocking angler and a castaway cop all attempt to Gilligan Island around running zombies…and in a nutshell, zat is zee problem.
Hu shares that it’s been a while since SDAFF has screened this kind of film mainly because the genre is clichéd, extremely misogynistic and they just kept piling up to the point that their novelty wore off. “However,” he joyfully reveals, “Deadman is hilarious and touching, because it’s about a family coming together because of zombies and they’re all forced to stand up for each other. In regard to this genre of films, there’s a lot of funny and random humor in Deadman and it’s also the film you’ve been waiting for. It’s not as ultra violent like past productions but it gives you all the kicks you need.”

According to Hu, Asian cinema isn’t always known for sci-fi fantasy film, so what happens is that fantasy now seeps into other genres. The Japanese film Whispering Star is about a delivery-robot who goes all UPS (Unidentified Person in Space) and browns from planet to planet dropping off packages for human clients. Roosting behind her intergalactic console like a delivery pigeon waiting to send messages via tweets, delivery fem-bot fantasizes about the world of humans, so close in parallel dementia, yet so far apart in space and far away in each others memories.
Then there’s the Korean romantic fantasy Beauty Inside that poses the scenario; imagine waking up every morning with a different face and then imagine falling in love with somebody, only to know that their first impression will be the last. It’s Groundhog Day (1993) meets 50 First Dates (2004). The Korean comedic fantasy Wonderful Nightmare spices with Heaven Can Wait (1978) gimchi when a city’s top attorney dies in an accident, but is given a second chance at life if she can trade places with an ordinary mother for one month.

Hu posits, “Whispering Star is really an art film that uses sci-fi to express it’s own idea of humanity. Beauty Inside is a Korean romantic comedy, which these days are a dime a dozen, but they use a fantasy scenario to liven up the genre. It’s a high concept, geek gimmicky set up and asks the question, if you’re a different face everyday, how can you go on a second date? Yet it’s such an achievement in direction because the director had to orchestrate so many performances as one character and make them seem like one character by so many different actors…man, woman, old and young…and then make us feel that we are watching the same person. It’s an incredible way of having us empathize with a certain perspective of love and how we as the audience spend time with a character that must ask herself, ‘Can I fall in love with someone that has a different face every day.’ To have us empathize with this kind of romantic possibility is so brilliant.”

Korea strikes again with a body switching Heaven can Wait (1978) thematic device in Wonderful Nightmare, with a Seoul twist where Gangnam Style is perhaps more popular that Chubby Checker’s The Twist. And speaking of music let’s not forget Japan’s Love and Peace. Hu chimes in, “This film converges on the rock operas of the 1970’s and ’80s…there’s something very sci-fi-ish with David Bowie, and this film evokes all of that with it’s Japanese sensibility of fraudness. Yes, it has talking turtles, cats and all kinds of other things that can talk too. It’s a lot of fun, it’s bonkers, and has great music. Director Sion Sono wrote the songs himself and it’s something he’s wanted to do for decades.”
Finally, three and a half fant-Asia films on the fringe. Directed by Vietnamese American Viet Nguyen, the comedy horror thriller Crush the Skull is about a couple in love that needs some fast cash and thus they break into a house that has no exit, no cell phone reception and no explanation for the torture pit they discover. Hu smilingly shares, “It’s seriously scary, wickedly off-kilter, and the funniest Asian American film in years.” 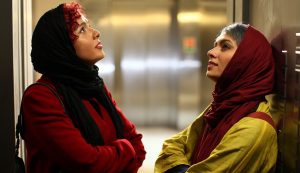 Don’t look now, but Iran explodes into the festival with director Ali Ahmadzade’s surreal loose comedy where fantasy and sci-fi seep into the film in a highly unusual way…it’s a blast but not a bomb. Atomic Heart is about two drunk party girls trying to drive home after a big night on the town who fail miserably as laced with Farsi trash talking, they have a zany run-in with a Saddam Hussein look-a-like but a saving run-out with a George Clooney doppleganger. It’s a culture that’s out of our minds and world, but a film that gets into our hearts and soul.
Beware the oleo…wait that’s butter…I mean the olio of the experimental, hybrid documentary of Daniel Hui’s Snakeskin that spreads contemporary and future Singapore like margarine on toast. With a queer eye from a 2066 cult member surviving guy that melds with a Malay cinema actress, the Shaw Brothers studios, and enforcers, and  exiles/ghosts, and activists…oh my, who are all ineptly but affably infantile, Snakeskin may rattle your thoughts and constrict your mind so much that I recommend you take an anti-hissss-tamine to the theater.

And finally the Filipino film Swap, which is not so much a fant-Asia film as it is a suspense thriller that is a must see for filmmakers looking for something uniquely edgy with cinematic savvy not often seen in film history. Hu explains, “This is a weird story. As it turns out, in one night I was watching two Filipino films both of which were single take movies. One wasn’t successful but with Swap, something new was  happening here. There’s been single take films but this one is full of flashbacks and dream sequences. You can only imagine how the actors are rapidly changing clothes off screen and getting sets ready on the run. The filmmakers will be at the festival and we all want to know how many takes did it take to get it right. The crazy thing is, Swap is based upon the director’s own history of being a kidnapped baby back in the ’80s.”
Fearless festival leader Kim adds, “How does this experience of being kidnapped as a child manifest it’s way into such a film? You have to say to yourself that these artists, don’t just do it for fun but do it because they have to do it…they have to do it.”

For information regarding films, dates and times, and how to get to their respective venues please visit http://festival.sdaff.org/2015/. One neat thing that SDAFF has, and it’s something that no other film festival in the world does, is that there will be an interactive booth from Saturday, November 7 through Monday, November 9, where filmgoers can get a free Chi Reading for their health and well being.
Kim’s final words, “Over the years, I’ve noticed that our audiences, like life-changing, inspiring and uplifting stories. Who doesn’t? They do well at the festival and that tells me that we have the right audience because our organization is not only here to entertain and inspire, but to also build a more passionate society, and part of that is to give inspiration, and to expose audiences and open their minds to more new experiences. I’ve been through multiple generations of people here at Pac-arts and I’m grateful for this work, and I believe I’m in the right place at the right time right now. The people that we have here are so special to me and this festival is our love letter to the community.”