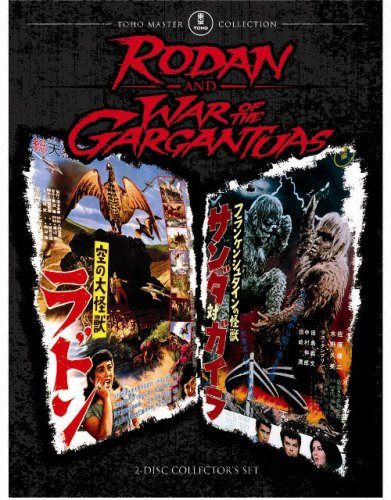 For kaiju(i.e. Japanese Giant Monster movies) fans, this double-bill of two of the best non-Godzilla movies represents a must-have. Featuring both the original Japanese and the revised American versions, this double-disc DVD presents these kaiju classics with the respect they have never before received on U.S. shores.
While Rodan went on to become Godzilla’s sidekick in a number of the later monster team-up movies, the original RODAN is quite a respectable achievement in its own right. This is something of a transitional film, abandoning the somber black-and-white moodiness of Toho’s earlier monster movies but still retaining the serious science fiction tone. Although shot in color, this was the last Toho kaiju in the Academy 1.33 aspect ratio. Subsequent releases from THE MYSTERIANS on were shot in the widescreen scope ratio of 2.35, and from MOTHRA onward the movies would veer toward light-hearted fantasy. Unlike many of these later kaiju efforts, RODAN shows director Ishiro Honda still striving to build an atmosphere of unease, much like the original GODZILLA.

RODAN’s storyline features a slow build-up over the discovery of the mutilated bodies of some miners on the island of Kyushu. Brave miner Shigeru (Kenji Sahara) leads an investigation but winds up getting trapped in a cave-in. The miners have been killed by some giant insect-like larvae, but when a giant pterodactyl egg hatches, the real menace -Rodan – emerges and makes quite a breakfast of the killer larvae, while leaving the observant Shigeru in a state of shock. Unlike Godzilla, who knocked buildings over with his claws or burned them with his radioactive breath, Rodan spends most of his time in the sky, creating hurricane-force winds with his wings and wreaking major devastation with the shock waves as he passes overhead. Instead of old stand-by Tokyo, the city of Saseabo gets leveled by the onslaught as Rodan is joined by a female mate. The whole thing reaches an unusual climax with a suicide pact between the monsters who plunge themselves into a growing volcano for a memorably somber finish.
This disc represents the DVD Region 1 debut of the original Japanese version of the film, which is 10 minutes longer than the truncated American version with which American fans are familiar. In addition, the Japanese version comes with stronger and brighter colors. At the same time, the American version is interesting, especially as almost the entire dialgoue track was dubbed by Paul Frees (WAR OF THE WORLDS) and Keye Luke (GREMLINS), doing different characters with stock Asian accents, and with a very young George Takei (STAR TREK) giving the English dialogue for Japanese children.

Even more exciting is the first widescreen presentation of WAR OF THE GARGANTUAS on domestic home video (previously released on a full screen laserdisc). I had originally caught up with the movie on the Million Dollar Movie as a kid, where it seemed to play every night for a week, and I enjoyed it so much that I re-watched it almost every time.
The film was created as a sequel to FRANKENSTEIN CONQUERED THE WORLD, which depicted a monster that could regenerate from a single body part, in this case resulting in two monsters. Both retain a flat-topped Frankenstein-type dome and headpiece, but American producer Henry G. Saperstein decided to rename the monsters “Gargantuas” and obscured the continuity.1In the Japanese version, after the revelation that there are two Frankensteins, the monsters are given the names to distinguish them: Sanda (brown one) and Gaira (evil green one, spelled “Gailah” in the English subtitles). The Japanese version is actually 4 minutes shorter than the American cut and has a darker picture quality.

WAR OF THE GARGANTUAS has an intriguing opening: in the midst of a rainstorm, a giant octopus attacks a Japanese freighter; helps seems to arrive when a Green Gargantua pries the octopus away, but instead of rescuing the sailors, the monster starts eating them. We are then introduced to Dr. Paul Stewart (a likeable but indifferent Russ Tamblyn, replacing Nick Adams who starred in FRANKENSTEIN CONQUERS THE WORLD) and his beautiful assistant Akemi (Kumi Mizuno, returning from FCW), who refuse to believe that the carnivorous beast could have been the baby Brown Gargantua (looking much like LAND OF THE LOST’s Chaka) they had nurtured until he ran away.2
It’s not long before the Green Gargantua emerges from Tokyo Bay and ambles across Haneda airport where he devours a female office worker. The American version adds a shot of the worker’s chewed clothing, but the Japanese version cuts poignantly to some flowers on the ground. Green Gargantua runs away when sunlight emerges from behind some clouds, returning at night to pick up a Caucasian lounge singer warbling the memorably awful song “The Words Get Stuck in My Throat” (sung in English in both versions), whom he drops when all the nightclub lights are turned on.
One distinction for GARGANTUAS is that, for once, the Japanese military prove somewhat effective. They bring out their giant Maser cannons and do some damage on Green Gargantua  before he gets away to wrestle around the city with his better-natured brother, Sanda. Also notable: after this film and DESTROY ALL MONSTERS, Toho decided to save money on miniature buildings by setting their monster rumbles in the countryside rather than in cities, rendering GARGANTUAS one of the last epics of destruction before Godzilla was revived in the ‘80s.
The print of WAR OF THE GARGANTUAS is bright and vibrant, though there are some rare instances of aliasing problems due to compression. The sound is good overall, though Gailah’s chirping noises can remind one of a French rooster and begin to grate on the nerves after a while. The Japanese soundtrack presents Akira Ifukubie’s complete score (with a great march like the one the composer wrote for DESTROY ALL MONSTERS); the American version replaces some of the original score with library music.
A great bonus feature is BRINGING GODZILLA DOWN TO SIZE, written and produced by GODZILLA experts Ed Godziszewski and Steve Ryfle. Though it has some pacing problems, the documentary gives us behind-the-scenes stories concerning Eiji Tsuburaya (special effects supervisor) and art director Yasuyuki Inoue (miniature city designer and unsung hero of kaiju movies), as well as commentary and reminiscences from Haruo Nakajima, Kenpachiro Satsuma and Tsutomu “Tom” Kitagawa, who played Godzilla in the ‘50s-‘70s, ’80-‘90s, and GODZILLA 2000 on, each explaining and demonstrating their interpretation of the character as well as offering anecdotes about difficulties and near accidents, especially in Toho’s large water set. While similar features have been included on Japanese import DVDs (sans English subtitles), it is great to see a number of Japanese artists who worked on kaiju movies and hear their stories in a feature-length documentary.
This set is highly recommended to all lovers of kaiju eiga!
RODAN/WAR OF THE GARGANTUAS. Classic Media release through Genius Entertainment.