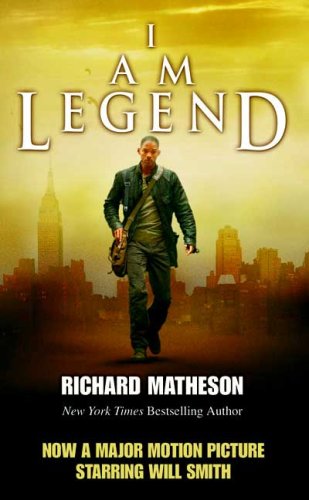 With Warner Bros. impending release of I Am Legend, I recently checked out The Omega Man with Charlton Heston, the second abortive attempt at bringing Richard Matheson’s classic end of the world novel to the screen.  That brought to mind a piece by columnist Marilyn Beck, claiming that Charlton Heston wanted to make the movie after he had read Matheson’s novel at the suggestion of none other than Orson Welles while they were working together on Touch of Evil at Universal in 1957.
Here’s an excerpt of Marilyn Beck’s 1971 column:

HOLLYWOOD – Feb 10, 1971.  Charlton Heston is terribly excited about “I Am Legend.” Actually, he has been for the last 14 years. The story first grabbed him back is 1957, after be read the novel at Orson Welles’ suggestion. Chuck, who’s a whiz on the big things, but who frequently has trouble remembering mundane matters like his phone number and book titles, asked producer Walter Seltzer in 1957 to hunt down “My Name Is Legend” for a possible film project. Seltzer eventually found a work bearing that name. It was a 1,400-page anthropological text. And when they finally located the science fiction novel Heston was actually interested in, a European film company was already adapting it under a different title, (“The Last Man on Earth”).

Now that, 14 years later, Seltzer and Heston have finally gotten together to film the tale of the few who survive a biological holocaust, much of the original story has had to be changed to make it believable to today’s more with-it, more sophisticated audiences.

Like many stories involving Orson Welles, the facts seem to have gotten a bit garbled.  According to Charlton Heston’s own published journals, the book Welles gave him to read was not Matheson’s “I Am Legend,” but George R. Stewart’s 1949 book “Earth Abides,” also about a worldwide plague that leaves only a handful of people alive. It was turned into an effective two-part radio show on “Escape” in 1950 that had echoes of Welles’ own famous War of the Worlds radio broadcast. In his fascinating journals, Heston talks about how he and Welles planned a filmmaking partnership towards the end of shooting on Touch of Evil, with “Earth Abides” being considered as one of many possible projects. Other titles bandied about included “Lord Jim” and “Don Quixote.”
Here are the relevant entries from Heston’s Journals:

CHARLTON HESTON JOURNALS – 1957
March 27: The shooting (of Touch of Evil) went swimmingly tonight, and the adjective is thoughtfully chosen. Thank God it was the warmest night we’ve had because I spent a lot of it treading water across that damn antique travesty of a Venetian canal. Orson also was very excited about a novel he’s found to make (George R. Stewart’s 1949 book Earth Abides).
March 30: I came in after dawn this morning, too full of the exhilaration of work and watching the sun come up to go to sleep.  My son took his first steps one year ago today, and I almost feel I’m only beginning to do the same on this film.  Orson is certainly the most exciting director I’ve ever worked with.  God… maybe it will all really begin to happen now.
March 31: A lazy, late-sleeping, tennisy Sunday morning, filled with sun and Fray’s laughter and hot cakes after four sets. After lunch and the nap this night shooting schedule seems to require, even on a day off, I drove over to Orson’s to pick up Earth Abides, the science fiction novel he thinks might do for a film.

Of course, when Heston did get around to making The Omega Man Orson Welles was not asked to direct it, and the resulting movie turned out to be a huge disappointment to Matheson.  I asked Matheson if he had ever heard the phony story about Welles being interested in directing a movie based on his book:
RICHARD MATHESON: No, but I find that story amusing. I wonder if Charlton Heston even realized he was doing my book when he did The Omega Man? If he liked the book, he certainly didn’t allow much of it to remain on screen!
LAWRENCE FRENCH: So Orson Welles never indicated he wanted to make I Am Legend?
RICHARD MATHESON: No, not to me. I met Welles when they were making Touch of Evil at Universal. He was there looking at a rough cut of The Shrinking Man and he narrated to trailers for The Shrinking Man, as well.  But I hear stories like that all the time. Jim Nicholson (the President of American International Pictures) told me that when AIP was making deSade, John Huston, who was acting in the film had said, “I would have been happy to direct it, why didn’t you ask me?”  That made my day, after it was done so weirdly by Cy Enfield, because deSade was one of the best scripts I’ve ever written.
__________________
Now with the third version of I Am Legend about to arrive in theaters, it seems that Will Smith, like Heston before him, was drawn to the project on the strength of Matheson’s novel.
Here is the opening page from WB’s press notes:

Will Smith, the star of such films as “I, Robot,” “Independence Day” and “Men in Black,” is no stranger to science fiction and has long had an affinity for Richard Matheson’s timeless novel I Am Legend. “There are so many genres within it: horror, science fiction, and this wonderful character piece,” the actor says. “The psychology of being the last man on Earth has always intrigued me. The physical, emotional and spiritual lengths that Robert Neville has to go to just to survive present a beautiful opportunity to tell a universal story about the nature of humanity.”
Francis Lawrence, the director of the new science fiction action thriller based on Matheson’s tale, adds, “The idea of a man surviving cut off and alone in a modern urban environment was fascinating to me and one that I wanted to explore on film. ‘I Am Legend’ is the quintessential story of one man against the world, which is one reason why it continues to capture people’s imaginations more than half a century after it was first written.”
Complex and provocative, Matheson’s 1954 novel, widely recognized as a primer for the modern-day horror-science fiction genre, has influenced generations, inspired countless imitators and spawned two prior movie adaptations: 1964’s “The Last Man on Earth,” starring Vincent Price, and 1971’s “The Omega Man,” starring Charlton Heston.
Screenwriter/producer Akiva Goldsman, the Oscar-winning screenwriter of “A Beautiful Mind” and a self-proclaimed lifelong fan of the author, says that he relished the opportunity to re-imagine “I Am Legend” for the screen. “Richard Matheson is like a god to those of us who are science fiction geeks. There is a tradition within serious science fiction of reaching deeply into the roots of character to explore powerful themes—the idea of using science fiction as allegory. This film really grows from that ethic.”

While it’s nice to hear that the filmmaker’s admired Matheson novel,  I have a strange feeling that like The Omega Man before it, not much of Matheson’s book will make it to the screen. One ominous clue towards that conclusion is the credit on the new version stating it is based on The Omega Man screenplay written by John William and Joyce H. Corrington.  And earlier this year, Matheson himself seemed convinced that the new version would not be to his liking:
RICHARD MATHESON: I read somewhere that a writer is entitled to any kind of credit people want to give him; for any idea, whether he thought of it consciously or not. Now, I don’t happen to believe in that, but my son Richard claims that I Am Legend is a forerunner to AIDS, because it’s all about blood and a plague.  And now they are planning a new version of I Am Legend with Will Smith. They keep sending me outlines, but I’m convinced that they’ll never make the book. If they just shot the novel, step by step, it would make a good picture. When I wrote it, I made the mistake of not setting it far enough in the future. But if you go too far ahead you have to start thinking about the houses and cars and everything else. If you don’t go far enough, it will soon catch up with you.
LAWRENCE FRENCH: So when you wrote I Am Legend you didn’t consciously think of it as being a message against worldwide war?
RICHARD MATHESON: No, it was just a vampire story. I conceived it because I saw Dracula and it was scary, so I thought if everybody in the world was a vampire, it would be scarier.  I had no specific statement in mind, unless it was subconscious. Obviously, as a human being with a certain persona, I develop a theme, whether conscious or not. But I think it’s terrible for a writer to obviously go into anything when you write, because it will show.
__________________
Of course, next week we’ll know how closely Akiva Goldsman, the  “self-proclaimed lifelong fan of Matheson” has been to the book, but my guess is, to quote Marilyn Beck, “much of the original story will have to be changed to make it believable to today’s more with-it, more sophisticated audiences.”
RELATED ARTICLE: I Am Legend Book Review

4 Replies to “Supernal Dreams: Richard Matheson on I AM LEGEND”