The director reminisces about his trip aboard the Nostromo.

Old monsters never die. They just become familiar friends. We’ve seen it happen with classic fiends from the early black-and-white era, like Frankenstein and Dracula, but what about more recent more recent movie monsters, like the titular creature haunting the spaceship Nostromo in ALIEN (1979). Does the passage of decades turn what was once frightening into what is now merely quaint nostalgia? Has even the best example of its genre mellowed with age? Has the subsequent advent of computer-generated special effects rendered the old man-in-the-suit technology hopelessly dated in comparison?

There is no doubt that our perception of a film changes over time, but it is far from inevitable that a classic film must become, eventually, nothing more than a time capsule of its era. There are some films that can still be enjoyed as entertainment, not as museum pieces, and ALIEN is one of them. I should know. I was there at the Egyptian Theatre in Hollywood, watching the film on a Saturday morning during its original release in 1979. The historic Egyptian, one of the classic movie palaces from Hollywood’s golden era (it predates the more famous Chinese Theatre), was the perfect setting for the movie: the decor, suggesting a pyramid built from stone, was redolent of ancient mystery, which was abetted by the addition of props from the movie: alien eggs along the walkway to the entrance, space hardware strewn about the lobby, and (most impressive of all) the ill-fated alien “space jockey,” long dead but still seated at whatever mysterious controls it had operated in life.
The film itself was a galvanizing experience, with an intensity that never seemed to falter. In DRACULA, you could feels safe when the sun was up; in JAWS you could just stay out of the water. But in ALIEN there was no safe harbor, no safe time; you felt that the monster could strike anytime, anywhere. And worst of all, you could tell what the damned thing was! Extreme close-ups revealed what looked like row after row of metallic teeth, along with some kind of tongue that struck its victims with lethal force, and there seemed to be appendages (arms, les, and a tail – or was it a tentacle?), but only at the very end did you get a full-body view of the whole creature, one of the most memorable and elegantly designed monsters ever to grace the screen – as cool as the Creature from the Black Lagoon, although far less sympathetic..
Over twenty-five years later, the mystery of the alien’s appearance is long gone, as is some of the shocking impact, but the overall intensity remains, and the shock sequences ( the face hugger’s leap from the egg, the chest-bursters bloody birth) are still capable of sending first-time viewers leaping from its seats. If there was any doubt of this, it was overturned during a sold-out screening at the very same Egyptian Theatre where I first saw the film decades ago – part of a week-long tribute to director Ridley Scott, put on by the American Cinematheque. All this time later, ALIEN remains the definitive science-fiction monster movie, unsurpassed by the numerous sequels and rip=offs that followed in its wake. 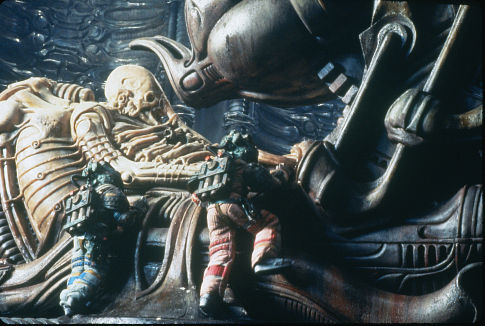 The final element that lifted the film ot the level of an A-class production was the orchestral score by Jerry Goldsmith. Despite their “stormy” working relationship, Scott credits the composer with making ALIEN work. “I was just thinking again tonight, ‘Thank god the score is absolutely brilliant.’ And I’m not yanking his chain. I think it’s one of his best scores, because it truly does nurse you through this story and leave you in a constant state of tension. I think without that score I couldn’t have let scenes run so long with nothing happening. I decided I wanted to stick to a certain rigid pace and not hurry it – just let things happen – and I think it’s pretty successful. To be perfectly honest, I was surprised how well it stands up.”
[serialposts]