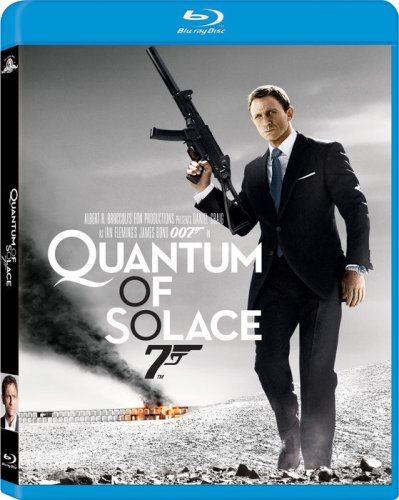 At a scant 106min, QUANTUM OF SOLACE is the shortest Bond film of the official Eon Production line, and the shortest in history after the made-for-television Casino Royale in 1954. Not that length matters (!), but it is a testament to the extent that series producers Michael G Wilson and Barbara Broccoli are willing to go to offer the public a suitably stripped-down and streamlined Bond experience.
In fact, QUANTUM removes so many of the historic bells and whistles of the character that there’s little left but a re-cast 4th entry in the Jason Bourne franchise (even the clever titles that spell out the location in various fonts are done in the same style as The Bourne Ultimatum). That’s not meant as an insult, just an expression of personal preference. We grew up in the 70s and our Bond was Roger Moore; his cocked eyebrow and knowing wink went down perfectly for younger viewers who never knew that the movies needed to be taken so deadly seriously. Moore knew the source of his appeal, and never worked quite as hard as Sean Connery to sell the increasingly outsized productions that surrounded the character from Thunderball onward. In fact, Moore’s patented performance style hadn’t changed much since his tenure as Simon Templar in The Saint – the role which initially brought him to the attention of the Bond producers – and this child of the “me decade” still hotly disputes any pejorative remarks about Moore’s interpretation of the character (interestingly, television commitments kept him out of On Her Majesty’s Secret Service in much the same way it prevented Pierce Brosnan’s Bond debut in The Living Daylights).
After Brosnan left the series (if that’s the story you believe) we were not at all thrilled with talk of the need to “re-imagine” Bond for the 21st Century – taking away the gadgets, the women, the drinking, and making James Bond into something more closely resembling an MI6 agent existing in the real world. Advance word that Daniel Craig (effective, if a bit miscast in the superb Munich) had a personal abhorrence for guns didn’t bode well, either, but like almost everyone else we were gobsmacked by 2006’s Casino Royale, a risky reboot for the series that jettisoned many beloved artifacts in favor of a more serious tone (Casino Royale is actually the third adaptation of Fleming’s story, after the aforementioned, and forgettable, television version, and the 1967 psychedelic hootenanny that must been seen to be believed). Realizing that all but the most ludicrous high-tech gadgetry elicit scarcely more than a yawn from contemporary audiences, the producers eliminated Q branch altogether, forcing Bond to use his wits and fists (and the ubiquitous GPS tracker) and making Craig easily the most physically agile Bond in history. Though digital assists abound, they are well hidden; gone are too-obvious stunt doubles of yore, replaced by an actor who seems genuinely capable of performing the demanding stunts on display. Villains were retooled as well, no longer dwelling in undersea superstructures or hollowed-out volcanoes and plotting the extinction of the human race; they now sold realistic weapons to realistic terrorists. All in all, it was a staggering transformation, not unlike walking into your grandfather’s garage expecting to see a Rolls Royce only to be greeted by a BMW concept car.
2008’s QUANTUM OF SOLACE picks up just a few moments after Casino ended, with the enigmatic Mr. White in custody and about to be rigorously questioned by Bond (Craig) and M (the suddenly indispensable Judi Dench), when a traitor reveals himself and allows White to escape. Records found in the traitor’s flat lead Bond to Haiti where he finds Dominic Greene (Craig’s Munich co-star, the very Polanski-looking Mathieu Amalric), who is chairman of an ecological group, Greene Planet – which is, of course, a front for a global organization called Quantum, specializing in terror, assassination, blackmail, and even the toppling of governments. It’s a deal for the latter that Greene is currently negotiating – aiding a Bolivian general’s proposed junta in exchange for a seemingly worthless patch of land in the middle of the Bolivian desert. While spying on Greene, Bond also eyes his mistress, Camille (Olga Kurylenko), whose family had been murdered by the general years earlier. Greene attempts to give Camille to the general as part of their deal, but she is rescued by Bond, who then follows Greene to Austria for a clandestine meeting of the Quantum group held during a performance of Tosca, where Bond learns that its membership reaches high into his own government.
This above plot sketch only really covers the film’s first half and even then I’ve omitted the return of Bond confidants Felix Leiter (again played by the great Jeffrey Wright, who really ought to be given more to do), Rene Mathis (Giancarlo Giannini, always welcome), and this installment’s “disposable” Bond girl, Strawberry Fields (Gemma Arterton), whose name and ultimate fate nicely bookend with an earlier film in the series. A major complaint from critics was that the film was difficult to follow, owing to its short running time and overstuffed plot, though we found no such difficulty.
However, it is true that at 106 minutes the film feels ‘paired down to essentials’ to the point that it almost stops feeling like a Bond film at all. Casino Royale ran nearly a half hour longer, yet actually felt shorter as the story had room to breathe. By comparison, viewing QUANTUM can feel like watching a film with the remote control in the hands of an impatient male teen who fast-forwards through all the “slow bits”. The first 20 minutes alone feature more choreographed fights, major stuntwork and effects than comparable action films fit in by the halfway mark.


Anyone seeking a replay of the unusually touching relationship between Bond and Vesper Lynd won’t find it here, as we found Kurylenko a significantly less interesting presence than Eva Green (as, it would appear, does Craig). Fortunately, the action sequences are spectacular – particularly a brutal chase and shootout in the opening section – and several of the locations (including the staging of the Quantum shareholders meeting and the spectacular eco-hotel in the middle of the Bolivian desert used for the film’s climax) are truly memorable. We don’t know what in director Marc Forster’s resume (which runs a narrow gamut from Monster’s Ball to Stranger Than Fiction) made him seem ideal for an action-heavy Bond picture, particularly one where the emotional content has been so greatly reduced from its predecessor It could be said that the director’s chair on a Bond film is the most sought-after second unit job in all the world, but that might sound crass, so we won’t. The show works just fine, and Forster deserves the credit.
The apparent measure of success for QUANTUM OF SOLACE is to have the character of James Bond work in the new millennium – to turn him from an outdated avatar of the martini & Playboy era into a living, breathing, and marketable commodity for today, and there’s no question that this has been accomplished. The viewer is left to decide for themselves how much of the series’ essence can be paired away before all that remains is just one more expensive– albeit effective – action picture.
The MGM/UA Blu-Ray is as sharp and detailed as we’ve come to expect from a major release. We saw the film at NYC’s greatest standing movie palace, the Ziegfeld Theater, and the disc faithfully reproduces that immersive experience. The image has retained some grain, which matches the Bourne-ish shooting style, and should please the DNR watchdogs out there. The DTS HD Master Audio is a nicely aggressive mix, the type that had this reviewer flipping through Crutchfield catalogs and wondering if it might be time to upgrade the sound system – it is one of the best sounding discs we have ever heard. The extras are of the EPK variety; interesting, but anyone who watched any of the making-of featurettes on television prior to the film’s release will notice a feeling of déjà-vu. All are, rather thoughtfully, presented in HD:

No crystal ball is required to tell that a more deluxe edition will arrive in time to promote the 23rd Bond film, but the previous Blu-Ray versions of Casino Royale seemed virtually identical to this reviewer, so don’t get caught unnecessarily double dipping.