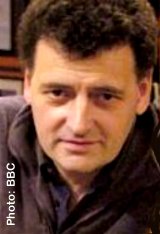 Den Of Geek reports that DOCTOR WHO producer Steven Moffat (SHERLOCK) will be writing five of the thirteen episodes of the sixth season of the revived series. (That’s 32 seasons in all, since 1963.)
Being interviewed  about his new modern-day Sherlock Holmes series SHERLOCK’s premeire episode, A Study in Pink,  Moffat confirmed that he’s writing the Christmas special, plus the five regular season stories.

“I’m basically following what Russell (Davies) did. Having worked out the sums and worked out how he does it, I thought that’s a perfect way of doing it.
But there is no way of balancing this. The last year has been extraordinary. I’ve had about four days off, and that includes Christmas day. I work every weekend, I get up early in the morning, I go to bed late at night. …Great fun, so long as it doesn’t kill me!”

It was confirmed back in March by the BBC that Season 6 will be of the standard thirteen episodes. Eleventh Doctor Matt Smith and companion Amy Pond (Karen Gillan) will be returning, with Alec Kingston and Arthur Darvill (River Song and Rory Williams) expected to reprise their roles as well.


Novelist, screen writer, and comic book author Neil Gaiman (The Sandman, MIRRORMASK)) revealed some time back that he’ll be writing one of the shows, possibly the third episode in the series.