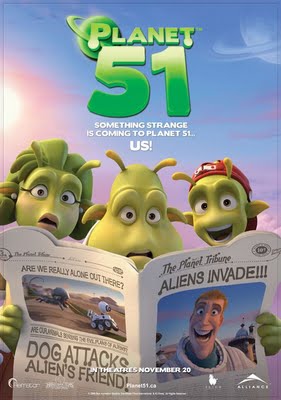 “Something strange is coming to their planet…Us!”

When I saw that tagline in the first trailer for PLANET 51, I thought folks could look forward to a nice little family-friendly animated film (and maybe I could get a clever Sci-Fi fix). It looked lively and I was rooting for it to be so.
Okay, so it isn’t all that. The concept is good, but nothing really materializes.
However, as I’ve said on behalf of a few other films, neither is it as bad as some critics have suggested. Then again, maybe I’m just an old softy…. Naw, that can’t be it. I’d say it’s more that I was willing to recognize the positives within it (I’m such a swell, open guy that way). That’s what I’m stickin’ to anyway.
For instance, the animation is more crisp and vibrant in spirit than many efforts from other smaller entities – although the movie was released in the U.S. by Sony’s TriStar Pictures division, its behind-the-scenes creative talent is comprised mainly of Spanish artisans. In fact, PLANET 51 was produced by Ilion Animation Studios and HandMade Films, both based in Spain’s capital (and largest) city of Madrid. This was a mighty interesting aspect of the production to me, and I was looking forward to watching work out of another country from which I don’t see a lot.
I did very much like the way the film moved. It had a blithe, well-paced click to it, and it was all quite colorful with plenty of potential to be entertaining. The concept itself is a likable aspect, too – it’s E.T.: THE EXTRA TERRESTRIAL in reverse. Because it’s an animated film, however, it’s sillier – sometimes for good and sometimes not. Without giving away plot specifics, that’s pretty much it in a nutshell, folks: it’s a simple alien-out-of-element concept with a light-hearted twist. In addition, a respected lineup of voiceover talent was employed, most of whom delivered pleasant performances.
With each of these important elements coming together, all of the stars should be aligned, right? Um, not quite. All of the ingredients are there; they’re just not cooked quite right, because no one ever bothered to write a clever “recipe” that would blend them together properly: you know, a script. That all-too-important, pesky little aspect that many filmmakers try to pepper over with big talent, showy visuals and, yes, money. Either that or they don’t know from the outset that they’ve got a weak scenario. I dunno which one of those two was the case with the producers of PLANET 51, but the trouble basically began at the opening of act two and haunted the piece to varying degrees throughout.
I could easily picture PLANET 51’s writer Joe Stillman (SHRECK, SHREK 2, KING OF THE HILL, and even BEAVIS AND BUTT-HEAD) sitting around and saying to a drinking buddy or two, “Hey, what about doing something like E.T., but we’re the aliens?” Then everybody goes, “Yeah, that’s a great idea! Where do we start?” Then Joe says, “Well, we’ve got this quaint ‘alien’ world where everybody pretty much lives and acts like we would, see? And then this ship lands and this ‘weird’ looking thing – you know, a human – comes out and…well, we’ll figure the rest out as we go.”
Unfortunately, they never did figure out the rest. The film begins just fine as we’re introduced to the world of Planet 51 and its inhabitants. It’s an entertaining and colorful opening resembling our 1950’s white-picket-fence era, and I thought to myself, “Yep, I’m gonna have a lot of fun with this one.” I mean, what’s not to love about teenage ‘aliens’ watching a drive-in movie with a giant “Humaniac” wreaking havoc on their poor little planet?
Then something goes wrong. It occurs not long after the creature from another planet lands and sets out to explore this ‘new world.’ The script runs out of true creative steam, and most of the rest of PLANET 51 feels as though its makers are just trying to fill time before wrapping things up.
One of the elements that struck this big kid most in this little area was the approach to Captain Charles “Chuck” Baker (Dwayne “The Rock” Johnson) from planet Earth. He’s a kind of a cocky, self-loving sort, which could have been fun, but because of a lack of development this aspect of his character feels a bit simple and forced, never really genuine. The filmmakers don’t strive for their own unique take on astronaut Captain Baker, and it hurts the overall tale. If this main character – the alien with whom the folks from Planet 51 must interact – isn’t well developed or at least more interesting than he turned out to be, there can be quite a bit of stumbling along the way. And so there was with the development of a few other characters and portions of story, too.
Still, I’d say PLANET 51 is worth seeing because its production design and general execution are snappy and fun to watch, and it’s one of the most ambitious animated films to come out of Spain (at a price tag of nearly $70 million, it’s certainly the most expensive). There are also plenty of references and homages that someone of (ahem) my age can generally enjoy. In the end I did admire what the filmmakers were trying to achieve. I just wish their mission had been fully accomplished. 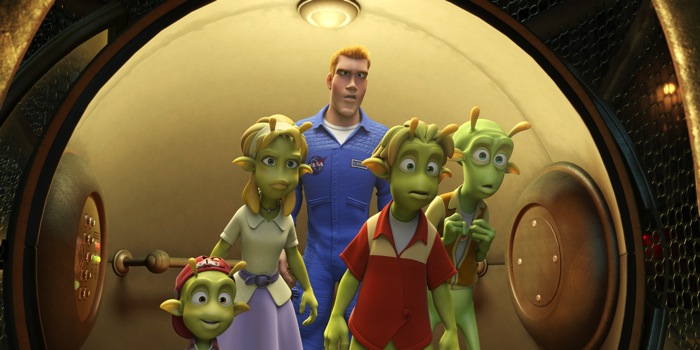