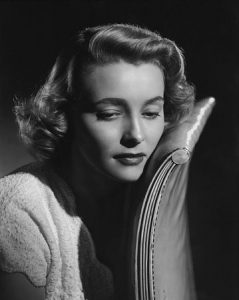 Patricia Neal, best known to Cinefantastique readers for her role in THE DAY THE EARTH STOOD STILL (1951) passed away yesterday, August 8th from cancer. She was 84.
Also appearing in a role similar to her character from DAY in STRANGER FROM VENUS (1954), the award-winning stage actor would go on to win an Oscar for HUD (1963).
Married to fantasy author Roald Dahl (Charlie and the Chocolate Factory) for many years, Patrica Neal had a series of strokes begining in 1965. She managed to overcome the debilitating attacks that affected her speech and ability to walk. Neal soon returned to acting, and would garner another Academy award nomination and three Emmy nominations.


Patrica Neal  also appeared in the macbre thriller THE NIGHT DIGGER (1971) and the film adaption of Peter Straub’s novel, GHOST STORY (1981).
However, her role as the widowed mother Helen Benson in DAY THE EARTH STOOD STILL is likely to be the most remembered, showing an ordinary woman who possesses intelligence, moral clarity and extraordinary bravery.  She trusts her judgement and the word of an alien to brave the military and face down a terrifyingly powerful robot — and thus forestall the end of the world.