EDITOR’S NOTE: Our next contributor chimes in with his pick for the most egregiously overlooked film of the year. It’s not exactly horror, but like NO COUNTRY FOR OLD MEN, ZODIAC is dark and disturbing enough to trump any and all conventional horror films.

By Andrew Fitzpatrick of the Blood-Spattered Scribe

Though only a serial killer film if you believe the Paramount marketing staff, ZODIAC has at least enough of one foot in the house to qualify as horror. It is also the best film of 2007. It could have been its March 3rd release date that saw it shut-out of the Oscars (because we all know that the best films don’t come out until September, right?) or the fact that, aside from a few welcome comic flourishes from Robert Downey Jr., none of the performances carry the stench of a desperate award grab that plague would-be worthy films like ATONEMENT. From the vintage studio logos that open the film to the canny use of one of the most sinister pop songs ever recorded at its conclusion, ZODIAC confounds the expectations that Fincher himself established with SE7EN over a decade ago. 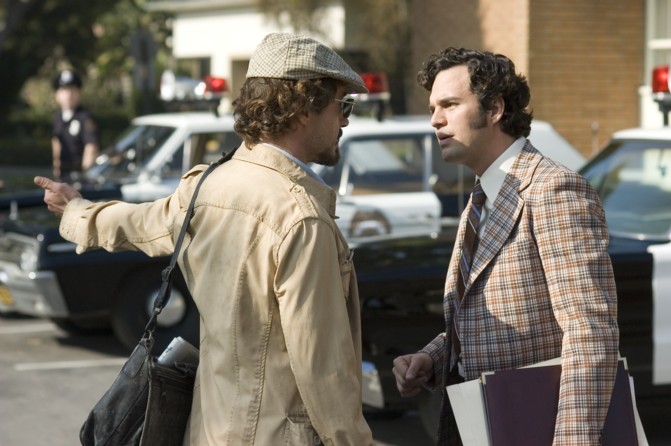 Anyone who grew up in the 70’s knows how well the decade’s details were nailed, but what surprised many was how restrained Fincher was in his storytelling. The killings, though graphically depicted and harrowing to watch, were front-loaded in the beginning of the film; informing the audience of how violent the crimes were without wallowing in their excesses in the way that nearly all other serial killer films that followed in SE7EN’s wake have done. Fincher crafts a story built around not catching a killer; we feel the frustrations of Inspector Toschi (Mark Ruffalo, whose nuanced, low key performance is a stunner), for whom the Zodiac represented professional disgrace, and cartoonist Robert Graysmith (Jake Gyllenhaal), for whom the case became an obsession that became increasingly difficult to explain.
Check out the complete article here.
RELATED ARTICLES:

4 Replies to “Overlooked by Oscar: Zodiac”