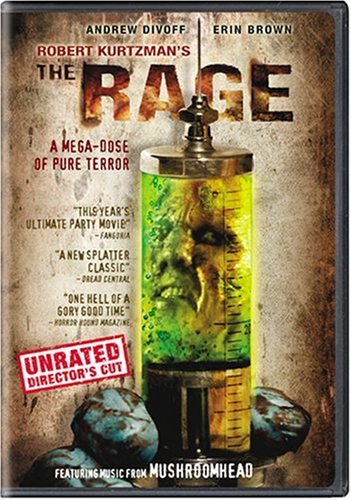 This is a splatter-filled tale that feels like a throwback to ‘80s direct-to-video horror, when a bunch of prosthetic makeup covered in blood was all you needed to make a low-budget movie. The minimal story is about a mad scientist (WISHMASTER’s Andrew Divoff) who creates a plague that unleashes an unstoppable rage in its victims. After an accident at the lab, the disease infects some vultures, which pursue a band of teenagers coming home from an outdoor music fest. The geysers of blood that follow are so over-the-top that they are perhaps meant to be funny; instead, they are simply monotonous. The film is too obviously a showcase for the carnage, which lacks intensity or humor. At least the prosthetics are technically competent: the vultures that bedevil our heroes are rendered with unconvincing computer-generated effects that suggest old-fashioned stop-motion (complete with squawking sound effects that seem lifted from a Ray Harryhausen movie).
As if to emphasize the retro feel, there are even dated dialogue references to the evils of capitalism that are supposed to explain the mad scientist’s motivation for unleashing the plague. Trapped in the role of raving Dr. Viktor Vasilenko, Divoff probably deserves some decent dialogue, but he ain’t gonna get it here, and he’s not good enough (who could be?) to overcome the atrocious lines he is given.
In the time honored tradition of exploitation films, THE RAGE provides just enough “character” scenes to convince you that a more pathetic bunch of losers is hard to imagine, and you might almost enjoy seeing them picked off, except the film is so awful that it’s hard to enjoy anything about it. The big innovation is that at the music festival, two of the chicks “got together,” and the naive innocent one is feeling ambivalent morning-after regrets. Needless to say, this dramatic thread is ripped to shreds long before it can be tied up; it’s just filler to hold your grab your attention, like the lesbo flashbacks in TOMBS OF THE BLIND DEAD.
Despite its short running time, the film seems to go on forever, with the obligatory scenes of the dispatched villain returning from apparent death. To top it all off, the mad scientist has an obnoxious dwarf assistant, who gibbers and growls inarticulately through some truly insipid dialogue – and the film offers up subtitles to make sure we don’t miss a single line! Thanks for nothing!

THE RAGE screened at Hollywood’s Screamfest horror film festival in October 2007, where director Robert Kurtzman (formerly the “K” in KNB Effects, the company that supplied makeup and monsters for many films directed by Sam Raimi) told audiences that he wanted to make a movie along the lines of Raimi’s THE EVIL DEAD. Unlike the high-powered gore film it sought to emulate, THE RAGE wound up going direct-to-video.
THE RAGE(February 26, 2007 – Home Video). Directed by Robert Kurtzman. Written by John Bisson, Robert Kurtzman. Cast: Andrew Divoff, Erin Brown, Reggie Bannister, Ryan Hooks, Rachel Scheer, Sean Serino, Anthony Clark.