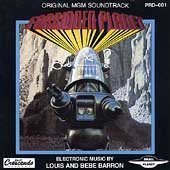 The Los Angeles Times brings us the sad news that pioneering electronic composer Bebe Barron has died, at the age of 82. Along with her then-husband Louis Barron, Bebe scored the 1956 science-fiction classic FORBIDDEN PLANET. Before the modern synthesizer, the duo created music using tubes and circuits that emitted tones, which they would record and manipulate, speeding them up, slowing them down, or splicing them together. The result was a unique, futuristic sonic landscape that perfectly captured the beauty and terror of Altair IV. In fact, the avante garde soundtrack, which bridged the gap between music and sound effects, was credited as “Electronic Tonalities” rather than music.
The Barrons also worked on Broadway shows such as VISIT TO A SMALL PLANET (1957), but they never scored another film (perhaps because the theremin took over as the electronic instrument of choice for weird sci-fi sounds). The couple divorced in 1970 but continued making music together until Louis died in 1989.  Bebe resumed composing in 2000 – a piece she called “Mixed Emotions,” which she considered a continuation of her work on FORBIDDEN PLANET.
In the cover story for Spring 1979 issue of Cinefantastique, Frederick S. Clarke and Steve Rubin detailed the making of FORBIDDEN PLANET, including a long section devoted to the work of Bebe and Louis Barron, which is excerpted below:

The rest of the article is available in the double issue Cinefantastique, Volume 8, Numbers 2 & 3.