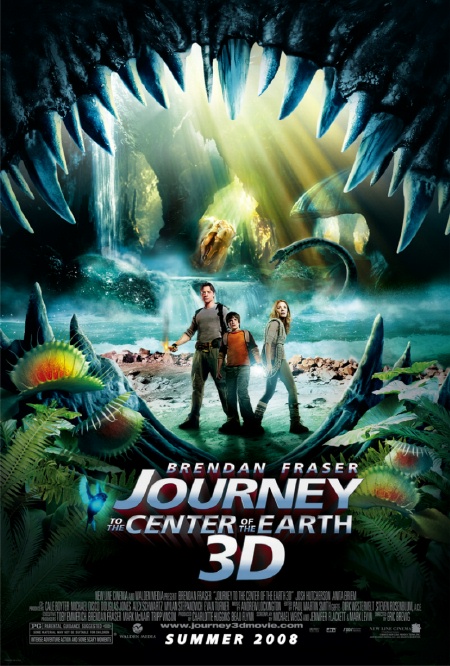 The Los Angeles Times notes that somewhere along the way, JOURNEY TO THE CENTER OF THE EARTH 3D shortened its title to simply JOURNEY TO THE CENTER OF THE EARTH. The 3D process was not abandoned, but exhibitors did not upgrade theatres as quickly as expected, creating a situation in which the original title would have been deceptive, because most engagements will be featuring a 2D presentation of the film:

The film’s producers were confident … that there could be as many as 1,400 North American theaters equipped to show “Journey” in its intended 3-D format by the film’s premiere, so that the film’s startling sea creatures (among other eye-popping effects) really would jump out of the water.
But as July approached, theater owners were converting their auditoriums to 3-D at a much slower pace than “Journey’s” makers anticipated, meaning there would be only about 800 domestic theaters ready to show the film in 3-D. Warner Bros. (which recently absorbed “Journey” maker New Line Cinema) was forced not only to shorten the film’s title by eliminating “3D,” but also had to tweak its advertising campaign to make clear that many theaters — about 2,000, in fact — would be showing the movie in the traditional two-dimensional format.

The article goes on to recount the now-familiar 3D story: Although box office grosses have remained steady thanks to rising ticket prices, actual admissions are down, and many Hollywood heavyweights think that 3D is a way to tear people away from their high-def televisions and videogames. Several major Digital 3D productions (including James Cameron’s AVATAR) are in the works, but so far exhibition is limited mostly to high-end theatres (including many IMAX theatres). Local theatre owners have been slow to purchase the expensive digital equipment. If JOURNEY turns out to be a hit, its success could light a fire under exhibitors.

One Reply to “News: Journey loses 3D – from the title, that is”