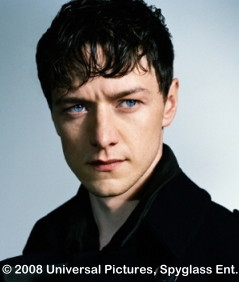 EW’s Hollywood Insider reports that James McAvoy (WANTED) has been cast as Charles Xaiver (Professor X) in 20th Century Fox’s X-MEN: FIRST CLASS.
The 30-ish actor will play a younger version of the MARVEL Comics character, as the film is described by Fox as charting “the epic beginning of the X-MEN saga.”

“Before Charles Xavier and Eric Lensherr took the names Professor X and Magneto, they were two young men discovering their powers for the first time. Before they were archenemies, they were the closest of friends, working together, with other Mutants (some familiar, some new), to stop the greatest threat the world has ever known.
In the process, a rift between them opened, which began the eternal war between Magneto’s Brotherhood and Professor X’s X-Men.”

Matthew Vaughn (KICK-ASS) is directing from a screenplay by Jane Goldman (KICK-ASS), Jamie Moss, and Josh Schwartz (CHUCK).
No word on who’ll be playing the young Magento as yet, with no other firm casting announced.
X-MEN film franchise creator Bryan Singer will produce with Lauren Shuler Donner and Simon Kinberg.
Filming is planned to begin this summer in England, for a June 3rd, 2011 release.