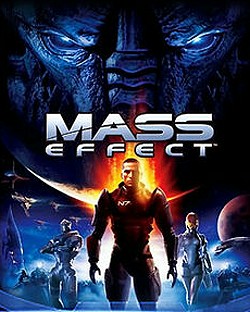 THR’s HeatVision Blog reports that the popular video game Mass Effect has been optioned as a feature film by Legendary Pictures (THE DARK KNIGHT).
Mark Prorosevich (I AM LEGEND) is said to be in talks to write the screenplay.
Former Marvel Entertainment head Avi Arad and Ari Arad are on the project as producers, along with Legendary’s Thomas Tull (WATCHMEN) and Jon Jashni (JONAH HEX).
Mass Effect is a science fiction combat role-playing game from BioWare and Electronic Arts which came out in 2008.
The “Mass Effect” of the title refers to the ability of individuals to tap into and manipulate “Dark Energy”, either naturally or with the aid of cybernetic constructs.
Set in 2183, it centers on Commander Shepard, a character that can be customized and played as either male (John) or female (Jane). He/She commands the starship Normandy, and recruits allies, human and alien, along the way to combat the galactic menace of The Reapers.
From what I understand of the game, the above is a great simplification of the plotline. It may well be that that one of the challenges of the writer will be picking and choosing what elements of the epic scenario to use.
(And I’m sure fans of the game hope it will indeed hew true to the established mythos—not always the case in these game to movie adaptations.)
A sequel, Mass Effect 2 was released in January of this year.