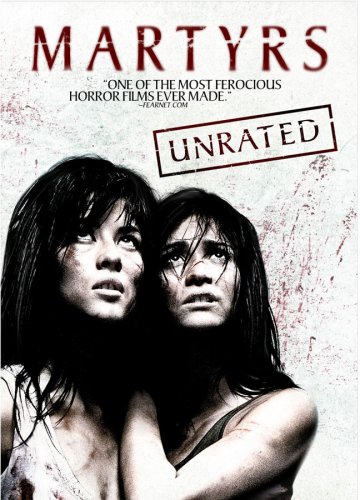 Pascal Laugier’s disturbing, brutal, French horror movie is not always comfortable to watch, but in contrast to the other recent torture-porn films, the torture in MARTYRS has a point.
At the beginning we see young girl Lucie escape from a facility where she has been chained to a chair and brutally tortured. Unable to speak of it, even to her close friend Anna (who takes on the role of both friend and surrogate mother), Lucie is tormented by the image of a girl she couldn’t save. She believes this girl is with her, and means her grave harm. At one point during their childhood, Anna finds Lucie in the bathtub alone, covered in cuts and gashes, cowering in the bloody water and saying “It wasn’t me, it wasn’t me.”
Fifteen years after her escape, Lucie has managed to track down those responsible, and she is determined to have her revenge. With her ghoulish and disfigured imaginary foe never far away, she bursts into an ordinary looking family home with a shotgun. When things gets out of hand, poor Anna gets involved, and the unbelievable decision to help her friend leads down a very frightening path. This is one of the major problems with this film. Anna’s decisions throughout are completely ridiculous. I was utterly bewildered when she rang her mother from the scene of a horrifying blood bath and told her she was fine! Calling the police, would surely have been the better option!
I don’t want to spoil the plot by saying too much, but suffice it to say that this is not your ordinary torture flick. There’s enough strange and shocking imagery to keep even the most hardened horror fan happy; in fact, the film is nothing but blood and shocks from beginning to end. It’s hard to believe that there can be a valid reason for anyone to treat another human being the way some of the people are treated in this film, but there is a reason and that’s what makes MARTYRS more than just another torture flick….but not necessarily better.
The filmmakers let us know that the word ‘martyr’ is derived from the Greek word ‘witness’ and in MARTYRS the point of the torture is to find a true martyr who can bear witness to the pain, the blindness that follows, and move through it to tell what lies beyond. Whilst this is a very interesting topic and I’ve no doubt there’d be many people curious to know what does lie beyond, I wish the reason had been more believable. It would surely take more than this curiosity to make seemingly ordinary people turn into sadistic torturers, and it is this nonsensical reasoning that weakens the film.
Unlike some shock horrors that have tongue-in-cheek moments, MARTYRS is dark and relentless. It doesn’t ease up, and it is not a pleasure to watch. As Anna is tortured she goes into her own world, and we don’t even have her screams to break the silence.
If you’re just looking for horror movie with shocking imagery and plenty of action that’s a little bit weird, then you will enjoy MARTYRS. Be warned, however: you could spend a bit of time shouting at the screen ‘call the police, for god’s sake, call the police!’
MARTYRS (2008). Written and directed by Pascal Laugier. In French with English subtitles. Cast: Morjana Aloui, Mylene Jampanoi, Catherine Begin, Robrt Toupin, Patricia Ulasne, Juliette Gosselin, Xavier Dolan, Isabelle Chasse, Emilie Miskdijan, Mike Chute.