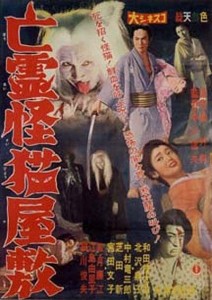 If Japanese director Nobou Nakagawa is known at all in the U.S., it is because of Jigoku (1960), an art-house perennial and the recipient of a Criterion Collection release on DVD and streaming services. This might lead western audiences to view Nakagawa as a highbrow artiste, but in truth the director had a successful career in the 1950s and 1960s as a director of modestly budgeted horror films, appealing to general audiences by presenting familiar genre tropes with a sense of impeccable craftsmanship.  The closest American equivalent from the era would be Roger Corman, but England’s Terence Fisher and Italy’s Mario Bava also come to mind: all three took material that could have been conventional in other hands and turned it into something remarkable.
A perfect example of this is Nakagawa’s atmospheric and intriguing entry in the Japanese Bakeneko or “Ghost Cat” genre, Borei Kaibyo Yashiki, known in the U.S. as Black Cat Mansion, though the title is sometimes translated as Mansion of the Ghost Cat (perhaps because, although a black cat is seen beneath the credits,  the ghost cat itself is definitely not black). The story follows a Japanese couple who, for the benefit of the wife’s health, move from the city to the countryside, where they take up residence in an old mansion, which doubles as their home and as a clinic. Unfortunately, the mansion turns out to be haunted by a malevolent spirit, which seems to be targeting the wife.
Inquiries reveal that, hundreds of years ago, the mansion was the scene of a ghastly crime, when a brutal lord murdered a samurai and raped the samurai’s blind mother, who committed hara-kiri after charging her pet cat with seeking revenge (“Lap my blood, and imbibe my hatred!”). After the mother’s death, the cat transformed into a humanoid spirit, killing off all members of the household, including the servants. Back in the present day, we learn that the tormented wife is a descendant of one of those servants – in effect, an innocent victim of a vengeful “grudge” that is not very discriminate about its victims.

The narrative of Black Cat Mansion is wrapped in three layers, including two levels of flashback. We start in the present, with Dr. Kuzumi (Toshio Hosokawa) roving through the corridors of a city hospital late at night while a black cat meows outside, reminding him of the time he and his wife (Yuriko Ejima) moved to the haunted mansion. This takes us to the events concerning him and his wife, which in turn leads to the extended flashback regarding the history of the mansion. The movie then returns step by step to the present, first to the story of Kuzumi and his wife at the mansion, then to Kuzumi at the hospital.
The symmetrical structure neatly organizes a story that might otherwise have seemed stitched together to achieve feature length (though only barely, at 69 minutes). We get a sense of going deeper and deeper into the past, like peeling back a proverbial onion to reveal an elusive mystery. The back-the-the-present structure also provides a sense of finality to climax that is a bit vague in its details (we know what happened, though why is not precisely clear – at least not to Western viewers relying on subtitles).
Nakagawa presents the material with several stylistic flourishes that transform the genre material into a distinctive form of popular art. The wraparound segment begins with the camera drifting past an unexplained scene of a body being wheeled through a darkened hospital hallway like a ghostly funeral procession – which Dr. Kuzumi’s voice-over totally ignores, as if his thoughts are too preoccupied to bother noting the weird visual flashing before our eyes. Totally unrelated to the narrative, the scene serves only as visual warning sign, an omen of the supernatural horrors to come.

When Kuzumi and his wife arrive at the mansion, the scenery is straight out of the horror movie playbook, right down to the ominous raven perched atop a branch of one of the many wild plants apparently reclaiming the land from the disused property. Nakagawa films the scene in a simple, elegant long shot, slowly tracking to follow as the front gate is opened and the characters enter; the effect is to make the audience feel as if they, too, are crossing a borderland into a different world, a slightly dreamy landscape where anything can happen. The effect is punctuated when the extended take is broken by a single insert closeup, as the wife sees a mysterious woman within a side building – only to find that the ghostly figure is gone when Kuzumi comes to see.
As effective as these touches are, the present day footage is a bit methodical in its buildup, as the ghost’s presence becomes gradually more intrusive, entering the premises, killing the family dog (off-screen), and eventually attacking the wife. Black Cat Mansion truly comes to life when it enters its extended flashback: the uncanny creepiness of the present day scenes are replaced by a overtly horrific melodrama that is more full-blooded and colorful – quite literally so, as the present days scenes are shot in blue-tinted black-and-white, while the period footage is in color.
Nakagawa immediately captures a convincing sense of a household living in fear of its temperamental master. There is an awful sense of inevitability as the events build to the murder and rape, reaching an emotional crescendo as the blind mother begs the pet cat to be her avenger, then takes her own life, after which the cat dutifully licks up the dead woman’s blood. The revenge that ensues is bizarre to say the least, with the actual cat soon replaced by a human with cat-like features, who sows mayhem and discord, leading to the deaths of not only the guilty lord but of innocent victims as well.

The makeup of the Ghost Cat appears slightly absurd to modern eyes, but it works well enough in longshot and shadows; some of the best scenes feature the character silhouetted against translucent screens. The action uses some simple camera tricks to create bizarre imagery: jump-cuts and reverse motion imbue the vengeful cat with supernatural powers. The matter-of-fact impact of these simple effects adds a touch of low-key believability to the otherwise unbelievable scenes.
SPOILERS: With the back story filled in, the film returns to the events at the mansion, where the wife suffers a final attack before the hiding place of the murdered samurai’s body is revealed. Black Cat Mansion then returns to the opening scene at the hospital, where Kuzumi’s wife appears and asks to adopt the cat we heard meowing earlier. The return to normalcy offers a refreshing sigh of relief after what came before, but the wraparound feels a bit like the opening and closing footage of Invasion of the Body Snatchers (1956), which used a similar structure to stitch a happy ending onto what had been intended as a pessimistic story. How did Mrs. Kuzumi survive the final attack, which apparently left her dead? Was the ghost cat exorcised by the revelation of the hidden body? Apparently so, but the film is not saying for sure. Viewers simply have to accept the ending as if emerging from the depths of a nightmare, back to a waking world where the past truly has been laid to rest, and life can go on with no residual fear of innocuous felines. END SPOILERS.
Black Cat Mansion is not a masterpiece that will sway the uninitiated. It is, however, a fine example of well-executed genre material, handled with serious intent and dedicated craftsmanship. Fans of old-fashioned horror looking for something beyond the standard list of classics should be satisfied, as should anyone with an interest in cult Japanese cinema, especially cineastes seeking the roots of modern J-horror (for example, with his feline yowl, Toshio from the Ju-On films is clear descendant of the ghost cat genre). Even cat lovers may get a kick out of the lengths to which a beloved pet will go to right the wrongs inflicted on its master and mistress. A dog may be man’s best friend; a cat, however, is a ruthless undead avenger.