Influential author and screenwriter passes away. Works included I AM LEGEND and WHAT DREAMS MAY COME.

Multiple sources (including io9 and the Guardian Express) are reporting that author Richard Matheson – the man Stephen King cited as the greatest influence on his work – has passed away at the age of 87. The news originated with a Twitter post by his daughter, announcing that her father had passed away after a long illness.
It is quite literally impossible to exaggerate the significance of this news. The world of horror, fantasy, and science fiction has just become smaller, now that one of its major lights has been extinguished. Although Matheson’s heyday as a novelist and screenwriter was decades ago, his work continues to inspire others. The recent hit REEL STEEL (2011), starring Hugh Jackman, was inspired by his work, and Matheson had been shopping his back catalog (over 150 novels, short stories, and screenplays) around to studios, with the plan of bring the material to the screen only with the author’s oversight and approval.
Matheson’s horror, fantasy, and science fiction novels include I Am Legend, The Shrinking Man, A Stir of Echoes, Hell House, Bid Time Return, and What Dreams May Come, all of which were adapted into films, usually with the author working on the screenplay. His short stores filled over half a dozen paperback collections; many of them found their way in front of the camera, either for films or television.


Matheson got his break into the feature film business when Universal Pictures sought the rights to film The Shrinking Man, which became THE INCREDIBLE SHRINKING MAN (1957). As part of the deal, Matheson insisted that he be allowed to write the adaptation. Although the final version was reworked by Richard Alan Simmons (to get rid of the flashback structure), Matheson received sole credit, and was pleased with the result, except for the ending, which he felt over-stated the point he made in his book, when protagonist Scott Carey shrinks to infinitesimal size but realizes he will not cease to exist because “to Nature there was no zero.” In the movie, the line became, “To God there is no zero. I still exist.”
I’m not sure whether it is on record anywhere, but Matheson’s attitude toward THE INCREDIBLE SHRINKING MAN mellowed in his later years. During a question-and-answer session after a screening in Hollywood a few years ago, he dismissed any ill feelings about the ending, saying it was essentially what he wrote. (Matheson may have “got religion” during the interim. His early science fiction novels have a strong existential streak running through them; his later fantasy stories often deal with life after death, particularly What Dreams May Come, which includes a legnthy bibliography of non-fiction source material.
After THE INCREDIBLE SHRINKING MAN, Matheson went on to a busy career in films, which including adapting numerous other books and stories to the screen for such classic films as THE DEVIL RIDES OUT (1968, a.k.a. THE DEVIL’S BRIDE), starring Christopher Lee; BURN, WITCH, BURN (1962, a.k.a. NIGHT OF THE EAGLE), based on Fritz Leiber’s Conjure Wife; and MASTER OF THE WORLD (1961), based on two novels by Jules Verne.

For producer-director Roger Corman, Matheson stretched the work of Edgar Allan Poe to feature length, often expanding the short stories into what were essentially original screenplays: HOUSE OF USHER (1960), THE PIT AND THE PENDULUM (1961), TALES OF TERROR (1962), and THE RAVEN (1963). The latter two added comedy to the horror mix, a formula Matheson attempted again with his original script for THE COMEDY OF TERRORS (1963), which was directed by Jacques Tourneur (I WALKED WITH A ZOMBIE).
For the small screen, Matheson penned numerous episodes of THE TWILIGHT ZONE, including two starring William Shatner (“Nick of Time” and “Nightmare at 20,000 Feet”). He also scripted the STAR TREK episode “The Enemy Within,” which split Captain Kirk into his good and bad selves. His other episodic work includes WANTED: DEAD OR ALIVE; HAVE GUN, WILL TRAVEL; THE ALFRED HITCHCOCK HOUR; THE GIRL FROM U.N.CL.E.; LATE NIGHT HORROR; JOURNEY TO THE UNKNOWN; Rod Serling’s NIGHT GALLERY; CIRCLE OF FEAR; and Steven Spielberg’s AMAZING STORIES.
In the 1970s, Matheson wrote several made-for-television movies, beginning with DUEL, based on his Playboy short story. Directed by Steven Spielberg, and starring Dennis Weaver as a driver mercilessly hounded by a big rig truck apparently out to kill him for no reason, the film is a classic thriller.

Matheson then teamed up with producer Dan Curtis, scripting such telefilms as THE NIGHT STALKER, about a vampire in modern day Las Vegas. Other collaborations included THE NIGHT STRANGLER; TRILOGY OF TERROR; and DRACULA (whose lost-love-reincarnation plot greatly influenced Francis Ford Coppola’s BRAM STOKER’S DRACULA).
Later work included TWLIGHT ZONE: THE MOVIE (1982) and JAWS 3-D (1983). Most of his subsequent screen credits (nearly 20 since 1990) are for previously published stories that were adapted into films, such as the  big-budget version of I AM LEGEND (2007), starring Will Smith. He also wrote the novels Earthbound (1989) and Now You See It… (the latter adapted from his stage play).
Matheson’s influence on the horror genre is incalculable. Outside of the 1950s science fiction films, horror and monster movies tended to use period settings; the traditional Gothic atmosphere seemed essential to establishing an atmosphere that would make the incredible events believable. However, this also established a distance between the cinematic events and the every day life of the audience. Matheson pioneered the art of placing horror in suburbia – not in a forgotten European castle, but right next door, and sometimes not as far away as that.
In Matheson’s novels, all manner of strange and bizarre things can happen in your very home- such as a daughter disappearing into another dimension in the TWILIGHT ZONE episode “Little Girl Lost.” Even when Matheson did opt for an isolated location, as in Hell House (which became THE LEGEND OF HELL HOUSE on screen), the setting was contemporary, and there was a patina of scientific verisimilitude that made the horror convincing. 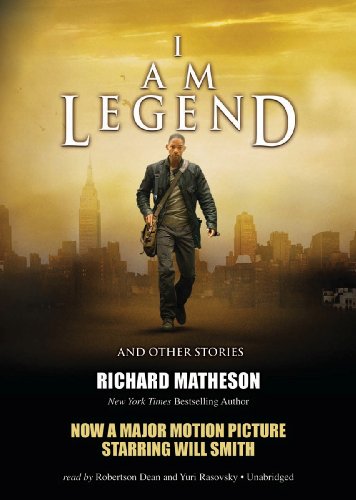 Besides the numerous official adaptations of his work, Matheson’s shadow extends far and wide, reaching all the way to the recent release of WORLD WAR Z. Matheson’s novel I Am Legend (about a world overrun by vampires, leaving only one human alive) provided the inspiration for George A. Romero’s NIGHT OF THE LIVING DEAD (1968) (which basically turned Matheson’s blood-drinkers into flesh-eaters). Romero’s later DAWN OF THE DEAD (1978) expanded the first film’s narrow scope to an apocalyptic scale, suggesting that the walking dead were eclipsing humanity. This became the template for all the zombie apocalypse tales to follow, including not only WORLD WAR Z but also THE WALKING DEAD.
Sadly, the greatness of Matheson’s novel has never been captured in the official film adaptations, which shy away from the existential shock of the ending, in which hero Robert Neville realizes that, in a new world of vampires, he is the outcast; he is the monster:

Normalcy was a majority concept, the standard of many and not the standard of just one man.
[…] To them he was some terrible scourge they had never seen, a scourge even worse than the disease they had come to live with. He was an invisible specter who had left for evidence of his existence the bloodless bodies of their loved ones. […]
Robert Neville looked out over the new people of the earth. He knew he did not belong to them; he knew that, like the vampires, he was anathema and black terror to be destroyed. […] A new terror born in death, a new superstition entering the unassailable fortresses of forever.
I am legend. 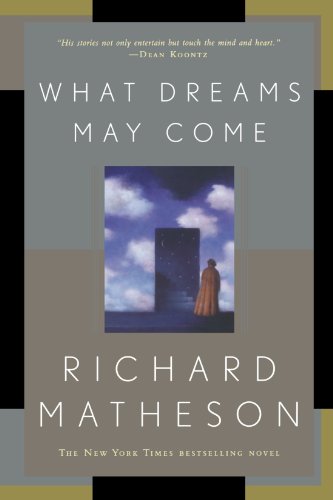 His fantasy novels What Dreams May Come and Bid Time Return (the latter adapted in 1980 as SOMEWHERE IN TIME) are marked by a deep commitment to romantic love – which is portrayed as strong enough to outlive time and survive death itself. The films, although earnest and sweet, do not live up to the source material, which in both cases strives to sell the potentially treacly ideas with genuine dramatic conviction. (Even confirmed atheist Harlan Ellison, in his Los Angeles Times review of What Dreams May Come, admitted that Matheson made a damn convincing emotional argument for the afterlife.)
That is the thought which I hold in my mind now, more than the handful of times when I saw him in person, affably answering questions about  his work and autographic his books. I imagine him somewhere on the other side, whispering to us (or more probably to his surviving family members, like Robin Williams in the screen version of WHAT DREAMS MAY COME): “I still exist.”
Perhaps that is not quite the epitaph the author deserves. Better to note this profound truth:
For those of us with a Sense of Wonder, Richard Matheson was – and is – Legend.