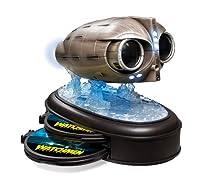 Tuesday July 21st’s DVD and Blu-ray releases offer something for cinefantastique fans of every stribe, whether your personal tastes run toward science fiction, fantasy, or horror. The top title of the week, at least in terms of sales figures, is WATCHMEN. The sprawling plotlines of Alan Moore’s well-regarded graphic novel did not translate well to the celluloid form, but the film’s muddled storytelling and slagging pace did not impede ticket sales, which turned WATCHMEN into a science fiction blockbuster. On disc, the film arrives in four iterations: a single-disc widescreen DVD of the theatrical cut, a single-disc full-screen DVD of the theatrical cut, a two-disc special edition DVD of the director’s cut, and a Blu-ray disc with the director’s cut, plus Amazon Digital Bundle, Digital Copy and BD-Live. Did I say four iterations? Well, there is a fifth one, sort of: you can purchase the Blu-ray version housed inside a miniature statue of Night Owl’s floating ship. It’s the perfect gift for the graphic-novel-loving maniac in your family!
Up next is CORALINE, Henry Selick’s darkly enchanting 3-D stop-motion film version of Neil Gaiman’s fantasy novel. A fairy tale that may be a touch scary for the little tykes, CORALINE is now available as a single-disc DVD, a two-disc Collector’s Edition DVD, and a Blu-ray/DVD Combo, plus Digital Copy. All three versions include the film in 3-D.
THE MESSENGERS hardly seemed good enough or successful enough to warrant a sequel, but that did not stop Ghost House Productions from unleashing THE MESSENGERS 2: SCARECROW on us. This time, Danish director Martin Barnewitz replaces the Pang Brothers. A prequel, rather than a sequel, MESSENGERS 2 hopes to undermine audience expectations by offering a few unexpected twists. We’ll see if Barnewitz (who helmed the excellent ROOM 205) can pull it off…
For television fans, theres the Complete Second Season of PUSHING DAISES, the vastly over-rated show that died a well-deserved death. If that’s not enough for you there’s also STARGATE SG-1: CHILDREN OF THE GODS, the ROBOT CHICKEN spoof of STAR WARS: EPISODE II, and an import titled SKELETON CREW, about a film crew that stumbles upon a mental institution where thirty years earlier the mad doctor running the place made a series of snuff films starring his patients.
[serialposts]