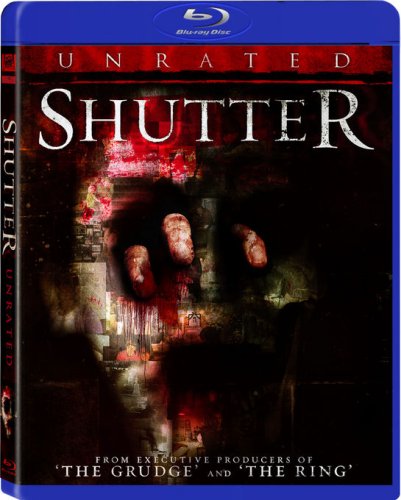 This is an oddball week for home video releases: there is not much that qualifies as great, but if your tastes run toward cult entertainment, or if you are willing to check out something  different from the run-of-the-mill Hollywood fare, then the available offerings might interest you. The week’s high-profile horror release is SHUTTER, the American-Japanese remake of the creepy 2004 Thai film. It is no worse than other Asian-inspired remakes have been, and there are a few decent scares, but overall this is a somewhat mechanical affair. The film is available in three forms: an R-rated DVD, an unrated widescreen DVD, and an unrated Blu-ray disc. Since this style of horror relies on suggestion rather than shocks, the unrated version probably has little more to offer, although perhaps the relatively tame sexual content has been enhanced a bit.
TRAPPED ASHES seems tailor made for cult fans: it’s an old-fashioned horror anthology (like CREEPSHOW or, going further back, TALES FROM THE CRYPT), with episodes directed by Joe Dante (THE HOWLING), Ken Russell (ALTERED STATES), and Sean Cunningham (FRIDAY THE 13TH). Unfortunately, it is not a very good film, but fans should get a kick out of seeing their favorite veterans working again.
Another film that aims for cult credibility is  THE BEACH PARTY AT THE THRESHOLD OF HELL. The title is almost the best thing about this film, which has an amusingly off-hand approach toward its outrageous post-apocalyptic storyline; it would have been great as a short subject, but it wears out its welcome at feature length. Still, with a bunch of friends and some kind of mind-altering substances, this would probably be a great party film: you don’t really have to pay attention during the boring parts to get a chuckle out of the occasional gross-out moment.
As for the rest of the week’s releases, there is PENELOPE, which could be the movie for those enamored by the image of Christina Ricci wearing a pig’s snout. Season One of SAVING GRACE and Season Two of EUREKA are also newly available, plus Volume 2 of the SWAMP THING series. And in an attempt to cash in on the recent theatrical release of JOURNEY TO THE CENTER OF THE EARTH, an obscure foreign version, titled THE FABULOUS JOURNEY TO THE CENTER OF THE EARTH (a.k.a. WHERE TIME BEGAN) makes another appearance on DVD.
All of these titles and more are available in the Cinefantastique Online Store. Shopping there helps support us and keep the website going.