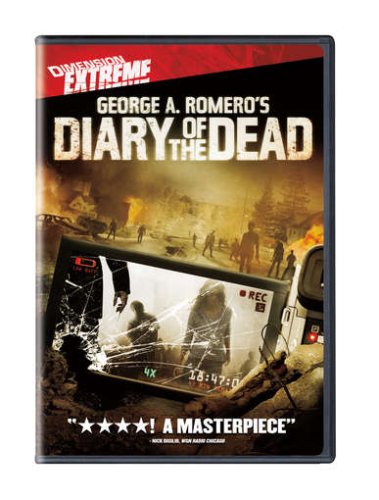 It is one of those weeks: almost everything released for home video – at least when it comes to cinefantastique – is either an old title being repackaged or some obscure direct-to-video property of little interest. Fortunately, there is at least one big, bright shiny piece of news for horror fans: the DVD release of George A. Romero’s DIARY OF THE DEAD, which received a small, platform theatrical release earlier this year. On the “Dimension Extreme” label (which emphasizes visceral horror titles, often direct-to-video), the DVD includes several bonus features: a look behind the scenes; a makeing-of featurette; a visit to the set; plus and audio commentary by Romoero, cinematographer Adam Swica, and editor Michael Doherty. There are also twenty minutes of character confessionals that were deleted from the final cut, plus audio outtakes from Guillermo Del Toro, Simon Pegg, and Stephen King, who provided voice-overs for various radio announcers heard in the film. Finally, there are five short zombie films that were included based on a MySpace contest asking aspiring filmmakers to provide their take on the subject.
Timed with the release of DAIRY OF THE DEAD is a 40th Anniversary DVD of Romero’s original NIGHT OF THE LIVING DEAD. This title has appeared on disc several times, including a wonderful “Special Collector’s Edition” from Elite Entertainment ten years ago that was loaded with bonus features. That version is officially out of print (although you can still find copies at some retailers), so the new DVD (which includes many of the same features) may make a nice substitute for those who do not already own the older version.
The rest of the week’s release offer little that is new and interesting. SHORT CIRCUIT comes out on Blu-ray and on a specail edition DVD, presumably working on the theory that the upcoming WALL-E will get viewers primed for movies about cute robots. Working on a similar theory, the complete second season of the TV version of THE INCREDIBLE HULK comes out, which may give you fans something to do while waiting for the new movie to hit theatres (I’m presuming none of you are whiling away the hours watching and re-watching 2003’s HULK, which apparently the stuiod hopes everyone has forgotten).
ANGUISH, a pretty dreadful horror film with some pretentious ideas about the relationship between audiences and horror films, gets a DVD release. There is a direct-to-video fantasy adventure called LOST COLONY, starring Adrian Paul.
Finally, if you are in a mood for some giggles – or if you are simply a fan of old sci-fi flicks, you might consider “Directed by Roger Corman,” a three-disc collector’s edition that includes THE TERROR, CREATURE FROM TEH HAUNTED SEA, THE WASP WOMAN, and LITTLE SHOP OF HORRORS. Corman is one of the most important figures in the history of genre entertainment, but most of these films date from before he really hit his stride. They are little low-budget quickies that he churned out on two-week schedules. I wouldn’t want to argue that the results were great cinema; I tend to think of these as “earn while you learn” projects, which show Corman developing the talent that would reach fruition in his wonderful adaptations of Poe, starring Vincent Price, such as TALES OF TERROR and THE MASQUE OF THE RED DEATH. There are flashes of talent and some good ideas on display, and the movies are fun, especially when (as in the case of LITTLE SHOP and CREATURE) they were clearly intended as comedies.
Next week’s DVD releases include several Dario Argento titles (timed for the upcoming release of MOTHER OF TEARS), some low-budget H.P. Lovecraft adaptations, and a bunch of familiar titles (TREMORS, PITCH BLACK, WHITE NOISE, SERENITY) re-released at the budget price of $12.99. Check them out here.
RELATED ARTICLES: