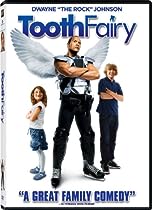 This Tuesday offers not much exciting for fans of horror, fantasy, and science fiction. The only recent theatrical release making its home video debut is TOOTH FAIRY, starring Dwayne Johnson as a reluctant – you guessed it – tooth fairy. The film is available in DVD and Blu-ray. Julie Andrews co-stars.
For fans of classic and/or cult films, there is one bright spot: the Blu-ray release of John Carpenter’s ESCAPE FROM L.A. Less exciting is FIRST SPACESHIP ON VENUS, with a new DVD released hosted by “Mr. Lobo,” whoever he is.
As for the rest, PULSE and SICK NURSES ended stuck together in a double DVD pack. There are a few DTV titles: VAMPEGEDDON and DARK NATURE (which was supposed to have come out a week or two ago). The old Fred Olen Ray opus EVIL TOONS makes another appearance. And several old DR. WHO titles arrive from the John Pertwee and Tom Baker era.