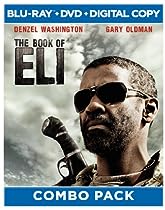 Sanctuary, SUPERNATURAL, THE BOOK OF ELI, THE STEPFATHER