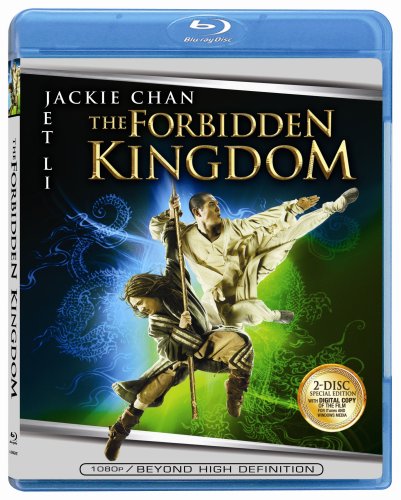 Halloween is looming on the event horizon, and a sort of advance guard is appearing on your local video store shelves in the hope of infiltrating your DVD collection even before October rolls around. But these terror titles have not overwhelmed the competition yet; there are some high-profile fantasy and science-fiction titles, just enough to remind you that the Season of Fear has not officially started. Chief among thse is THE FORBIDDEN KINGDOM, an imaginative if not wholly satisfying attempt to merge Hollywood film-making with Chinese mythology. Although aiming to be a mythic adventure, the film feels more like a knock-off of WIZARD OF OZ, but it’s still fun, thanks to the first ever pairing of martial arts superstars Jet Li and Jackie Chan. The film is available in four versions: DVD, Special Edition DVD, Two-Disc Special Edition DVD, and Blu-ray Disc.
Kaiju fans can run screaming in terror from a double giant monster attack in the form of RODAN and WAR OF THE GARGAUNTUAS. Both of these Japanese titles were somewhat altered for their U.S. release, and it has been hard to find them in their original form until the advent of DVD. This two-disc set is from Classic Media, the company that gave us several fine Godzilla DVD releases last year (e.g., GOJIRA/GODZILLA, KING OF THE MONSTERS). As with those discs, these contain both the Japanese original and the altered American versions. (RODAN suffered from some bad dubbing that added an unnecessary voice-over narration. GARGANTUAS was re-dubbed to eliminate the connection to FRANKENSTEIN CONQUERS THE WORLD, and re-editing made U.S. co-star Russ Tamblyn more prominent.)
Art house afficianadoes may enjoy BEAUTY AND THE BEAST: Essential Art House. This is a new DVD release of Jean Cocteau’s 1946 masterpiece, one of the great fantasy-horror films ever made. The film previously received the lavish Criterion Collection treatment, so ardent collector’s probably already own it. If you do not, now’s the time to do yourself a favor.
There is mucho mass this week. TV fans can rejoice in the release of SMALLVILLE – The Complete Seventh Season. The elaborate Russian fantasy epic of Good and Evil, NIGHT WATCH (whose sequel DAY WATCH was recently released on DVD) returns on Blu-ray disc; presumably, the timing is intended to capitalize on the fact that director Timur Bekmambetov had a recent blockbuster hit in America with WANTED.
Other than that, shelves are filled with horror, mostly old titles – although some are arriving on DVD for the first time. For example Fox Horror Classics Volume 2  (previously discussed here) offers up a trio of eerie tales CHANDU THE MAGICIAN, DR. RENAULT’S SECRET,  and DRAGONWYCK (the last being an exceptionally good and very atmospheric effort starring Maestro of Menace Vincent Price).
The otehr horror titles have all been here before, but now they are back again, hoping that the upcoming Halloween season will inspire you to complete your collections. There is  a PUMPKIN HEAD Collector’s Edition, A SPECIES Collection (plus a limited edition Trilogy Collection featuring a bust of Sil). The Headless Horseman rears his…uh, shoulders….again in Tim Burton’s SLEEPY HOLLOW. EVENT HORIZON offers haunted house horror in outer space. And WHAT WAITS BELOW dives into the depths of a lake to find its angry ghost.
These titles are all available here in the Cinefantastique Online store, or you can browse for them below.