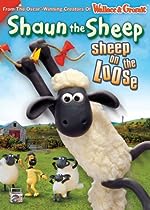 In my previous Laserblast column, I was lamenting the dearth of new science fiction, horror, and fantasy on home video , but the passage seven days is making last week look like a time of plenty. Today, there are almost literally no new cinefantastique releases worth mentioning. The highlight of this week’s meagre output is probably SHAUN THE SHEEP: SHEEP ON THE LOOSE, being the further adventures of the character introduced in Nick Park’s Oscar-winning stop-motion short subject A CLOSE SHAVE, starring Aardman Animation’s beloved Wallace and Gromit.
Fans of the 1970s cult film LET SLEEPING CORPSES LIE (a.k.a. THE LIVING DEAD AT MANCHESTER MORGUE) will be curious to see director Jorge Grau’s previous horror film now available on DVD. THE LEGEND OF THE BLOOD CASTLE is a variation on the Elizabeth Bathory legend, of a noblewoman who tried to maintain her youth by bathing in the blood of virgins.
Other than that, there ain’t much. Television fans can perhaps console themselves with a REAPER: SEASON 2 DVD box set. And there’s a direct-to-video film clled GHOSTS OF GOLDFIELD, starring former wrestler Roddy Piper (of John Carpenter’s THEY LIVE).