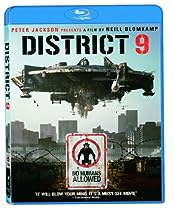 It’s the last Tuesday before Christmas – meaning it’s the last release date for new horror, fantasy and science fiction on home video – so you might be expecting a glut of last-minute shopping opportunities. No such luck. This week’s batch of releases offers only a couple of interesting titles; fortunately, one of them is a biggie.
DISTRICT 9. – We had our head in the sand when the Sci-Fi film of the year was released this fall; therefore, unfortunately, we cannot comment on it one way or another. The reviews and reaction to the allegorical action tale – concentrating on the appearance of an alien-filled UFO hovering over Johannesburg and their subsequent detainment in a shantytown – were overwhelmingly positive, even if the close resemblance to Alien Nation went largely unmentioned. Is it the masterpiece everyone says it is, or are the film’s correlations to South Africa’s very real history of racial segregation a bit too ‘on the nose’? The owners of almost any media device will be able to find out for themselves this week when the film is released in single and double-disc DVD editions, in addition to a Blu-Ray release (it’s even getting released on one of those PSP cartridges – are they really still making those?) Extras include the usual commentary track, deleted scenes, featurettes, etc. But the BD release also contains a few exclusive features, including “Joberg from Above: Interactive Map of Satellite and Schematics of the World of District 9” and a God of War II demo for PS3.


THE PHILADELPHIA EXPERIMENT. – The phrase “Starring Michael Pare and Nancy Allen” hasn’t been used much since 1984, when this well-regarded time travel film was first released, but we’re always happy to spend time with two of our favorite early ’80s headliners. In 1943, the US Navy conducts an experiment to make the USS Eldridge invisible to enemy radar, but as happens with most secret experiments of this ilk, things go horribly wrong and only two sailors (Pare and Bobby DiCicco) are able to get off the ship before it disappears completely. The pair finds themselves in the present-day (well, present day in 1984) Nevada desert and have to piece together what happened and make their way back in time and prevent the ship from getting sucked into a time-worm- void-hole. It’s been a while since we last laid eyes on Phily, and we hope that time has been charitable to this enjoyable, low-budget effort from New World Pictures. There doesn’t seem to be anything spectacular about this version (likely just another Anchor Bay catalog re-issue) – which is too bad because we’re dying to find out whatever happened to DiCiccio – once a high profile player for Spielberg (1941) and Sam Fuller (The Big Red One) before vanishing like a battleship in Philadelphia. DVD only.
This week’s other releases include Four Course Meal, a rather obvious attempt to simulate the look of an old EC horror comic, and a three-disc set of Kazuo Umezz’s Horror Theatre. The later is an anthology of 50-minute films, shot on video, based on stories by manga artist Kazuo Umezz; various well-known J-horror filmmakers were involved, including director Kiyoshi Kurosawa (PULSE) and screenwriter Hiroshi Takahashi (RING).
Come back next week, when things pick up with the release of Paranormal Activity, Jennifer’s Body, 9, and Carriers (starring Chris Pine before he became Captain Kirk).