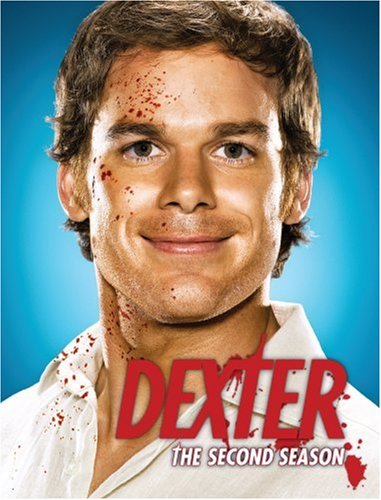 The home video releases are not particularly inspiring this week, consisting of remakes. prequels, and multi-pack collections of obscure titles, but there is one bright spot: the box set of DEXTER – The Complete Second Season. For those of you who do not have Showtime, there is your chance to catch up on the adventures of TV’s most likable serial killer. How can a serial killer be likable, you ask? Well, the television series sets him up as something closer to a vigilante: growing up, Dexter was coached by his adopted father, a cop, to sublimate his homicidal urges by tracking down and exterminating murderers who had escaped the justice system. The stories gets most of their juice from watching Dexter maintain an outwardly normal life, working as blood specialist for the police forensic department, while keeping his dark side hidden from everyone, even those close to him. The series toys with the question of how much Dexter really feels (is he just a chameleon, maintaining a facade to survive, or doe she really care about those around him?), but attentive audiences have no trouble identifying with him: he’s a lonely guy, messed up, trying to do the best he can with the hand fate has dealt him.
Another television series reaches store shelves this week: TERMINATOR – THE SARAH CONNOR CHRONICLES  – The Complete First Season arrives on DVD and on Blu-ray disc. If you love yourself some cyborg action, go for it!
After that, we have a vague Hollywood attempt to cash in on the theatrical release of THE MUMMY: TOMB OF THE DRAGON EMPEROR with THE SCORPION KING 2: RISE OF A WARRIOR. In case you forgot, the Scorpion King was introduced in THE MUMMY RETURNS, then spun off into his own film. SCORPION KING 2 is a direct-to-video prequel, showing how the Scorpion King became the Scorpion King. Frankly, I find these back-story explanations fairly interminable, but the temptation to explain a character’s origin seems almost irresistible in Hollywood (as witness the upcoming STAR TREK film). You have three options to buy SCORPION KING 2: widescreen DVD, full screen DVD, and Blu-ray disc.
If it’s not prequels, it’s remakes. PROM NIGHT, which did above average for a low-budget horror film when released earlier this year, is now available on disc in three forms: an unrated DVD, the theatrical cut on DVD, and an unrated Blu-ray version.
Another remake that no one really needed is the new version of THE WIZARD OF GORE – although the casting of Crispin Glover in the lead does add a note of interest to this one. This is based on the old H.G. Lewis schlock-fest that was so memorably excerpted in JUNO last year – about a magician whose tricks (sawing a woman in half, etc) are not illusions at all but reality.
THE UNSEEN is a moderately interesting cult title, made by in the days when Barbara Back was considered a star thanks to her appearance as a Bond girl in THE SPY WHO LOVED ME. There is a certain admirable low-budget chutzpah to the idea of making a horror film set in Solvang, the Danish community in California. Bach plays a TV reporter who is covering the annual Danish festival, only to run afoul of a local psycho (Sidnely Lassick doing the Norman Bates routine). Although not great by any means, the film deserves some credit for merging the then-current slasher movie trend with more old-fashioned psycho-horror underpinnings, and there are a few nice twists on the usual gender roles (you’ll get a chuckle out of what happens when Bach’s races to the rescue at the end). Director Danny Steinmann (here working under the pseudonym Peter Foleg) went on to direct FRIDAY THE 13TH: A NEW BEGINNING, then apparently retired.
As for the rest of the week’s releases, they are mostly compilations: Maneater Series Collection – Volume 2 (Volume 2?!), Catacombs of Creepshows 50 Movie Pack, 6 Films to Keep You Awake, Mortuary of Madness 50 Movie Pack, Masters of Darkness 100 Movie Pack, Tales of Horror 100 Movie Pack, Boris Karloff Collection 20 Movie Pack, Bloody Nightmares 100 Movie Pack, etc, etc. – you get the idea. I haven’t bothered to do side by side comparisons, but I’d be willing to be that many of these box sets recycle lots of the same titles over and over again.
One other DVD collection worth mentioning: Amazon.com announced August 19 as the release date for the Disney-Pixar Ultimate 8-Movie Collection, but the box set is not currently available at the online store. Maybe it sold out, but at least one vendor has it available at eBay, and Costo is reportedly selling it for $99. (UPDATE: This box set turns out to be a Costco exclusive, which is why it is not available online, except for “used” sets, apparenlty purchased by third party vendors at Costco.) The box contains:

Oh, and just in case you have a real masochistic streak, there’s a two-pack of BLOODRAYNE and BLOODRAYNE 2. Can’t imagine anyone who would proudly display this on their shelf at home; it will probably end up tucked into the back of a closet, right next to the stack of “adult” magazines.
You can find these titles and more for sale below, or you can shop for August 19 releases in the Cinefantastique Online Store. Remember, when you purchase here, you help keep the Sense of Wonder alive.